Many things can cause itchy, irritated skin in dogs. But if you’ve noticed your dog is scratching and biting at red, pus-filled blisters or pimples, he may have a pyoderma, or a bacterial skin infection.

If your pup has a breakout that smells icky or just seems to be a constant bother, that’s your cue to call your veterinarian.

Wondering what’s gotten under your pup’s skin? Read on to learn everything you need to know about pyoderma in dogs, including what causes it, whether it’s contagious, and how to treat it. 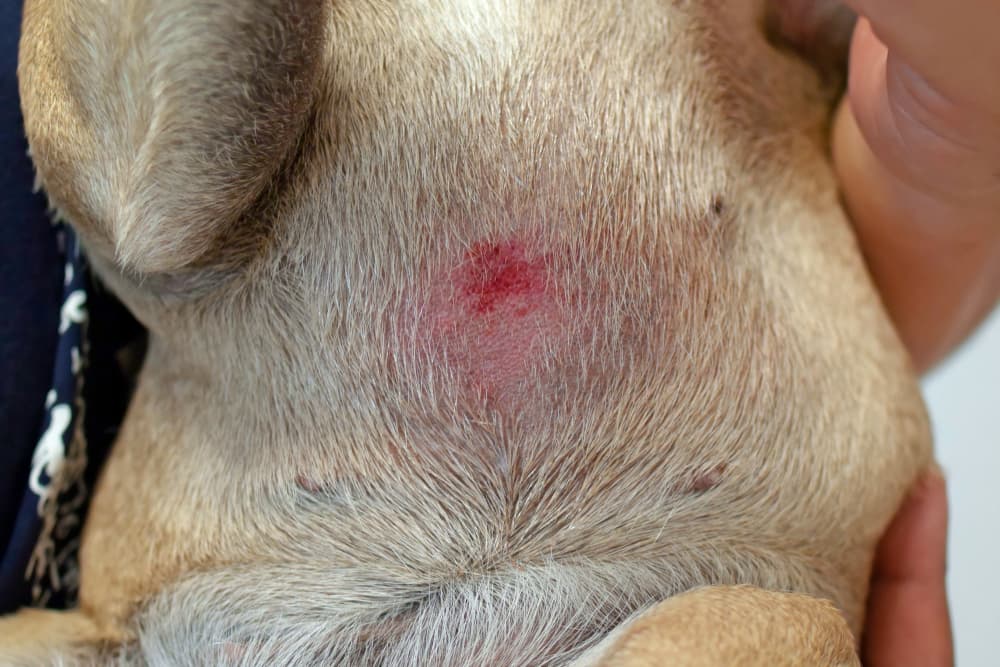 Pyoderma is veterinarian-speak for a bacterial skin infection where pus (‘pyo’) is present in the skin (‘derma’), often in the form of pimples, bumps, or oozy hot spots (‘moist pyoderma’). Dogs of all ages and breeds can develop pyoderma, which is often referred to as impetigo in puppies.

In most cases, dogs have superficial pyoderma, which is just what it sounds like: an infection that affects the outermost layers of skin as well as surrounding hair follicles (this is called bacterial folliculitis).

Sometimes, though, dogs develop a deep pyoderma, in which bacteria invades and infects deeper layers of skin as well.

Is Pyoderma in Dogs Contagious?

In itself, pyoderma is not contagious. However, some of the causes of a pyoderma can move from dog to dog or be shared, such as fleas.

What Causes Pyoderma in Dogs? 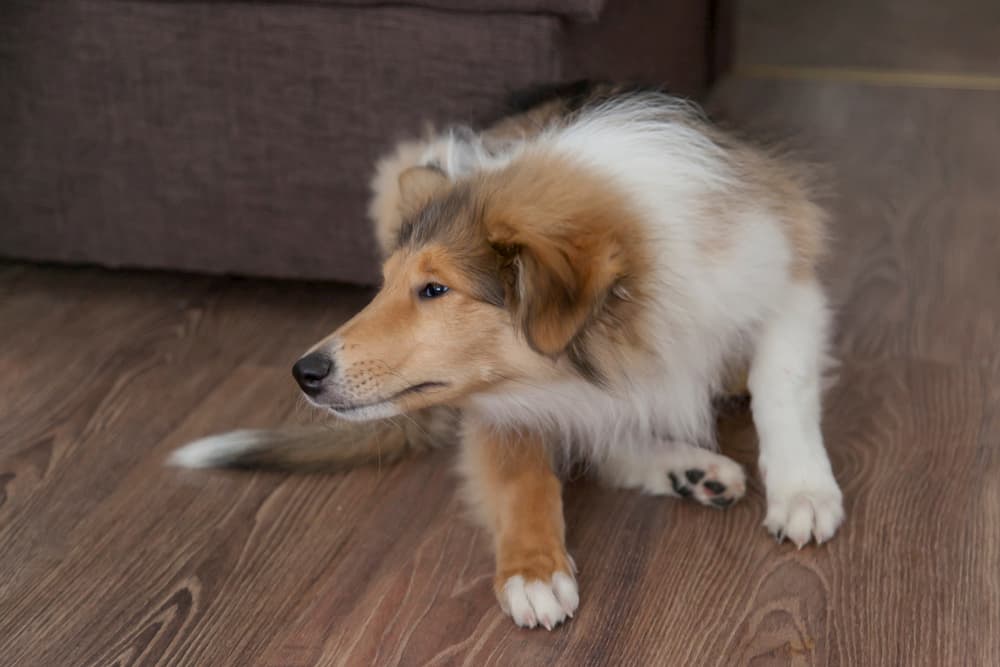 It’s important to understand that pyoderma isn’t something your dog just gets, but rather something that could develop from something else, says Collier.

Risk factors for a pyoderma include (1):

Furthermore, moist lip, skin, neck folds, and nail beds serve as the perfect environment for bacterial or yeast overgrowth and a resulting pyoderma. This puts breeds with wrinkles, including Bulldogs and Shar-Peis, at risk of developing a pyoderma, says Dr. Jennifer Pearl, assistant director of the Animal Medical Center of Mid-America in St. Louis City and Maryland Heights, Missouri.

Symptoms of Pyoderma in Dogs

Early signs of pyoderma in dogs are hard to ignore because your pup is likely to be biting, licking, and scratching away at red, inflamed skin. You may notice red bumps, pimples, and crusted skin, as well as hair loss, says Collier.

Puppies with impetigo tend to develop small, red bumps in areas such as their underarms, belly, and groin, though dogs can develop pyoderma anywhere on their skin.

Your dog may be dealing with pyoderma if he has any of the following symptoms (2):

If you notice any type of rash or redness on your dog’s skin that doesn’t go away or if your dog is spending a lot of time scratching and chewing at his skin, contact your veterinarian to schedule an exam, advises Pearl. 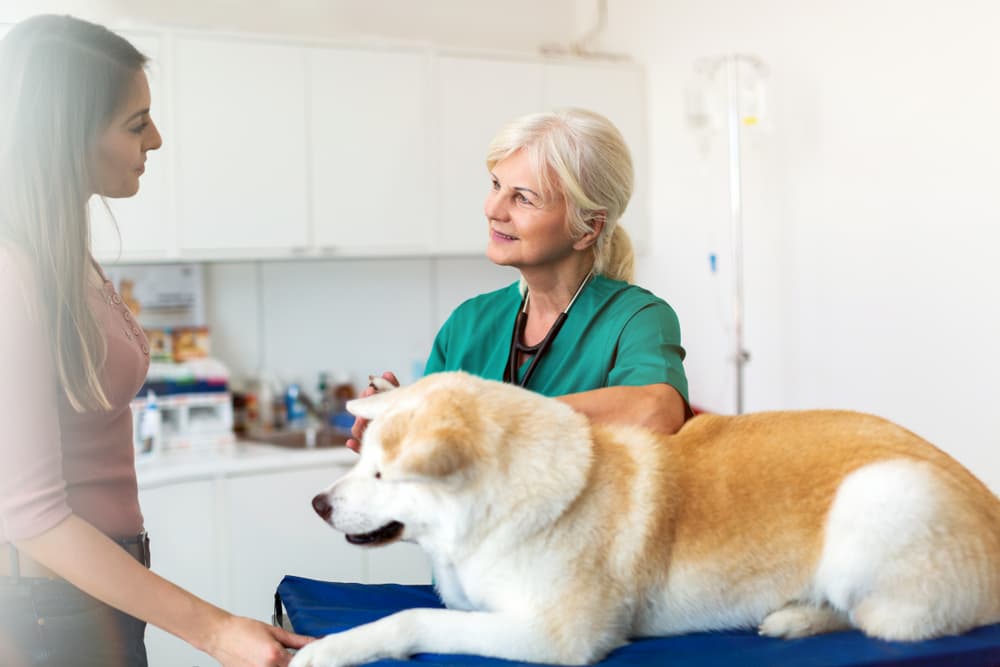 When you visit your veterinarian, a physical exam and tests can help them figure out whether or not your dog has pyoderma or another condition, says Pearl.

Typically, tests include skin cytology (which allows your veterinarian to view skin cells under a microscope to identify bacteria or yeast causing the infection), a fungal culture (which can be used to check for ringworm fungus), skin scrapings (which can reveal microscopic mange mites), and a sensitivity panel (which determines which antibiotic will be most effective).

How to Treat Pyoderma in Dogs

At first, pyoderma in dogs can be scary—a fiery red rash could be anything, and no one wants to see their dog uncomfortable or in pain. But thankfully, most cases of pyoderma in dogs clear up with proper veterinary care and a little TLC.

Treatment of pyoderma in dogs involves eliminating infection, says Collier. Antibiotics such as Cephalexin and Cefpodoxime generally do the trick and are well-tolerated.

Additionally, the following can help repair your pup’s skin and make them feel more comfortable:

For dogs with chronic health conditions that make them more prone to pyoderma, it’s essential to treat and manage the root cause as well, says Pearl.

For example, dogs with allergies can benefit from the corticosteroid Prednisone for short-term relief from itching, while prescription allergy medications could be used for longer-term relief.

As your dog heals from their infection, grooming around the area can make the process easier. “Some patients with long and thick coats benefit from the coat being clipped to improve contact with the medicated shampoos or other topical agents used,” explains Collier.

Because bacterial infections can require several weeks of therapy, a re-check or progress exam is typically performed two weeks after your initial veterinary visit to make sure the infection has cleared, says Collier.

Ultimately, though, it’s crucial to figure out what’s causing the pyoderma. If your dog’s infection doesn’t clear up or itchiness continues after treatment, your veterinarian may need to run additional tests.

Blood screening for organ function and blood cell counts is often recommended, as well as thyroid testing. Special blood testing for other hormonal diseases or allergies may also help clarify what’s at the root of your dog’s discomfort.

Cost to Treat Pyoderma in Dogs

However, the cost of treatment can vary vastly depending on other health conditions your dog may have and where you live and are seeking help, says Pearl.

How to Prevent Pyoderma in Dogs 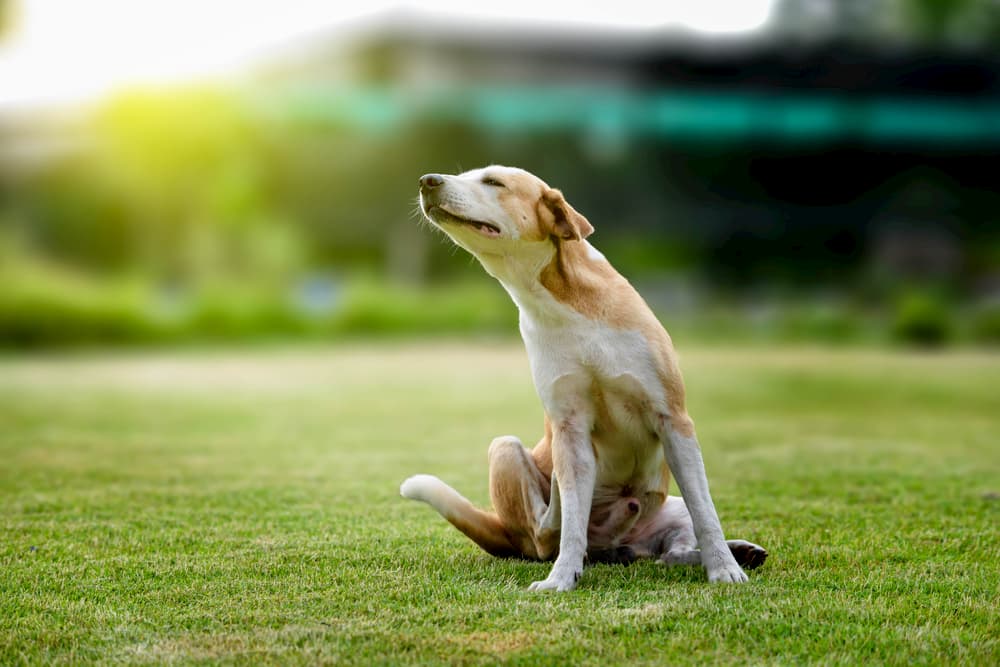 If your dog has skin folds or a long coat, regular bathing and grooming can help keep pyoderma from developing.

The best method for preventing pyoderma from coming back is to address underlying health issues such as poor nutrition, parasites, and allergies.

Your veterinarian can help direct you toward appropriate dietary changes, parasite preventatives, and long-term medications.

Cassie Shortsleeve is a freelance health and lifestyle writer based in Boston, Massachussetes. She has years of experience researching, interviewing, and investigating trends, and writing for the web and in print. Her writing has appeared on MensHealth.com, Men's Health, Yahoo!, WomensHealthMag.com, Women'Her work has been published in national magazines including Men's Health, Women's Health, Shape, and Conde Nast Traveler.