The fear of loud noises is a normal evolutionary response that has helped humans and dogs alike survive by running away from or fighting off threats to our existence. However, some dogs may develop a severe irrational fear or phobia to certain sounds in their lifetimes.

Noise phobias in dogs are actually pretty common. Based on a recent study, an estimated 39 percent of dogs show some symptoms of noise fearfulness (1). Noise phobias are also commonly seen together with other behavioral disorders such as separation anxiety and general anxiety disorder.

Read below to find out why a fear of loud noises is so common in dogs, how to recognize noise phobias in your pooch, the most common sounds that scare dogs, and what you can do to help your frightened pup. 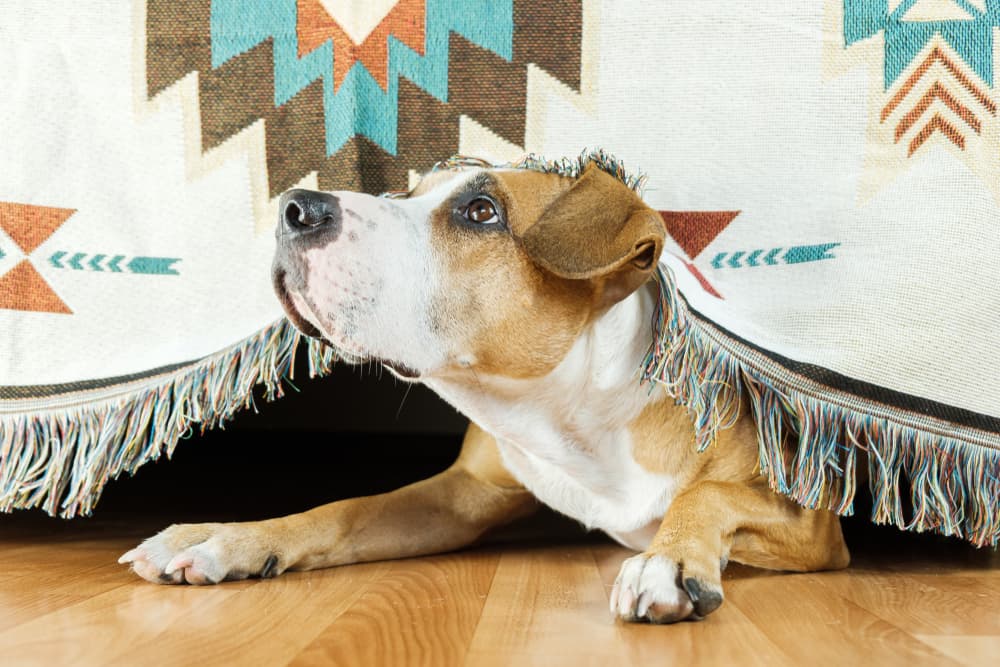 Noise phobias in dogs are abnormal, intense reactions to one or more sounds. Some of the most common examples include fireworks and thunder. What causes some dogs to develop noise phobias while others have no reactions to loud sounds is not yet completely understood, but environmental and genetic factors are thought to play a role.

Dogs that were poorly socialized as puppies are thought to be at an increased risk for noise phobias. Puppies have what is called a “critical socialization period” which ends at about 12 to 14 weeks of age. This means that if puppies aren’t exposed to certain sounds, sights, animals, or places in a positive manner by that age, they may develop an abnormal fear response to those things when introduced to them later in life.

Traumatic events can also lead to a fear of certain noises in dogs. For example, a dog that is left at home with a chirping smoke alarm all day or with a noisy construction project going on next door, may associate these noises with separation, fear, and loneliness. These events can traumatize a dog and induce a severe reaction to those noises and similar noises in the future. 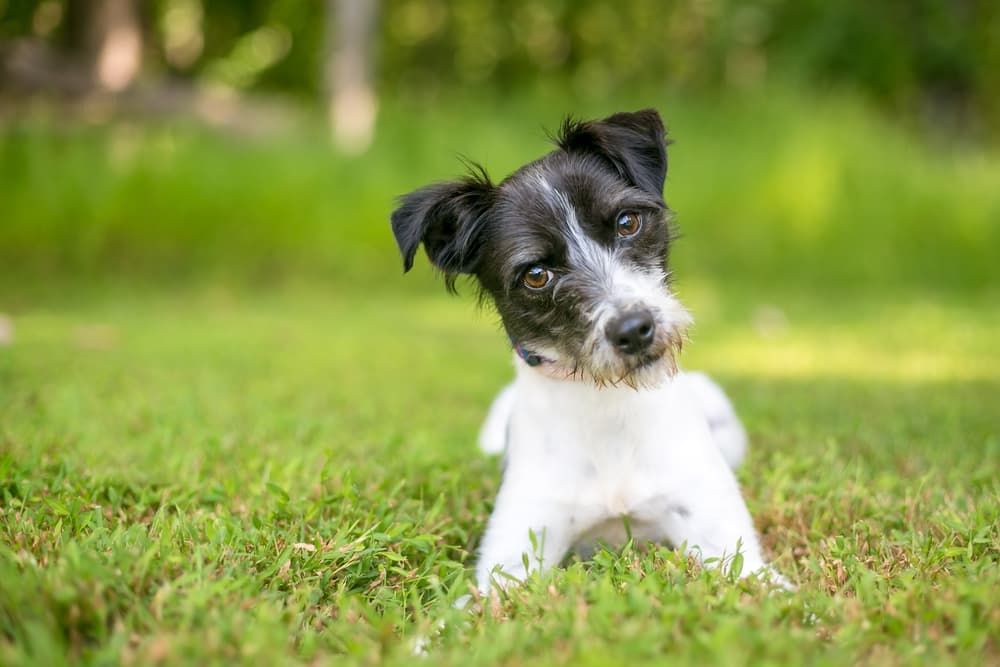 Dogs do have much more sensitive hearing than humans and this may be partially to blame for their noise reactivity. A sound that is loud to us is experienced at a much higher volume by our dogs. Dogs can also hear sounds at higher frequencies or pitches than humans. We humans can only hear at frequencies up to 20,000 Hz, while dogs can hear frequencies up to 45,000 Hz (2). This means that sounds and noises that are at very high pitches aren’t even detected by the human ear but are heard loud and clear by our canine companions.

Certain breeds of dogs are overrepresented when it comes to noise phobias, strongly suggesting that there is an inherited component to this condition. It is thought that German Shepherds, Australian Shepherds, and Border Collies are genetically prone to these phobias. 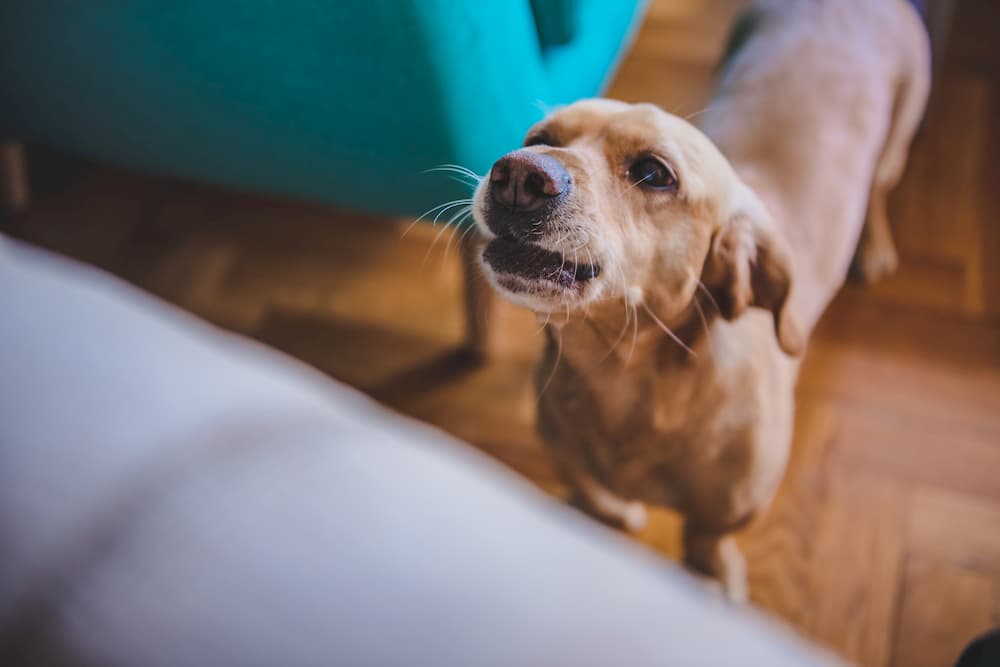 The following behaviors may be displayed in noise phobic dogs when they hear sounds that scare them:

In dogs with severe cases of noise phobias, they may cause severe harm to their teeth, nails, and other body parts when attempting to escape the noise. 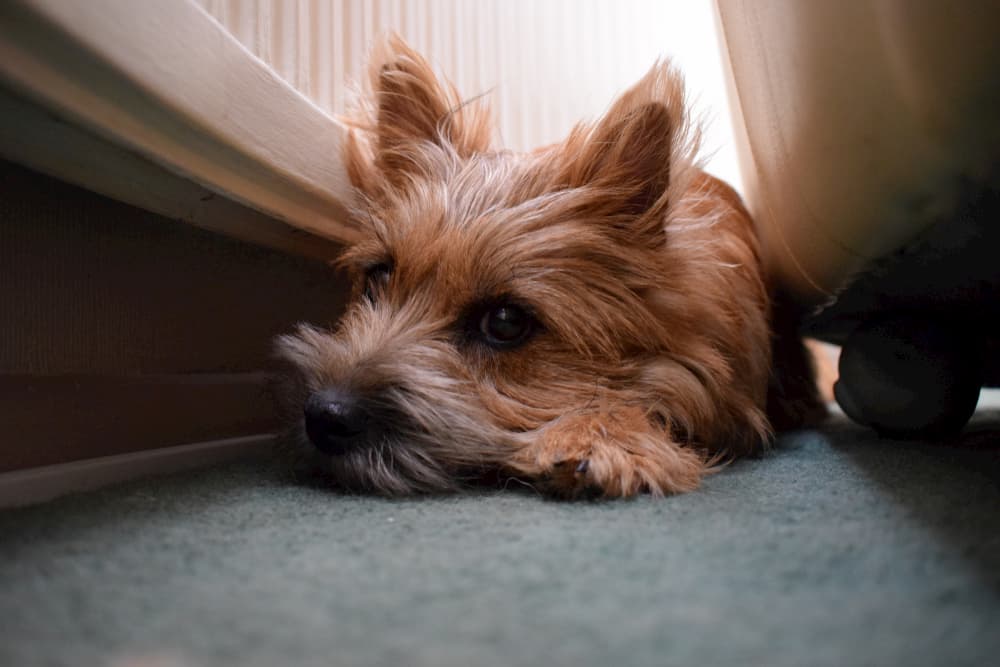 Knowing which noises commonly scare dogs can help you manage your pup’s fear. Here are some noises that may frighten your dog:

Thunder noise is one of the most common scary sounds for dogs. But besides the loud booms that are caused by thunderstorms, changes in barometric pressure, the smell of rain, and the appearance of storm clouds may all be involved in causing the fear that is induced by storms. 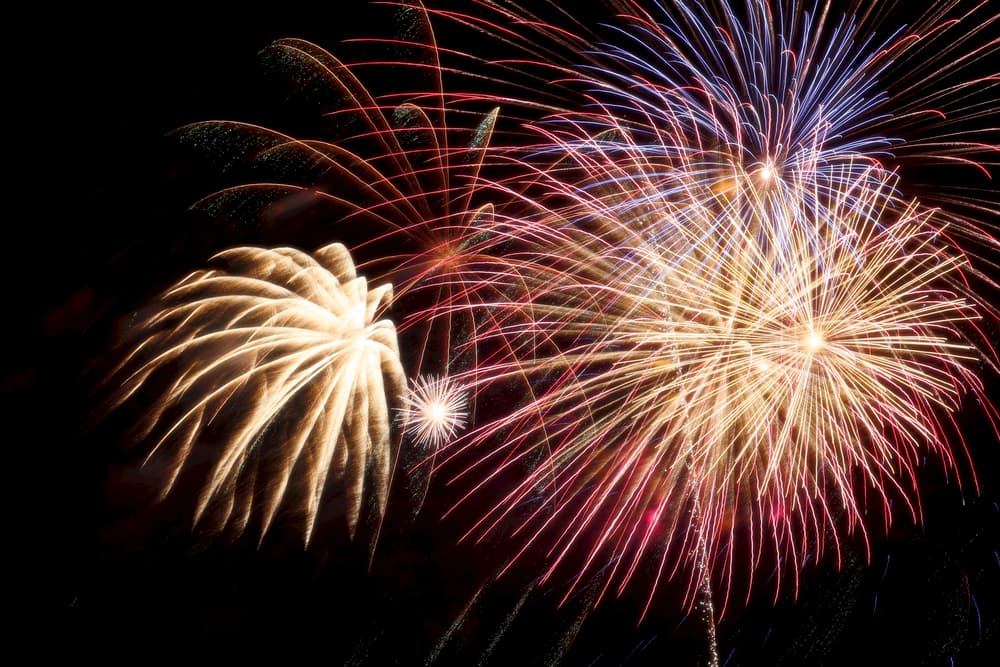 Fireworks are likely the most common loud noises that scare dogs. Why is this? Likely because fireworks are really loud and their sounds are random and unpredictable.

Gun shots are very loud to human ears, which is why hearing protection is recommended at a shooting range. For dogs, who hear things at higher intensity, gun shots are extremely bothersome. 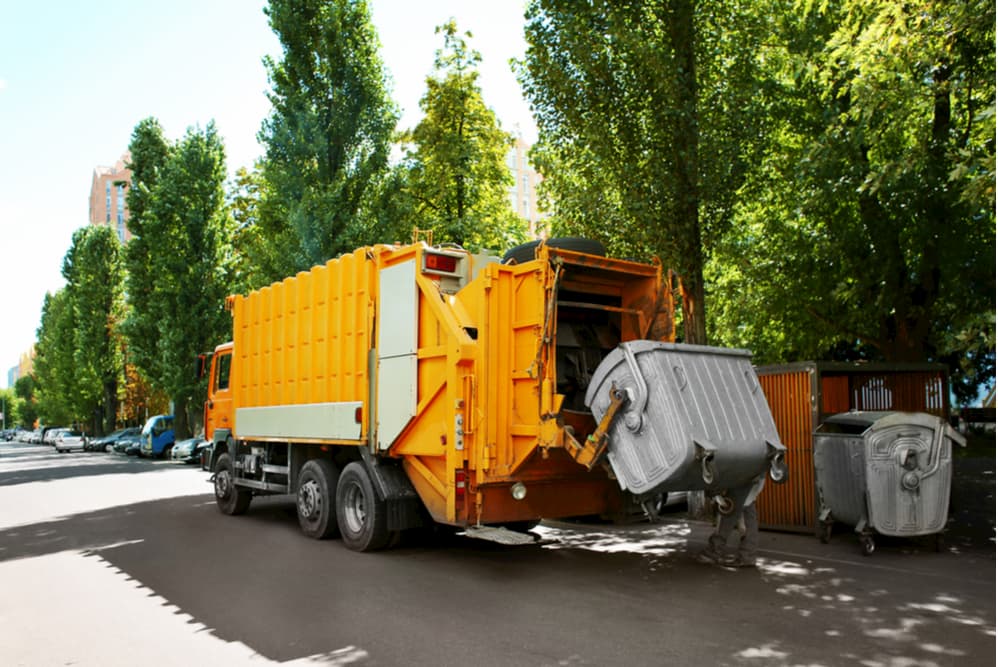 Dogs probably hate the sounds of these vehicles because they are loud but they also create a variety of high pitched noises such as beeping and screeching.

Some dogs cower when pet parents go to clean their carpets. Vacuum cleaners are really loud but they also move around your dog’s territory, likely adding to the fear they cause. 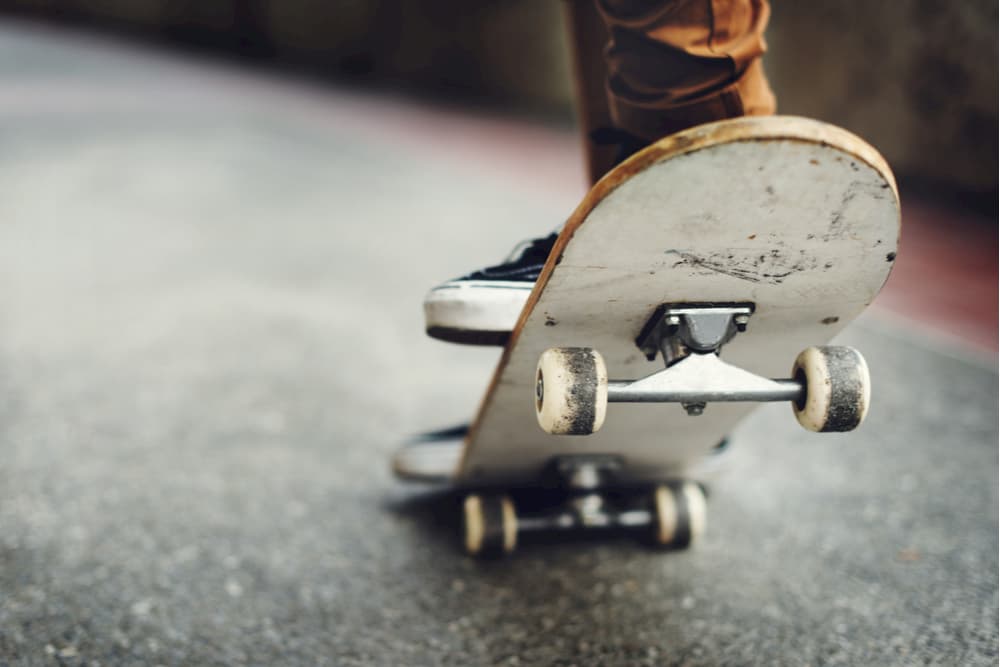 Skateboards can frighten dogs not only because they are loud but because they make erratic noises as they pass over bumps and as the skateboarder performs jumps and other tricks. A skateboard passing a dog may also initiate the dog’s chase instinct and cause the dog to run and bark after the skateboarder.

A wailing infant can sure produce loud and often high pitched noises that some dogs hate. 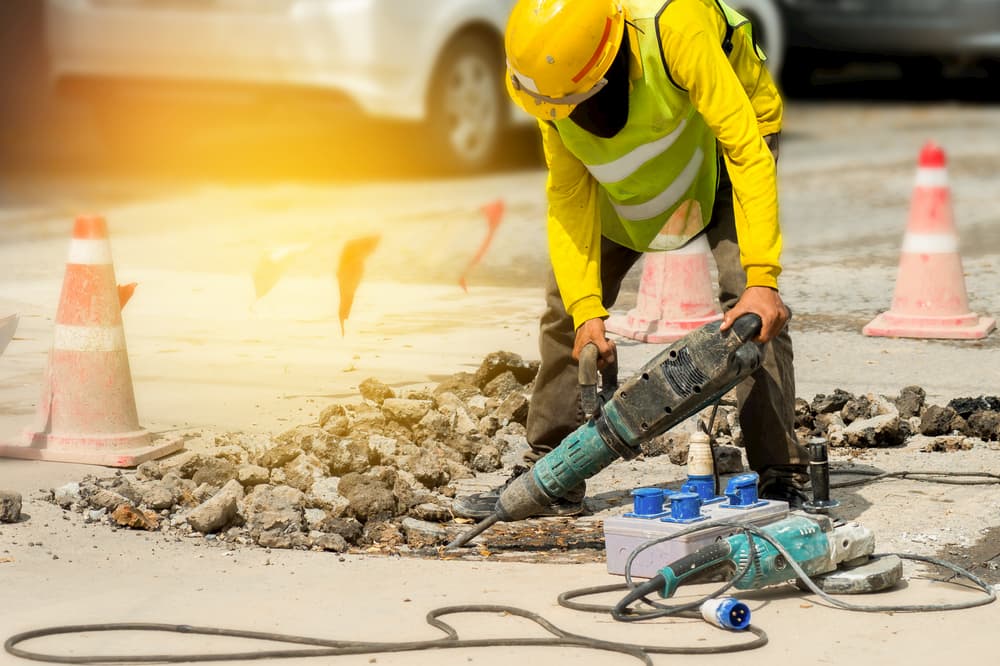 Car alarms are so loud that they often cause windows and door frames to rattle and may rattle your pup into a frenzy as well.

The loud and oscillating high pitched noises caused by sirens from fire trucks, ambulances, and police cars are frightening to many dogs. 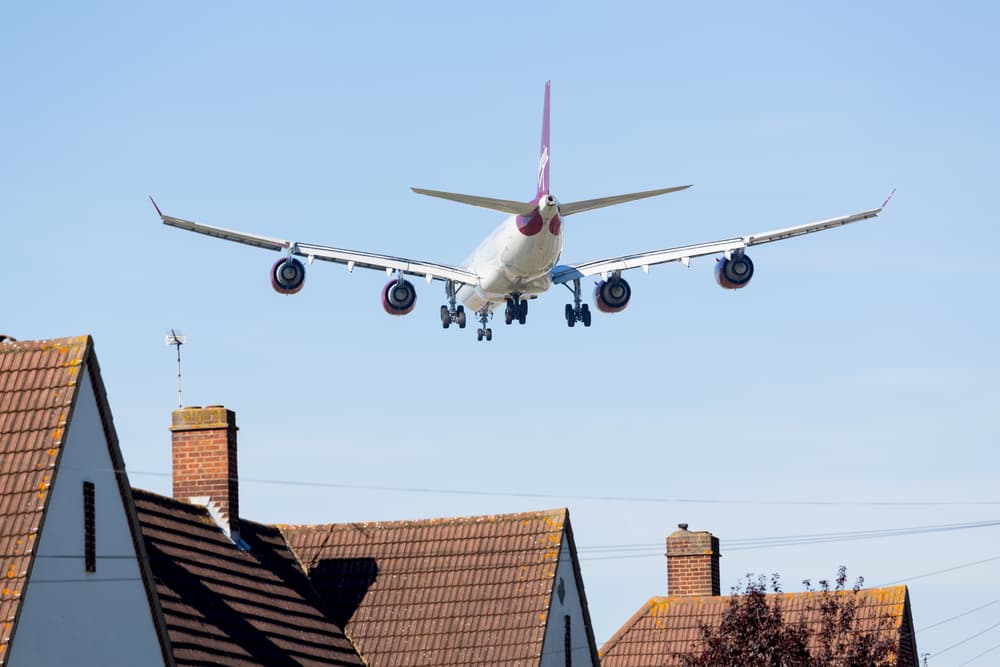 If you live close to an airport you may notice that your dog behaves fearfully every time a plane flies overhead. This may be especially true if your dog was in a rural area as a puppy and never conditioned to hearing this loud scary noise.

The sound of an air conditioner or furnace turning on can send some dogs jumping. This is likely due to the sudden nature of this sound, causing them to startle. 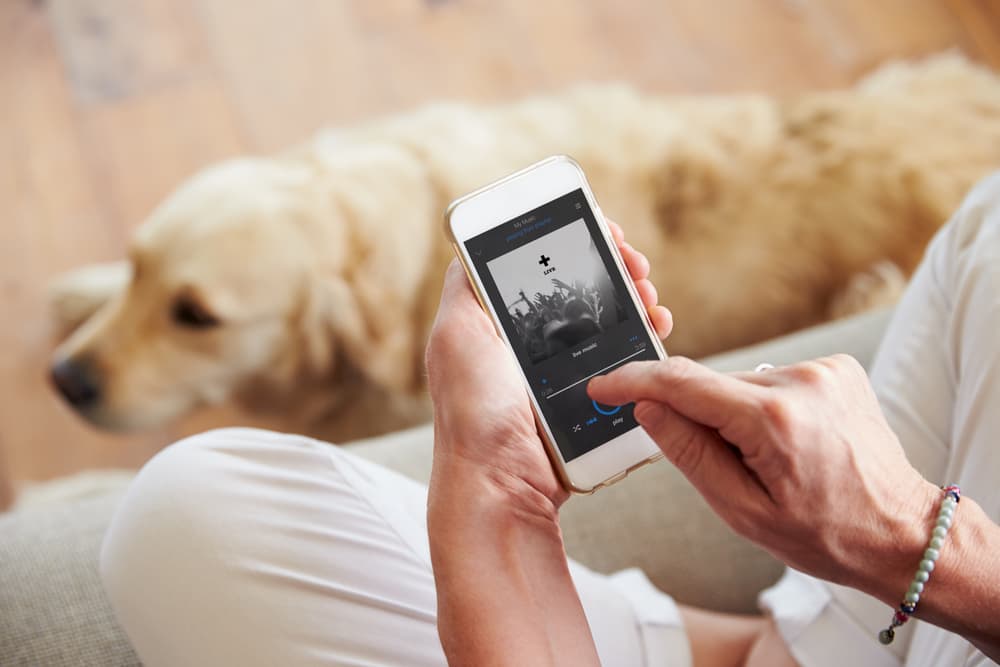 Certain noises may have the opposite effect on dogs and may help to calm or soothe them when scary noises are going on around them.

Classical music has been shown to ease anxiety symptoms in dogs in loud shelter environments (3). Playing a sound machine with the sounds of waterfalls or white noise can also help to drown out fireworks or thunder. Pet parents can also find CDs or playlists online that were specifically developed to produce calming effects in dogs.

In dogs showing symptoms of fear and anxiety, people speaking around them should speak in low and slow tones.

How To Help Your Dog Overcome Noise Phobias 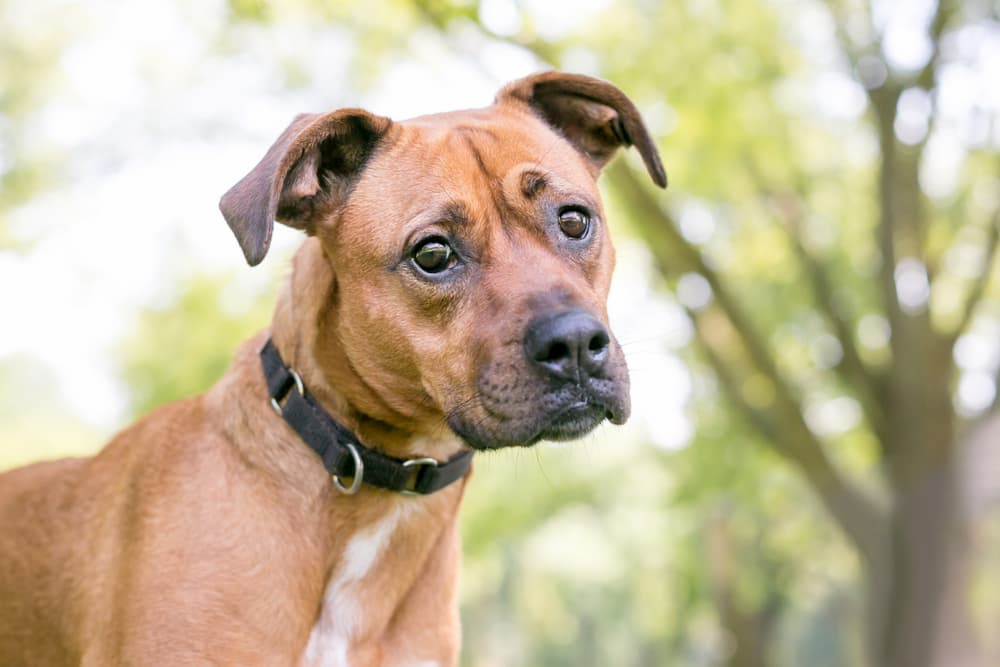 Besides playing calming sounds or turning on a sound machine or TV to mask offending noises, there are a few key things that you can try to help your dog with a noise phobia.

The most important thing to do is to recognize aversions to noises early on and address them right away. Fears intensify the more times that a dog hears that scary noise and eventually the fear can turn into a true phobia. Once a dog has a phobia to one noise, a phobia to other noises will likely occur if the issue is not addressed promptly.

Pet parents should try to avoid exposing their dog to the sounds that scare them as much as possible. This can be achieved by taking your dog to doggie daycare while you have a construction project going on at home or going to an area where fireworks are banned during the holidays.

However, avoidance will not always be an option, so you should also work on some training. You can try desensitizing your dog to the sounds he is fearful of by playing a recording of the sound, starting off with a very low volume and gradually increasing the intensity of the sound as tolerated by your dog. This must be done very carefully and using positive reinforcement such as a treat or toy to reward your dog when he is not responding to the sound. Doing too much too soon or ignoring your dog’s body language can make the fear worse.

Pet parents can also train their dogs to relax in a safe haven, such as a bathroom or closet with a comfy bed so that their pet has a quiet place to retreat to when they are scared.

Ignoring your dog when he is behaving fearfully and consistently rewarding him as soon as he calms down or starts playing with a toy is another effective training technique.

There are various products, such as noise cancelling headphones for dogs, compression garments, and calming pheromones that may be helpful in calming some dogs.

As always, it is best to have your dog examined by your veterinarian when any fearful behavior develops. Your vet will want to run lab work to make sure there isn’t an underlying health condition, such as hypothyroidism or Cushing’s disease that may be contributing to the abnormal behavior. Your veterinarian can also consult you on supplements or medications that may be useful in managing noise phobias.