Pay attention the next time your pet is approached by an unfamiliar person. Does he lick his lips?

Dogs lick for a wide variety of reasons, including communication, and licking is usually a normal behavior for them. Dogs love to explore with their mouths and tongues. However, if any licking behavior becomes persistent or excessive, it may be the sign of a medical or a behavioral disorder.

Why Do Dogs Lick So Much? 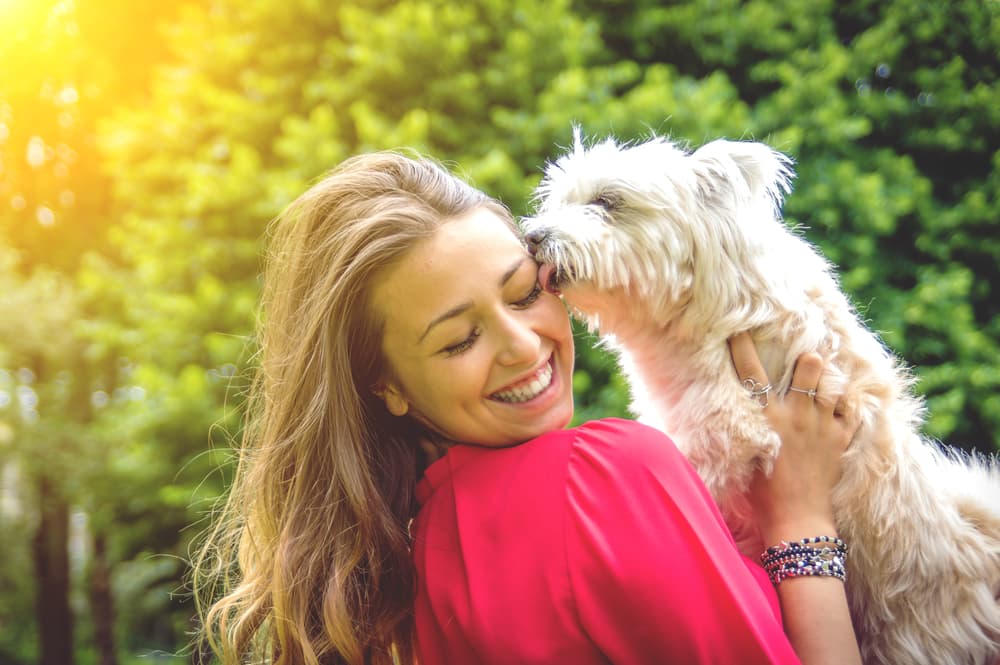 Dogs are first introduced to licking behavior by their mothers. As soon as puppies are born, their mothers must lick them to stimulate them to urinate and defecate, as well as to groom them. Dogs learn this behavior and will lick each other or their humans as part of normal social interactions. Licking can also be soothing to dogs.

Unlike humans, dogs do not have hands that they can use to touch, feel, and explore the world. Instead, dogs use their noses as well as their tongues to explore and learn more about their environments.

Dogs have an amazing sense of smell and if something smells good or pungent, including smells we find disgusting, it will often prompt a dog to lick that object. Your dog may lick your feet because they are stinky. Dogs may also lick things because they taste good to them, such as another dog’s mouth after they’ve recently eaten.

For some dogs, licking can be an attention-seeking behavior that we unknowingly reinforce. Dogs are very in tune with their owners. If you gave your puppy attention every time he gave you kisses because it was adorable (who can resist puppy breath?), he learned to continue this behavior into adulthood in order to receive attention.

But not all licking behavior is for attention or a normal part of exploration. A common reason that may cause a dog to excessively lick himself is allergies. Allergies cause a dog to feel itchy and he will excessively groom to try to alleviate the itch. Dogs may also lick their lips or objects obsessively if they are nervous, stressed, or bored. 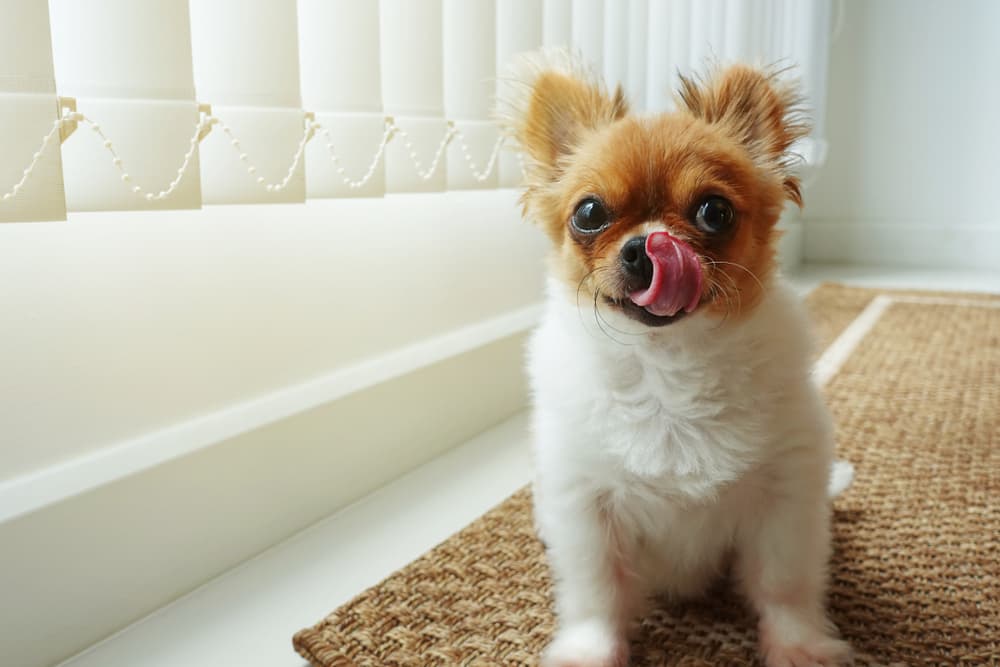 Besides licking their lips as part of normal communication and greeting others, dogs also lick their lips for the following reasons:

When dogs feel hungry or they smell something delicious, like hamburgers on the grill, they will lick their lips.

After finishing a meal—when there is still food in his mouth or on his lips—you might notice your dog licking his lips more than normal.

Dogs may also lick their lips when you pet them as a signal that they are nervous or stressed by the behavior. Other dog body language signs of fear, anxiety, and stress include avoiding direct eye contact, a tense body posture, crouching down, pinned ears and a tucked tail. If you see any of these body language signs in a dog, it’s best to stop the behavior, give him some space, avert your eyes, and let him come to you.

Ongoing anxiety can also lead to chronic behaviors such as lip licking. Anxiety behaviors can be reduced by giving your dog adequate exercise, providing him with interactive toys, ignoring anxious behaviors, and rewarding calm behaviors. Your veterinarian can help diagnose anxiety in your dog and may prescribe anxiety medications if the issue is severe.

Yes, dogs can develop OCD just like people can, and excessive lip licking can be a symptom. OCD behaviors will typically first occur at or around the age of adolescence. Dogs with OCD will not usually stop when asked to stop the behavior and will do it even when their owners are not around. If you are concerned that your dog has OCD he should be evaluated by a veterinarian, who may then refer him to a veterinary behaviorist, as this can be a difficult condition to treat.

Similarly to humans, when dogs feel nauseous they will start to produce excess saliva and this in turn will cause them to lick their lips. Other clues that can tell you nausea is the reason for lip licking are loss of appetite, eating grass, or vomiting. If these symptoms are severe or last longer than a day or so, you should take your dog to see his veterinarian.

Any disease that affects the gastrointestinal tract including inflammatory bowel disease, liver disease, food allergies, pancreatitis and intestinal cancers can cause a dog to lick his lips.

Dog lip licking may be due to an issue inside of the mouth. Periodontal disease, an inflammatory condition of the gums and the tissues supporting the teeth, is present in some form in most adult dogs. As dogs age, if they do not receive regular oral care, this disease may progress and lead to pain, infection, and tooth loss. This will often lead to lip licking when the disease is advanced.

Tumors in the mouth and foreign objects stuck in the mouth may also lead to lip licking. If you notice lip licking suddenly in your dog, make sure you take a good look in his mouth and take him to the vet if the behavior continues and is frequent.

Partial or focal seizures in dogs are seizures that only affect a portion of the brain and may only cause subtle symptoms such as lip licking. If your dog suddenly develops lip licking, especially if your dog acts strange before and/or after the behavior begins, this may be a symptom of seizures and your dog should be taken to see a vet as soon as possible.

Canine Cognitive Dysfunction Syndrome (CDS) is a disorder similar to dementia in humans and may cause a dog to lick its lips. It occurs in old and geriatric dogs and is a diagnosis of exclusion, meaning your veterinarian will diagnose this condition only when other causes of lip licking are excluded. Other symptoms of CDS include house soiling, change in sleep-wake cycles, pacing, vocalization and confusion.

Why Do Dogs Smack Their Lips?

If a dog were to have severe mouth pain or something else really disturbing happening, the response may be more exaggerated and lead to lip smacking instead of lip licking. 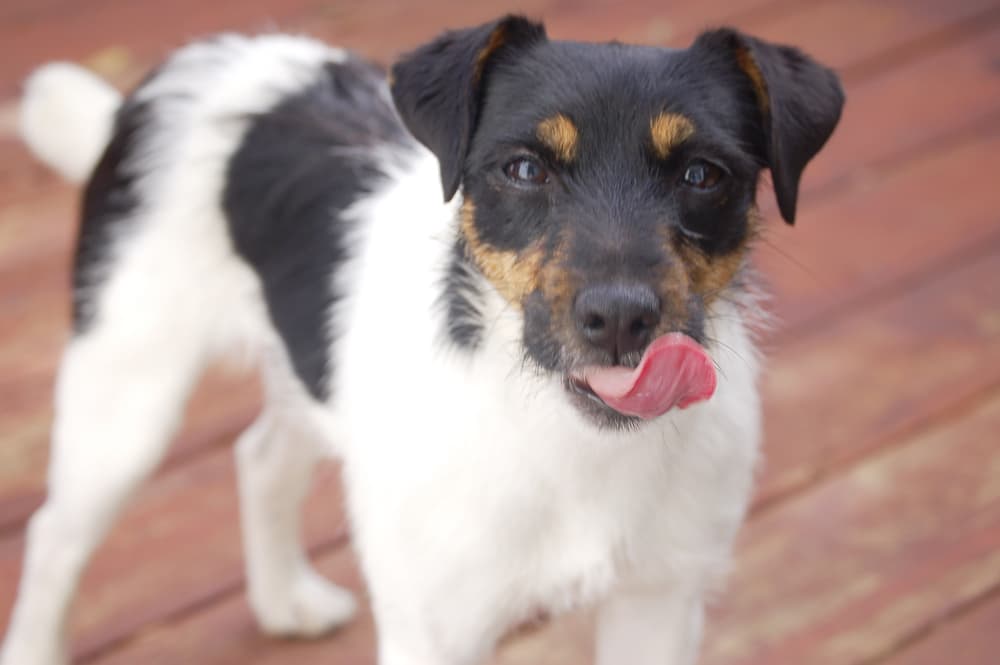 Occasional lip licking can be normal dog behavior. But a dog’s licking is considered excessive if it interrupts you or your dog’s day-to-day routine or quality of life.

If your dog licks his lips without stopping for longer than a minute at a time, this would be considered excessive. If the lick lipping wakes you or him up in the middle of the night, the behavior is excessive.

You should not scold or punish your dog when he licks his lips. Punishment can increase anxiety and it gives the dog attention, so it can inadvertently reinforce the behavior.

If the behavior occurs despite trying the above suggestions, it’s time to take your pup to his veterinarian.

When To Be Concerned About Dog Lip Licking

Excessive lip licking often has a medical cause. You should take your dog to the vet if excessive lip licking occurs suddenly and there is no apparent cause for the behavior. This is especially important if your pet is older or you notice any other abnormal symptoms such as a change in appetite, drooling, vomiting, diarrhea, or weight loss.

Before taking your dog to see a veterinarian, it is very helpful to take several videos recording the abnormal behavior. This can help your veterinarian tremendously in reaching a diagnosis.

During a veterinary appointment, the doctor will do a thorough neurological examination, and blood, urine, and fecal tests should be performed. If the tests do not show any abnormalities, the problem is likely due to a behavioral disorder and your veterinarian may recommend working with a behaviorist or trainer.