You may have come across natural pet products containing tea tree oil while shopping for your dogs. This healing oil, known for its antiseptic, antifungal, and antibacterial properties is included in modern skincare regimens for humans and has made its way into pet products.

However, in its purest form, tea tree oil is dangerous to dogs and attention should be given when buying goods containing the essential oil. Keep in mind that when ingested, tea tree oil is bad for both dogs and humans.

Read on to find out if and when to use tea tree oil for dogs, and what to do in the event of poisoning.

What Is Tea Tree Oil? 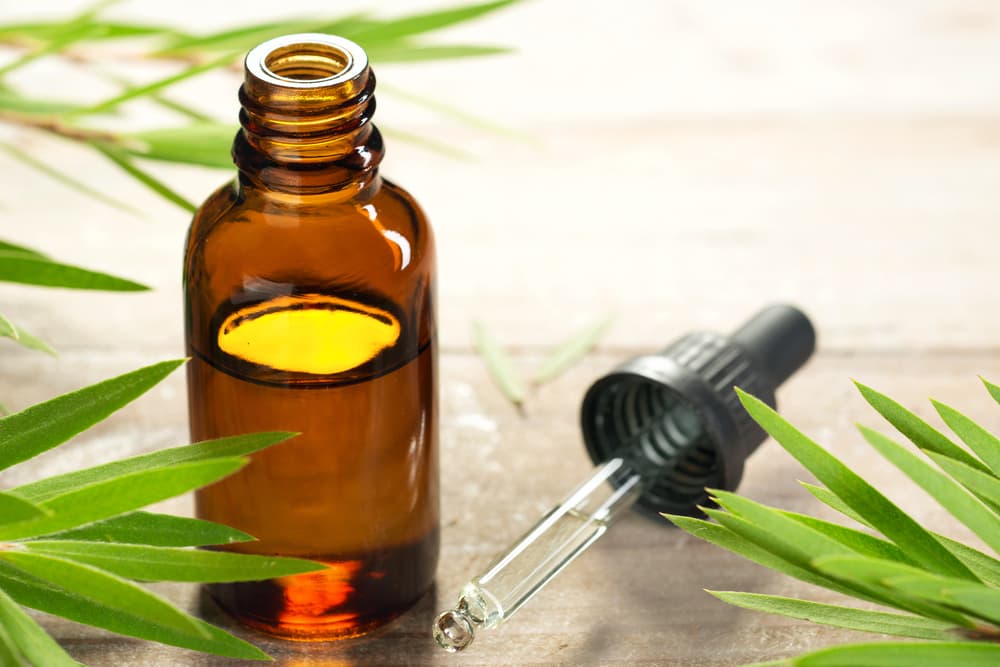 Tea tree oil, also known as melaleuca oil, is an essential oil extracted from the leaves of Melaleuca alternifolia, a small tree found in Queensland and New South Wales, Australia. For centuries, indigenous people have used the oil in traditional medicine to treat coughs, colds, and skin conditions.

In aboriginal bush medicine, tea tree leaves are brewed in a tea to treat common ailments like colds and coughs, and the paste is applied directly to wounds. This natural remedy contains the terpinen-4-ol compound, which is known to fight certain fungi, bacteria, and viruses, as well as boost the immune system by increasing white blood cell activity. 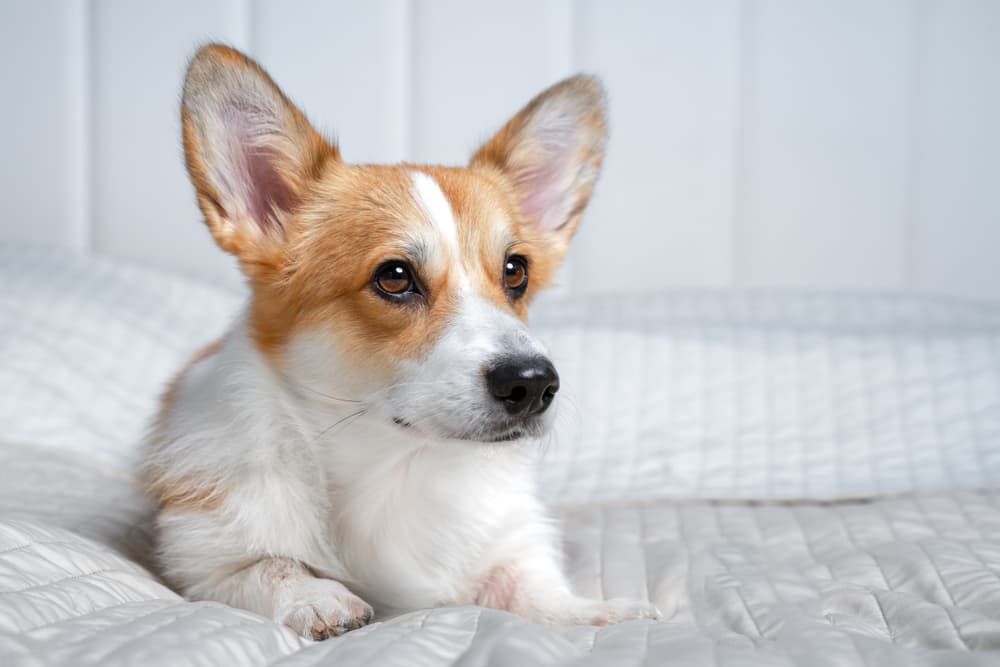 The popularity of tea tree oil means many households have the essential oil in some form or another. It can be found in human products ranging from haircare to acne treatments. The oil is often diluted and used to treat razor burns, nail fungus, and to repel insects, among other applications. It’s also diffused to purify and freshen the air with its refreshing scent.

But tea tree oil—especially if it’s undiluted and in its purest form—is toxic to dogs. According to Pet Poison Hotline, “as little as 7 drops of 100 percent oil has resulted in severe poisoning, and applications of 10-20 ml of 100 percent oil have resulted in poisoning and death in both dogs and cats.” The terpenoids in the oil that effectively fight against bacteria and fungi are also easily absorbed into the body quickly and are toxic to pets.

“Pure essential oils, either applied topically or ingested, are the most dangerous form,” states Dr. Jamie Richardson, medical chief of staff at Small Door Veterinary. Richardson states that topical use of the oil can be dangerous, as “many pets will try to groom them off, as they do not enjoy the potent smell, causing accidental ingestion.” 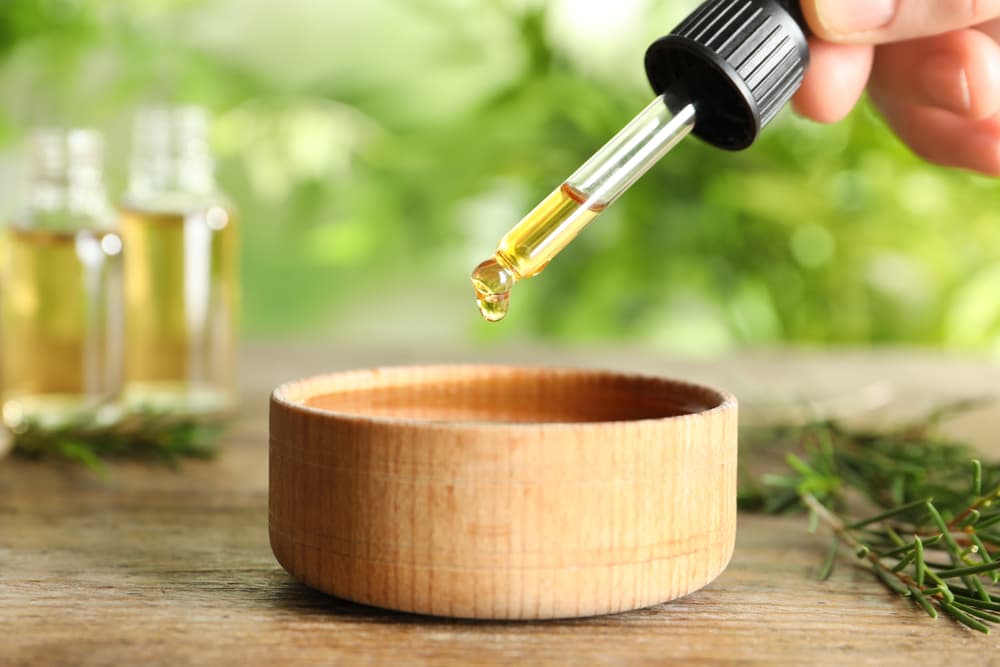 Dr. Jessica Herman of Fuzzy Pet Health, which offers telehealth services, states that tea tree oil is easily absorbed through the dog’s skin and gastrointestinal tract, making the use of any topical, oral, and diffuser formulations highly toxic.

Symptoms can appear within hours of exposure, but there are no antidotes for tea tree oil toxicity. Canine patients, instead, are treated symptomatically. Herman says treatment may include, “skin decontamination, induced vomiting, intravenous fluids, and medications that help to protect the liver.” Pet parents can expect hospital stays of two to three days if their dogs suffer from tea tree oil toxicity.

If tea tree oil is accidentally applied to your dog, Richardson recommends decontamination by washing it off. As for products, she states, “Shampoos or other products that contain tea tree oil in concentrations less than 1-2 percent are generally not considered toxic and are unlikely to cause harm.”

Are There Benefits of Tea Tree Oil for Dogs? 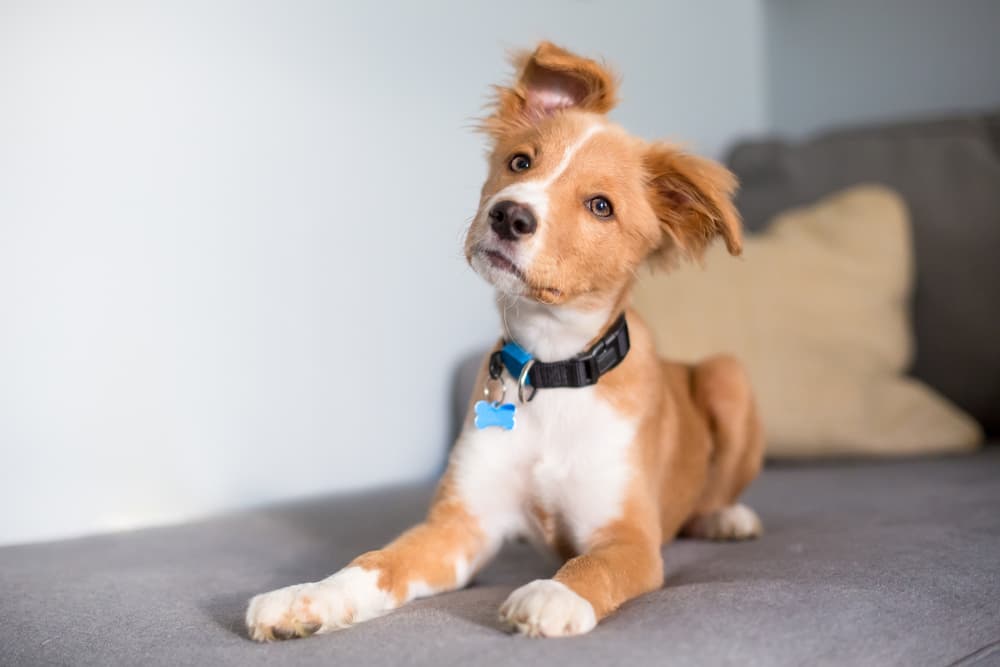 A concentration of less than 1-2 percent of tea tree oil in pet products is considered non-toxic. However, tea tree oil in such small quantities may not be beneficial either.

Both Herman and Richardson indicate that there have been no studies showing the effectiveness of tea tree oil for dogs.

“While there are claims that tea tree oil can help with skin issues, ear infections, and flea prevention, they have not been studied or proven to be effective,” says Herman.

Herman further states that tea tree oil is neither regulated nor does it require any safety regulations like prescription products. “The consumer never has a full understanding of the concentration and ingredient list within a tea tree oil product,” she says. “There are also natural variations in strength among the different types of tea tree oil, which makes it challenging to create a uniform product.”

“Since tea tree oils have not been proven to be more effective than other more traditional medications, but pose more potential risk, particularly for animals, I would not recommend its use,” says Richardson. 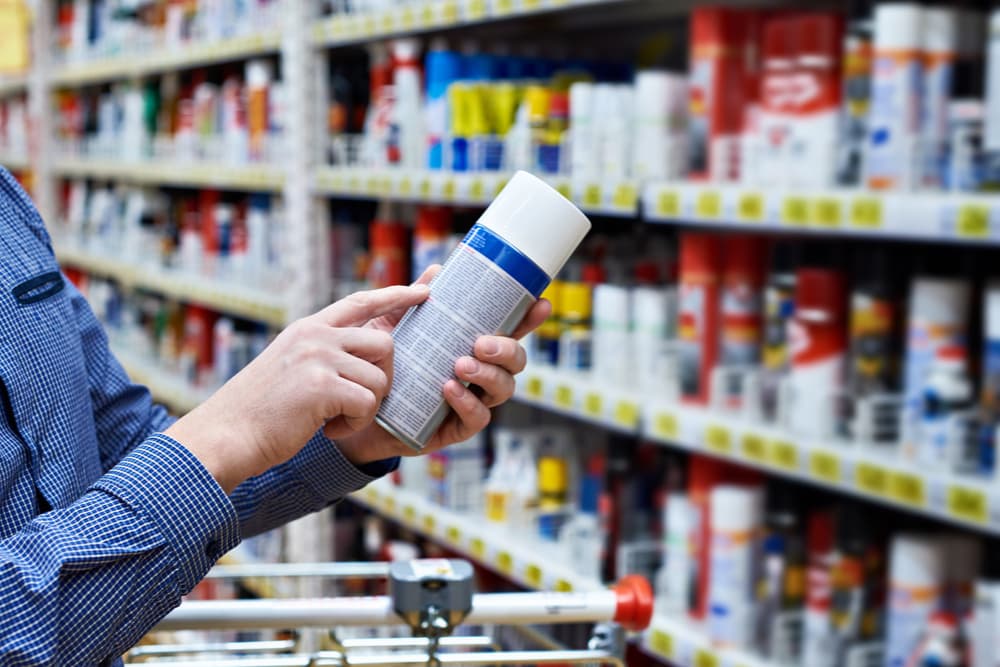 Tea tree oil is commonly found in natural pet shampoos, creams, ear wash, grooming wipes, and topical flea treatments, among others. Sprays and spritzes with tea tree oil are advertised as treating skin problems and providing itch and hot spot relief. Some of these treatments are sold in combination with aloe or eucalyptus oil for added benefits.

When purchasing tea tree oil products for your pet, check the label to ensure that the concentration of the oil is less than 2 percent. Conduct a patch test to see if your pet is allergic, and only use on dogs over six weeks old. When applying shampoos with a thick consistency, wash off the product completely; otherwise, there’s a risk of your pooch ingesting the oil residue while grooming himself.

Can Tea Tree Oil Be Used for Fleas on Dogs? 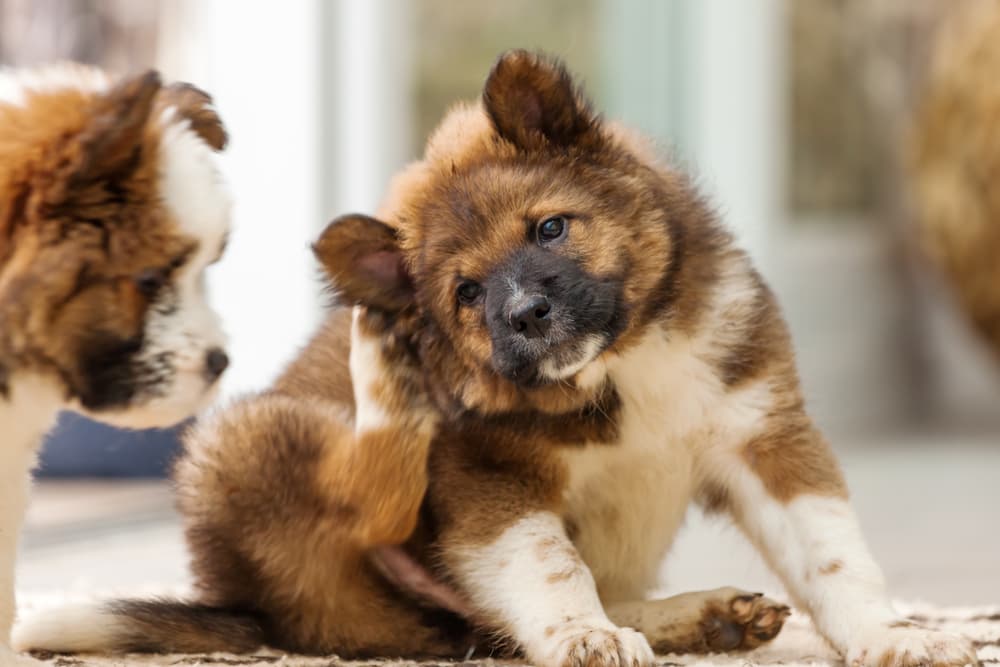 Fleas are pesky little parasites moving through your dog’s coat, causing irritation and sometimes hair loss. When used safely, tea tree oil has the ability to repel fleas, however, home remedies including the essential oil are not advisable.

Richardson advises against the use of tea tree oil for fleas on dogs. “There is no evidence to suggest that this is an effective treatment for the control of fleas, as it does not kill either the adult fleas or the eggs.”

You are likely to find flea collars, topical treatments, and chewables more successful in treating fleas. Additionally, commercial flea treatments contain chemicals that can stop the development of eggs. 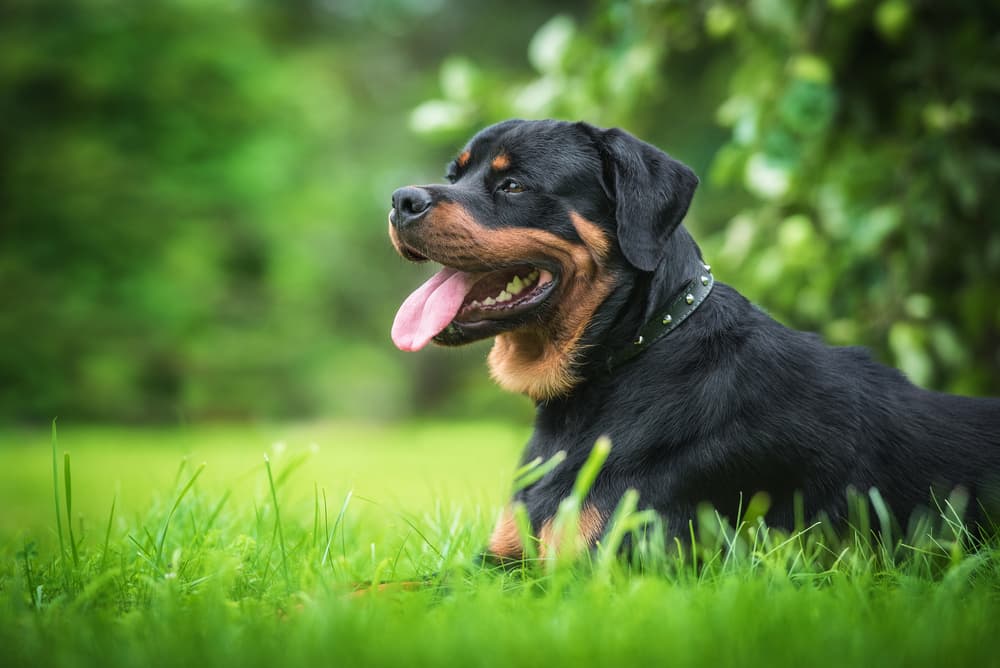 Richardson suggests pet parents avoid tea tree oil products “due to the variability in concentration, formulation, and quality of these products.” More importantly, the concentrations needed to treat skin problems are far greater than what is considered non-toxic for pets.

There is also a real risk of miscalculating and using more than is deemed safe when concocting home remedies. Although creams and shampoos containing tea tree oil may seem like a good alternative to synthetic treatments, the risks may outweigh any potential benefits.