Rabies is a viral disease present throughout the world. The virus is capable of infecting many different kinds of mammals—including dogs and cats—and it is a zoonotic disease, meaning it can spread from animals to humans.

Once a susceptible animal, including humans, becomes symptomatic for rabies it is almost always fatal. According to the World Health Organization (WHO), rabies kills more than 59,000 people worldwide every year, with most cases occurring in Africa and Asia (1).

Dog bites account for 99 percent of rabies infections in humans. In the United States, however, there are only between 1 to 3 human rabies cases annually. This low rate is mainly due to the widespread vaccination of dogs and cats in the country.

What is the Rabies Vaccine?

The rabies vaccine traces its origins to 1885, when Louis Pasteur, also known as the “father of microbiology,” injected an inactivated rabies virus into a young boy who had been bitten by a rabid dog. The vaccine prevented the boy from developing rabies symptoms and saved him from death (2).

In the 1980s, the United States and many other countries began vaccinating dogs against rabies to protect humans against this deadly virus. Unlike in humans, to whom most rabies vaccinations are given after a potential exposure, rabies vaccines are given to healthy dogs in order to prevent rabies.

How Does It Work? 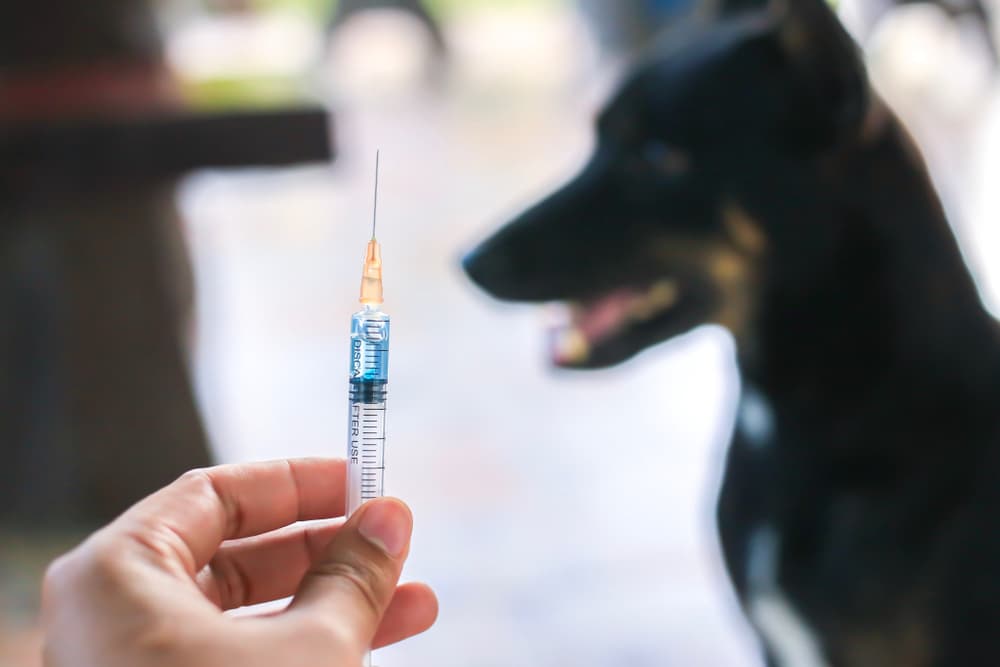 Rabies vaccines contain inactivated pieces of the rabies virus, meaning the vaccine will not cause a dog to develop rabies. Once injected into the dog, the immune system reacts to the foreign rabies virus material by developing antibodies against the virus.

The antibodies will continue to circulate for a period of time and allow the body to “remember” how to fight off future infections. If a vaccinated dog is exposed to rabies, the immune system will contain the necessary antibodies to fight off the infection before it can cause the dog to become ill.

After a certain amount of time, the body may lose sufficient levels of the antibodies that help the body to battle a rabies infection. This is why it is necessary to re-vaccinate dogs against rabies every 1 to 3 years, depending on their age and the type of vaccine used.

Since rabies is such a deadly disease, if a vaccinated dog is exposed to a potentially rabid animal via a bite, scratch or exposure to nervous system tissue, it is usually recommended for the dog to receive an additional vaccination against rabies.

Puppies can be vaccinated against rabies when they are as young as 12 weeks of age. Most states in the U.S. require that puppies receive their rabies vaccine by 4 to 6 months of age, depending on state or local laws.

The next rabies vaccine must then be administered one year later. After the one-year booster vaccine, the rabies vaccine is typically boostered every 3 years but this can vary based on the vaccine manufacturer and state or local laws.

Rabies Vaccine Side Effects for Dogs

While the rabies vaccine can cause side effects, most are mild and resolve within a day or so. Normal side effects from a rabies shot include tiredness and soreness at the site of injection.

For dogs with a history of vaccine reactions, a veterinarian may recommend administering medications prior to future vaccines to prevent reactions.

Some states or municipalities requiring rabies vaccinations may allow dog owners to request a rabies vaccination exemption if the dog’s veterinarian determines continuing to vaccinate poses a significant risk to the pet’s health.

Based on current evidence, there is no difference in the risk of side effects from one licensed vaccine to another (3).

Manufacturers of the Rabies Vaccine for Dogs 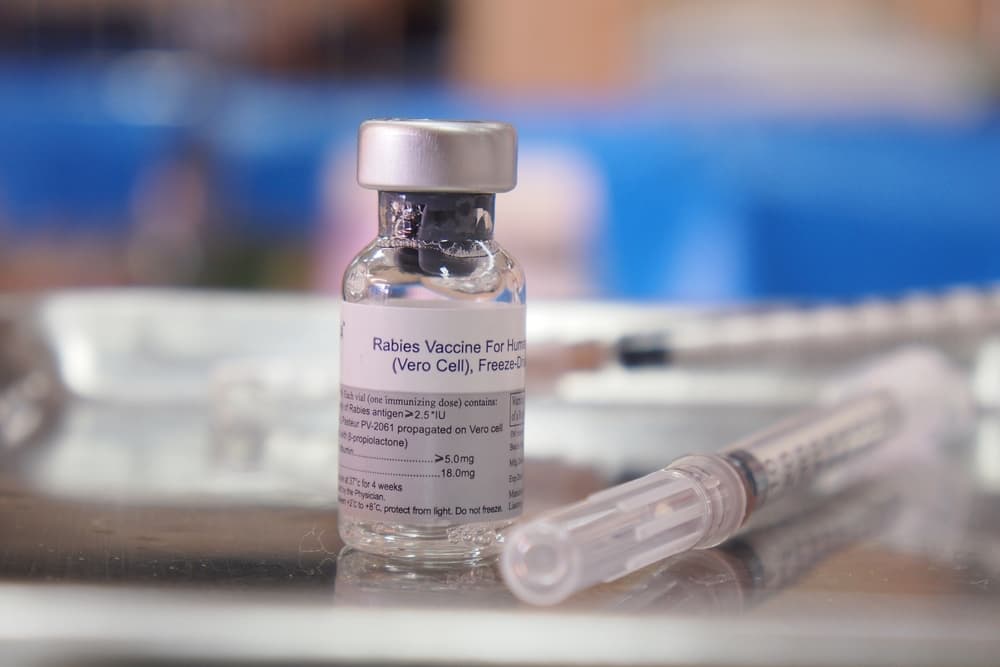 The following rabies vaccines are licensed for use in dogs in the United States:

Cost of the Rabies Vaccine for Dogs

While the price varies based on your geographical region and the type of veterinary clinic where the vaccine is given, pet parents can generally expect to pay between $15 and $35 for a dog rabies vaccine.

Does Your Dog Need to Be Vaccinated for Rabies?

It is very important to vaccinate dogs against rabies. It is the law for dogs to receive the rabies vaccine every 1 to 3 years in most areas of the United States and you can be fined for not vaccinating your dog. Additionally, keeping your dog’s rabies vaccine up to date will help to ensure that she does not contract the fatal disease and risk spreading rabies to yourself or others.

In the U.S., wildlife are reservoirs of the rabies virus. The animals most commonly infected with rabies are bats, coyotes, skunks, foxes and racoons. If an unvaccinated dog is bitten or scratched by a rabid animal, it may develop rabies, which can then be transmitted to a human.

If your dog is bitten by a suspected rabid animal and she is not up to date on her rabies vaccine, law enforcement has the right to quarantine your dog for four to six months, or worse yet, to euthanize your dog. Euthanasia and then testing of the brain tissue is the only way to tell for sure if an animal is infected with rabies. Quarantines are also mandated when an unvaccinated dog bites a human. All animal bites should be reported immediately to a local animal control agency for guidance on the appropriate protocol.

Vaccinating your dog against rabies is crucial to maintaining public safety and is part of being a responsible pet owner.