Finding a tick on your dog can be an upsetting experience. Not only are ticks disgusting to look at, but they can also transmit diseases. While many of us worry about Lyme disease, the truth is that ticks can transmit a number of other infections, including a bacterial infection called anaplasmosis.

According to the Companion Animal Parasite Council, approximately 3 percent of dogs within the United States tested positive for anaplasmosis exposure in 2019 (1).

Anaplasmosis is caused by two different bacteria: Anaplasma phagocytophilum and Anaplasma platys. These two bacteria are very closely related, but they cause slightly different clinical signs in dogs.

Anaplasmosis is a bacterial infection that is spread by ticks. There are two forms of anaplasmosis, which are caused by different bacteria and have different characteristics.

Anaplasma phagocytophilum causes the more common form of anaplasmosis, known as dog tick fever. This infection occurs worldwide. In the United States, cases are most commonly reported in the Northeast and Midwest. A. phagocytophilum is spread by deer ticks, Western black-legged ticks, and castor bean ticks.

Anaplasma platys is a less common form of anaplasmosis, known as infectious cyclic thrombocytopenia (thrombocytopenia means “lack of platelets”). This infection is also found worldwide. It is spread by the brown dog tick.

Most dogs that are bit by an infected tick do not develop any clinical signs of anaplasmosis. If symptoms do occur, they typically begin one to three weeks after the bite of an infected tick. Although signs of illness are uncommon, the illness can be severe.

What Causes Anaplasmosis in Dogs?

Anaplasmosis is spread by the bite of an infected tick. The tick must feed on the dog for at least 24 hours in order for the infection to spread. During feeding, bacteria move from the tick’s gut to the mouth, and are then injected into the dog’s blood and tissues.

While any dog can be infected with anaplasmosis, it appears to be more common in Labrador Retrievers and Golden Retrievers. We don’t know whether this actually represents an increased susceptibility or whether these dogs are just more likely to spend time in the woods with their owners. 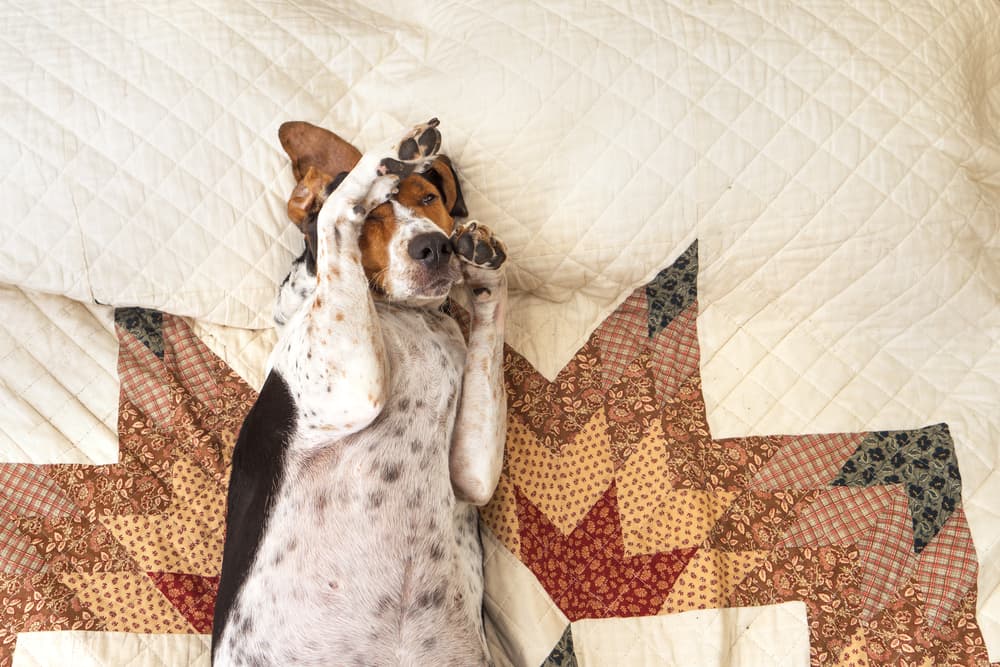 Asymptomatic anaplasmosis in dogs is common, meaning dogs may not show symptoms of the disease.

Many dogs exposed to Anaplasma phagocytophilum remain completely healthy, with no signs of disease. When clinical signs do occur, however, they are typically seen one to two weeks after exposure. These dogs develop a flu-like illness, which is sometimes referred to as dog tick fever or dog fever.

After the initial illness, flu-like signs often resolve without treatment. However, if the infection progresses, signs of joint inflammation typically develop throughout the body. Affected dogs often limp and visible swelling of the joints may be seen.

Signs associated with A. phagocytophilum infection include:

Dogs infected with A. platys develop a different set of symptoms, although there are some similarities. This bacterium attacks the platelets, which are cells within the blood that are responsible for blood clotting. Therefore, infected dogs often have problems related to abnormal bleeding.

Undiagnosed anaplasmosis in dogs can lead to significant bleeding disorders, which may begin to develop as soon as one to two weeks after infection. Additionally, A. platys can cause chronic anaplasmosis in dogs, with signs waxing and waning over time.

Signs of A. platys infection include: 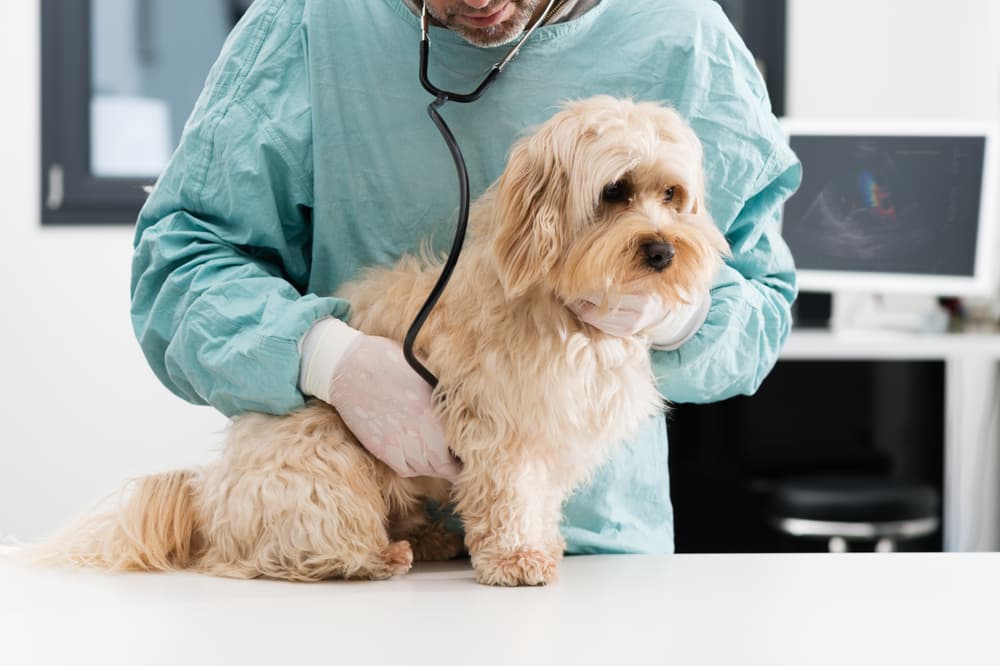 To diagnose anaplasmosis in dogs, your veterinarian will first perform a thorough physical exam and obtain a complete medical history.

Next, your veterinarian is likely to recommend blood tests, including a complete blood cell count (CBC) and serum biochemistry. A dog with anaplasmosis often will have a low platelet count on the CBC, as well as anemia (decreased number of red blood cells) and changes in white blood cells. A serum biochemistry profile may show increases in liver enzymes and proteins associated with inflammation. In some cases, the organism can be seen in the blood with the use of a microscope.

If physical exam and bloodwork findings suggest the possibility of a tick-borne disease, your veterinarian will perform additional tests. Anaplasmosis is usually diagnosed using an in-house test. This test requires only a few drops of blood and provides accurate results within 10 minutes.

One important limitation of the test, however, is that it does not distinguish between active infection and previous exposure. A positive anaplasmosis test can be seen in any dog that has been exposed to the disease, because the test looks for the presence of antibodies and not the bacterium itself. Dogs that test positive for anaplasmosis only need treatment if they have clinical signs or bloodwork changes that suggest an active infection.

How to Treat Anaplasmosis in Dogs 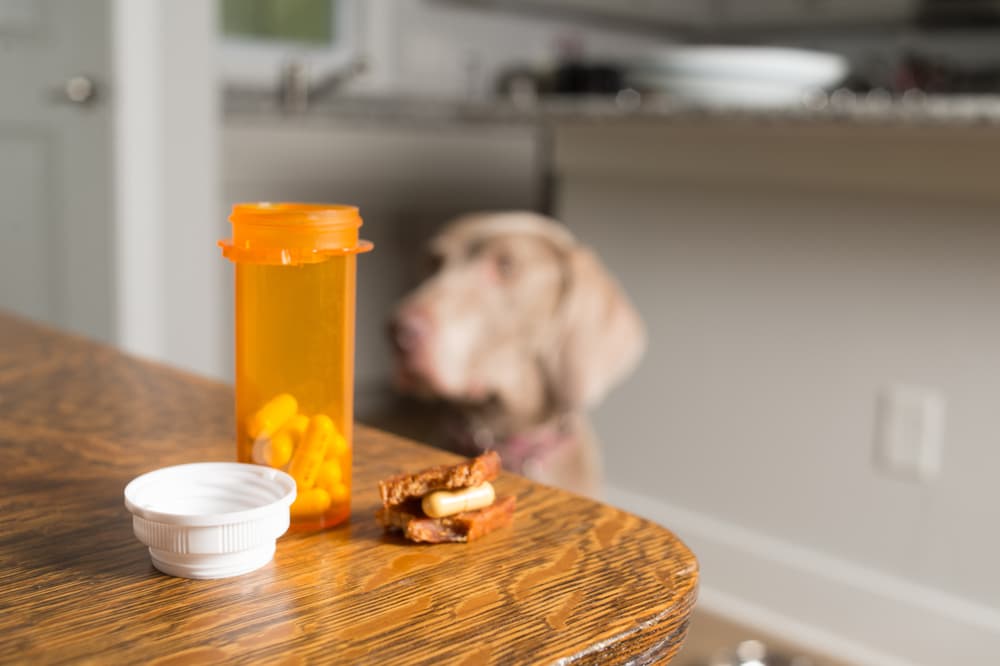 As a bacterial infection, anaplasmosis treatment involves antibiotics. Dogs typically begin to show signs of improvement within 24-48 hours of starting antibiotics. Antibiotic treatment is typically continued for one month, in order to maximize the likelihood of eliminating the infection.

In dogs that are severely ill, more aggressive care may be needed. If your dog is dehydrated, your veterinarian may recommend intravenous fluids. Severe discomfort may need to be managed with pain medications. Dogs with very low platelet levels should be confined (to limit the risk of injury that could result in bleeding) and may need blood transfusions.

Doxycycline is the antibiotic that is typically used to treat anaplasmosis in dogs. Most dogs tolerate this medication well. Like any oral medication, however, this drug may cause vomiting and/or diarrhea in some pets. Gastrointestinal side effects can be minimized by giving the medication with food. If doxycycline is unavailable, minocycline or tetracycline may be substituted; these drugs have similar actions and side effects.

Non-steroidal anti-inflammatory medications may also be prescribed to treat joint pain and swelling. These drugs should also be given with a meal, in order to minimize gastrointestinal effects.

All medications should be used according to your veterinarian’s instructions.

General Cost of Treatment for Anaplasmosis

The cost of treatment for anaplasmosis in dogs varies, depending primarily on the size of your pet. Larger dogs need larger medication doses. In general, treatment costs associated with anaplasmosis include:

In severe cases, hospitalization and blood transfusions may increase the cost of treatment to several thousand dollars.

How to Prevent Anaplasmosis in Dogs

The best way to prevent anaplasmosis is to ensure that your pet receives year-round flea and tick prevention. It takes 24 hours of feeding for an infected tick to transmit anaplasmosis—so any effective tick prevention (even oral formulations, which require the tick to bite in order to die) will prevent the transmission of anaplasmosis. Talk to your veterinarian to determine the best prevention for your dog.

If you do find a tick on your dog, remove it promptly. Use tweezers to grasp the tick’s head, as close to the skin as possible, then pull gently. The goal is to remove the entire tick, including the head. If the head is left behind, however, there’s no need to panic—your dog’s body will gradually expel the tick head within a few days.

If you spend a lot of time outdoors with your dog, make sure to regularly check your dog for ticks before entering your home.