It’s a fact of life: Dogs sleep a lot. And whether you’ve got a puppy that topples over after playtime or a good ol’ boy who snoozes the day away, you’ve likely spent plenty of time fawning over the adorableness that is a sleeping dog.

But if your dog sleeps all day long, you might start to wonder, Why do dogs sleep so much? And how much sleep do dogs actually need?

Read on to learn everything you need to know about why dogs sleep so much and when you should worry about your particularly drowsy dog, with expert insight from veterinarians.

While you likely take far fewer naps than your dog, the pattern of a dog’s sleep cycle is actually very similar to ours, says Dr. Jerry Klein, chief veterinary officer of the American Kennel Club (AKC). Like us, dogs get the majority of their deep, restorative sleep from 9:00 p.m. to 6:00 a.m. In a full sleep cycle, our bodies and minds downshift from wakefulness to drowsiness, light sleep (or non-REM sleep), followed by a final phase known as REM sleep (or rapid eye movement sleep), the deep sleep during which our eyelids flicker and we dream (1).

The main difference between our sleeping habits and our dog’s sleeping habits is pretty noticeable: Dogs tend to sleep in short bursts throughout the day while our average sleep cycle clocks in at about seven to nine hours at night with a slow roll into REM sleep.

But research shows that dogs can flick in and out of deep sleep within just 20 minutes. Your pup is also more likely to abruptly wake up after a period of deep sleep while you’re still fumbling around in that blurry, confused state known as “sleep inertia.” Scientists hypothesize this may happen because your pup’s ancestors were highly alert to their surroundings and often needed to wake up quickly (2).

If you’ve ever watched your dog sleeping and wondered if they actually dream, the cuteness is real: Those flickering eyelids and twitchy legs are an indication that your dog is deep in REM sleep, and studies show their brain waves look just like ours when we’re dreaming (3).

How Many Hours a Day Do Dogs Sleep? 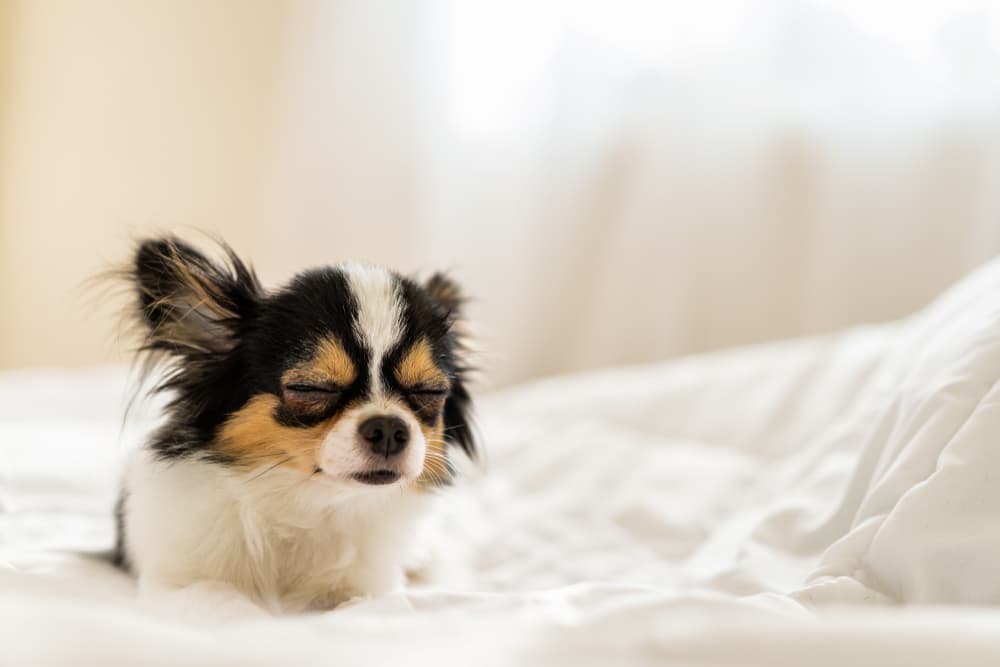 However, just how much sleep your dog needs can vary based on their age, size, and breed, says Dr. Rachel Barrack, a veterinarian and owner of Animal Acupuncture based in New York City.

For instance, if your elderly dog is slowing down, you’ve likely wondered, Why do old dogs sleep so much? Older dogs are tired out faster from day-to-day living simply due to the natural aging process.

While the specifics have yet to be studied, large-breed dogs may also sleep more compared to smaller-breed dogs and working-breed dogs, which tend to be more alert and energetic, says Barrack.

How Much Do Puppies Sleep? 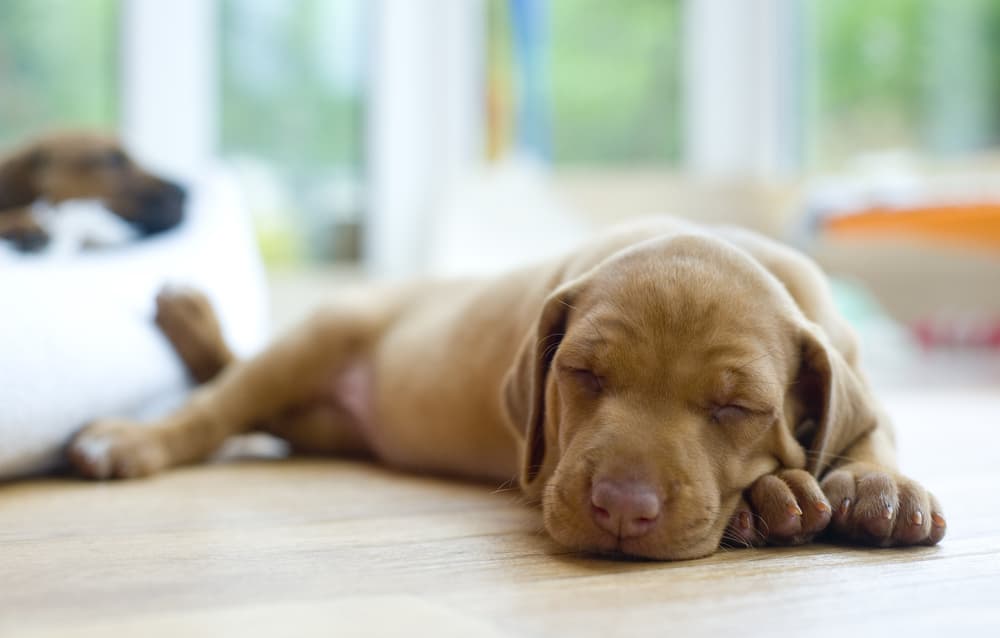 While very young puppies spend much of their waking hours learning and exploring, like babies and children they tucker out fast and need about 18 to 20 hours of sleep a day, says Klein.

Much like our little ones, puppies sleep a lot because they are physically and mentally growing at such a rapid pace, explains Dr. Kristi Flynn, an assistant professor in the department of veterinary clinical services at the University of Minnesota in St. Paul, Minnesota.

Tempted to hold your puppy to a strict “sleep schedule” in the hopes that they won’t have an accident at night? It’s normal for young puppies to need to go out at odd hours until they’re older and able to physically hold their bladder for longer, says Klein. As such, it’s fine to establish a morning and evening routine with your dog to work on house training, but don’t hold it against them if they can’t quite stick to it, as they’re still developing.

Why Do Dogs Sleep So Much?

Since little research has been done on the science of dog sleep, we don’t know exactly why dogs sleep so much (6). While their canine relatives like arctic foxes and gray wolves are most active at night, it may be that domestic dogs sleep at night (as well as off and on during the day) as an adaptation to life with their human companions, per a 2020 review in Current Opinion in Behavioral Sciences.

Otherwise, dogs sleep so much for the same reasons we do: They’re getting the restorative rest their bodies and minds need to function optimally, processing and storing away memories, and learning impressive new words and tricks like “sit” and “lie down.”

Is My Dog Sleeping Because of Boredom? 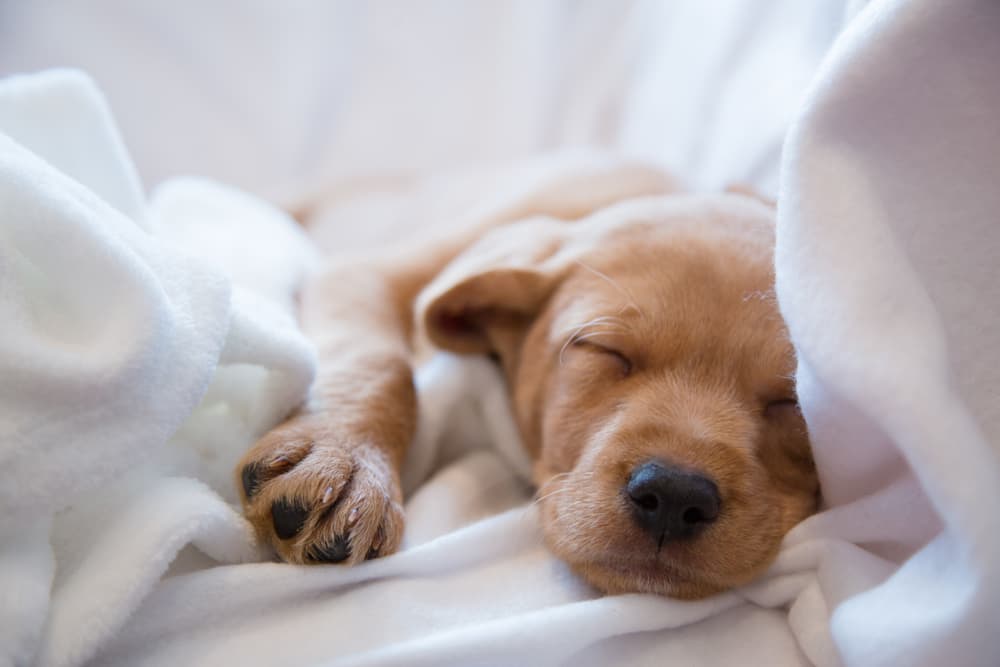 All dogs naturally need lots of sleep, but environmental factors like how much time your pup spends exercising or, conversely, time deprived of playtime with pet parents and friends, can cause a shift in dog sleeping habits (7).

For example, one study published in the Journal of Veterinary Behavior found that dogs kept in a barren research facility slept about 20 percent more often than dogs who were provided with environmental enrichment in a modern facility.

If your dog has a clean bill of health but has taken to all-day snooze fests, weaving more exercise and social interaction into their day with midday walks, toys, and doggy daycare can help you ensure they aren’t sleeping out of sheer boredom (8).

If you’ve ruled out boredom as a factor but you’re still concerned your dog may be sleeping more than he normally does, it may be time for a veterinary visit. A change in sleep habits could indicate a deeper health issue.

Here, a few abnormal and potentially worrisome sleep habits to look out for:

Your dog sleeps all day. An extra-drowsy dog may be suffering from depression, diabetes, an out-of-whack thyroid, or hearing loss.

His sleep schedule is off. Is your elderly dog wandering around at night all of a sudden, having accidents, and out of sorts? A change in an older dog’s sleeping patterns could be a sign of canine cognitive dysfunction (CCD), which causes behavior changes similar to “sundowning” due to dementia in people, says. Flynn.

Your dog has trouble breathing or snores in his sleep. Sleep-disordered breathing can cause loud snoring and daytime drowsiness, especially in short-nosed and toy dog breeds such as English bulldogs, Boston terriers, Pekinese, and pugs, says Barrack.

He suddenly passes out in the middle of the day. If your puppy falls asleep mid-play or mealtime, he may have canine narcolepsy, a rare neurological disorder that can be inherited by breeds such as Doberman pinschers and Labrador retrievers. Symptoms often first appear in young pups (9).

He literally chases rabbits in his sleep. If your dog begins twitching in his sleep and then pops up and starts running, barking, or attacking, he may have REM Sleep Behavior Disorder, a sleep disorder that can cause extreme or violent physical activity during sleep (10).

Here’s when to worry: “Any noticeable change in a dog’s routine or behavior, whether it’s a change in thirst, urination, appetite, behavior, or sleep, warrants a discussion with your veterinarian to rule out any underlying medical cause,” says Klein.

Remember: You know your dog better than anyone else, and if you suspect something’s wrong with his sleep health, experts agree—the sooner you can get your pup checked out, the better. Otherwise? Let sleeping dogs lie.

Cassie Shortsleeve is a freelance health and lifestyle writer based in Boston, Massachussetes. She has years of experience researching, interviewing, and investigating trends, and writing for the web and in print. Her writing has appeared on MensHealth.com, Men's Health, Yahoo!, WomensHealthMag.com, Women'Her work has been published in national magazines including Men's Health, Women's Health, Shape, and Conde Nast Traveler.