Dogs communicate in a variety of ways. They bark and use their body language to bow and move their ears and tails. Another clue into dog communication is to look at a dog’s hackles.

Let’s take a closer look at what hackles are, how they work, what they represent when they are raised, and what pet parents can do if they notice raised hackles on their pups. 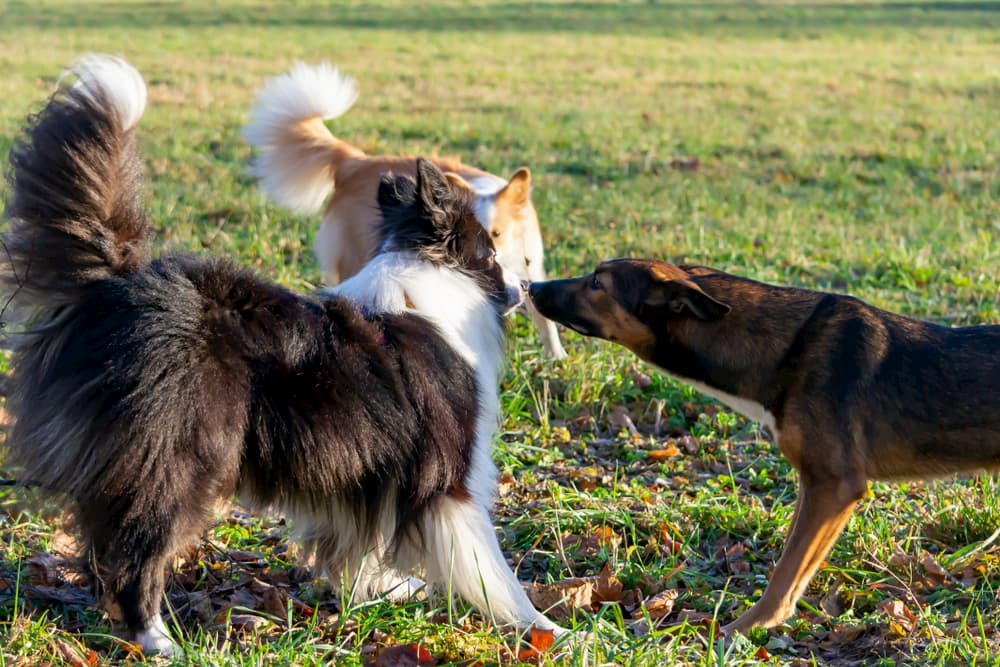 Hackles are the group of hairs that stand up along a dogs neck and back caused by a fear response or to show dominance over another animal.

Dogs aren’t the only species that have hackles. Birds have hackles around their necks and erect their feathers when they are asserting dominance. Roosters have brightly colored hackles, or erectile plumage, to be more visually loud. Cats have hackles along their backs and tails, and this is the typical image we see of the “Halloween” cat with arched back and fur standing up to make them look larger. We see this often when the cats are fearful or feel threatened. 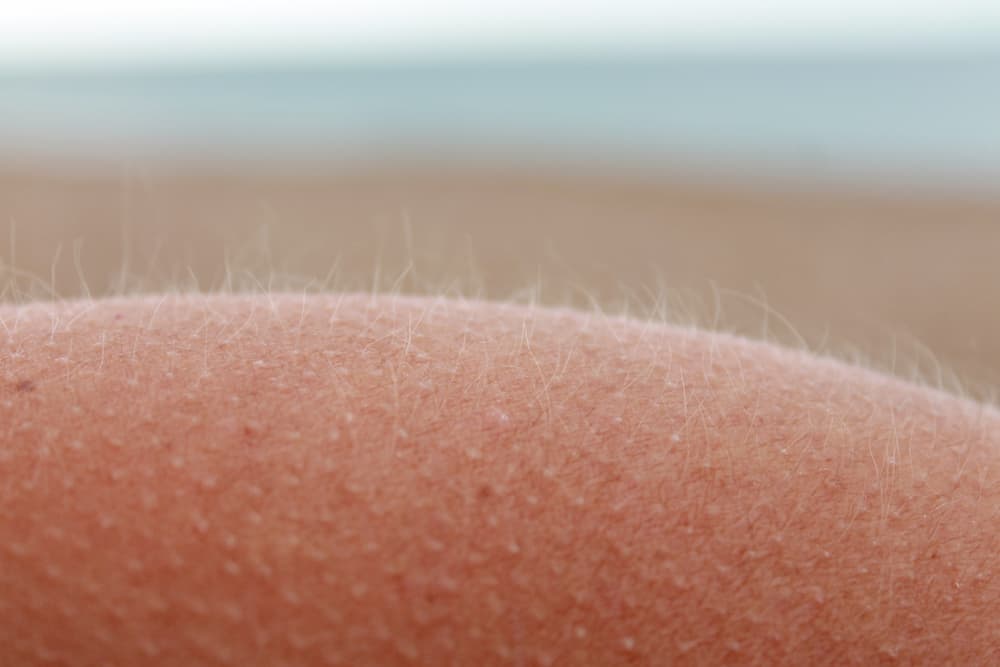 Piloerection is the bristling or raising of hairs. A dog’s hackles that stand up along their backs have a specialized muscle called arrector pili muscles that cause piloerection.

Piloerection is due to a reflexive trigger of the sympathetic nervous system—the fight or flight response. When the nervous system is triggered by an event, such as coming into contact with another animal, the sound of a doorbell, or strange noise in the middle of the night, the dog’s nervous system becomes activated to be on high alert. The arrector pili muscles contract around the hair follicles to make the hairs stand up and the dog appears larger and taller. This is a visual warning to other animals and threats that the dog is ready to fight and defend their territory, or assert their dominance.

Piloerection can happen in humans, too. Ever get a nervous, excited, or chilling feeling and goosebumps appear? Your sympathetic nervous system causes the tiny muscles in the skin to contract, raising the hair follicles which create the little goosebumps and your hairs to stand straight up. This is our sympathetic nervous system triggering us to get ready for a fight or flight response. 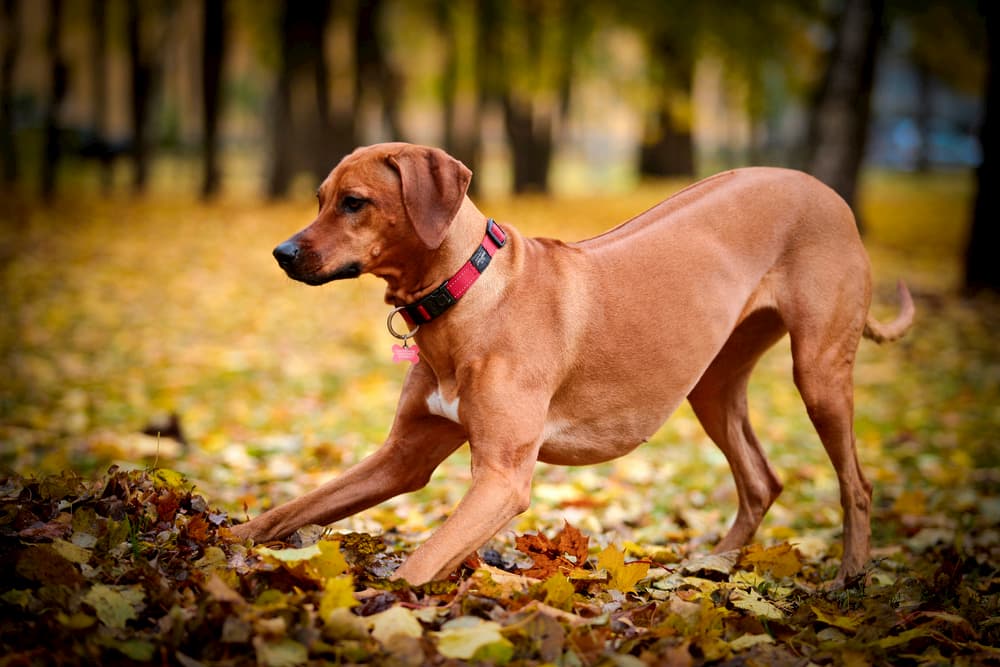 Dogs with longer hair can have a more pronounced effect when hackles are raised, especially when the hair may be longer around the neck region.

Rhodesian Ridgebacks look like their hackles are always raised, but this is just due to the growth of their hair in a forward motion along their backs.

Some dogs, such as Poodles or Poodle mixes (Labradoodle, Bernedoodle, Goldendoodle) have less pronounced hackles due to their curly coat. It can be hard to decipher any raising of the hair follicles from the normal hair around the arrector pili muscles.

Dogs With Raised Hackles: What Does It Mean? 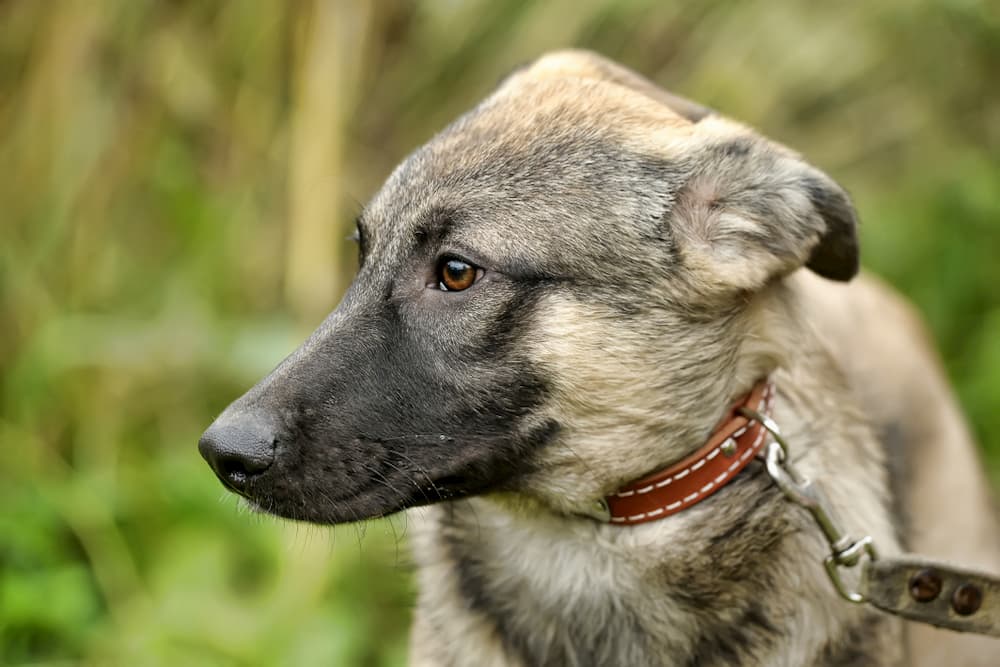 Raised hackles in dogs mean they are on high alert. They could be having a response brought on by fear, dominance, surprise, insecurity, or uneasiness about a situation. The nervous system automatically causes piloerection along the neck and back. This is done automatically, and not under conscious control of the dog.

When you see raised hackles on a dog, be aware of what the trigger is. Sometimes it could be the ringing of the doorbell, other times it might be meeting a new dog or person.

Some younger dogs raise their hackles more often because they are still getting to know their environment and the world around them. Their sense of security might be a little less solid than an older dog who is more confident.

By having the hairs along their neck and back stand up, dogs appear taller and bigger to whatever threat they are reacting to. Dog hackles are more of a visual cue to their trigger that they are big, dominant, and ready to defend themselves if necessary.

Although rare, there have been a few reports of dog hackles being raised when they are not stimulated by an outside trigger. Dogs with neurologic diseases can have a “malfunction” of the autonomic nerves, and cause the arrector pili muscles to contract when not stimulated.

What if a Dog’s Hackles Are Up When Playing?

Sometimes dog hackles can be raised during times of play.  Overstimulation, excitement, and surprise can cause piloerection. Watching to make sure the hackles go down, or that the dog isn’t showing other signs of aggression is key to having safe playtime.

What to Do If Your Dog Hackles are Raised? 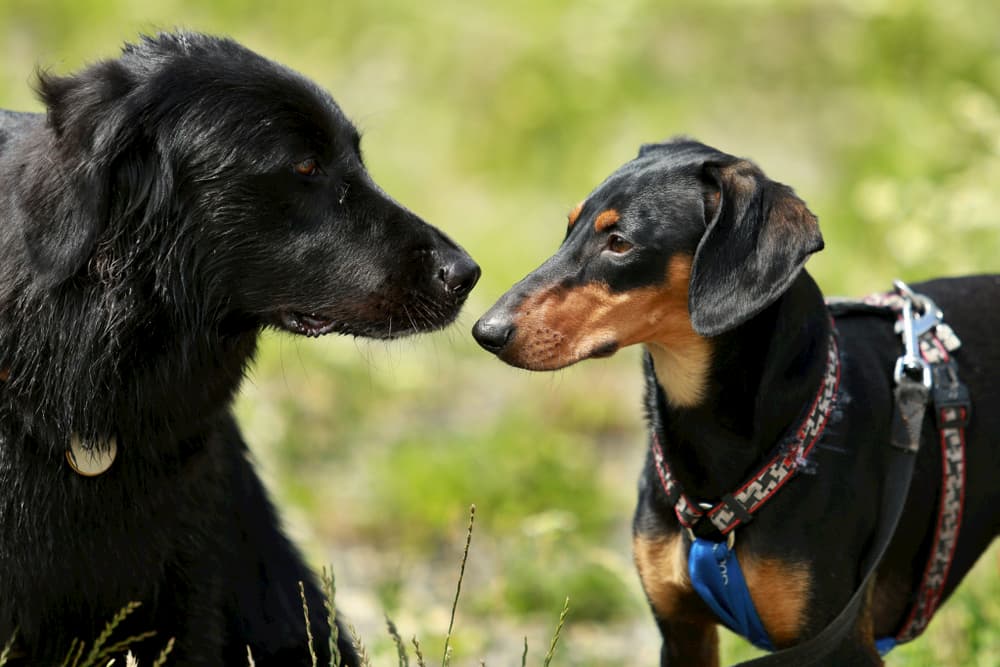 Most of the time, pet parents don’t need to do anything in particular if they notice that a dog’s hackles are raised.

When new dogs are introduced to each other, or a dog is in a new environment, some pups will have their hackles raised. It’s similar to “stranger danger” mode until they sniff and get to know the other dog or environment they are in. They want to appear bigger and tougher, just in case they need to defend or fight for their territory.

Most of the time, once the sniffing and introductions have been made, the dog will relax and therefore their nervous system will, too. The arrector pili muscles will relax, and the hair will go back to their normal position.

If your dog’s hackles are raised for an extended period of time, or if they are barking, growling, in a rigid position, or not listening to your commands, it’s time to separate them from the inciting cause (other dogs, people, animals). This situation could escalate into aggression, which could be harmful to you or other people and pets.

Be careful when you intervene with a potentially aggressive situation, as you do not want to put yourself in harm’s way. By knowing your own dog’s cues for escalation, you can prevent potential problems.

Dr. Tori has a strong interest in preventative medicine using nutrition, lifestyle, and supplements. She is trained in acupuncture and combines that with laser therapy and massage for pain management. Dr. Tori wants to empower her clients and pet lovers by providing practical and tangible pet tips for everyday life. She splits her time between San Diego and Los Angeles, with her husband and two dogs, Huey and Ollie.