A dog’s brain is a fascinating thing. While dogs can’t talk, they express their feelings and desires through wagging tails, facial expressions, and varying barks. Dogs are cognitive enough to experience joy, fear, anger, excitement, and pain—and they also happen to be smarter than your average two-year-old.

Recent imaging studies show that dogs recognize our faces and that their brains react like ours when exposed to positive stimuli. Thanks to these studies, we now have scientific answers about how a dog’s brain works.

Here are 12 amazing dog brain facts to quench your curiosity and help you appreciate the intellect of your canine companion.

1. A Dog’s Brain is the Size of a Tangerine

Brainpower is often associated with the size of the brain in relation to the body. A dog’s brain is about the size of a tangerine. That means it doesn’t have as many folds as the human brain or the capacity for higher thinking.

The human brain-to-body ratio is 1:40. In dogs, it is 1:125 across all breeds, according to a study published in the Intelligence issue of Popular Science. This means that while dogs don’t have as much brain power as us, they have a lot more compared to other animals (the ratio for great white sharks is 1:2,550).

2. A Dog’s Cerebral Cortex Differs From a Human’s 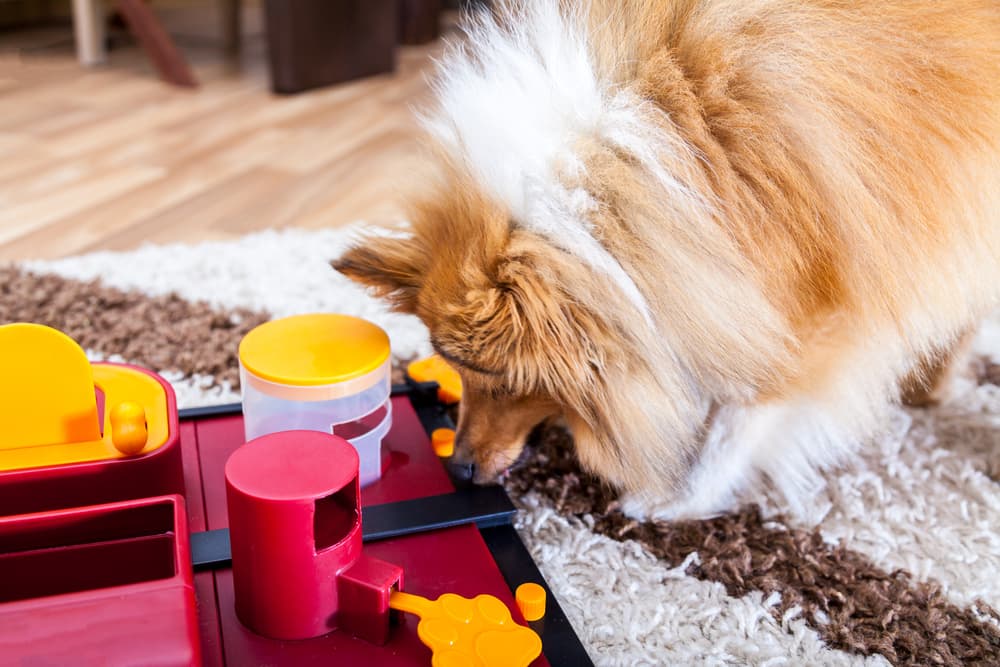 The brains of both humans and dogs have some similarities, but some major structural and functional differences. The biggest variation relates to the makeup of the cerebral cortex, the largest part of the brain.

Dr. Gregory Berns, a neuroscientist at Emory University, was the first to conduct fMRI scans to see inside a dog’s brain. An fMRI is a form of imaging that measures brain activity while the subject is active.

In his book, “How Dogs Love Us: A Neuroscientist and His Adopted Dog Decode the Canine Brain,” Berns states: “The largest part of the brain—the cerebral cortex—is radically different in dogs and humans. Presumably, that is what makes us different from each other.”

Humans and dogs have similar chemical changes and hormones in the brain. This includes the release of oxytocin. This release creates a sense of love and affection when a dog and a human look into each other’s eyes, according to a 2015 study.

Just like us, they also feel excitement, fear, anger, distress, and pain. However, dogs are not capable of experiencing more complex feelings. What you may think of as a dog expressing guilt when caught doing something wrong is merely a feeling of fear as they wait for your reaction.

Because dogs experience emotions like us, they are also prone to experiencing depression, anxiety, and even post-traumatic stress syndrome (PTSD). This is why anti-anxiety medications—like selective serotonin reuptake inhibitors (SSRIs)—can help.

Dr. Jill Sackman, veterinarian and owner of Animal Behavior Consultants of Michigan, who has a PhD in molecular and cellular biology, references a study where Prozac helped improve anxiety and depression symptoms in dogs.

“Serotonin is an important neurotransmitter in the brain and appears in areas in the brain in dogs (and other animals) as it does in humans,” she says. “There are studies that show that when dogs are on Prozac they have an ‘optimistic’ bias.”

5. Dogs Do Not Make Plans

Despite a dog’s ability to experience a wide range of feelings, including both happiness and sadness, Sackman says that dogs live in the moment and don’t let emotions get in the way.

“They live rich emotional lives,” she says. “But we have no evidence that says that they plan any events in the future—skills that require the prefrontal cortical development that higher primates have.”

6. A Dog’s Brain Is Wired to Respond Positively To Rewards

More research by Berns revealed that a dog’s brain lights up when exposed to hand signals associated with reward. The same area responds similarly in humans when exposed to positive stimuli.

This all comes down to the caudate nucleus, part of the basal ganglia in the brain. This caudate nucleus plays a role in learning by storing and processing memories. It’s also rich in dopamine receptors—which are associated with the sensation of pleasure in both humans and dogs.

In an article Berns wrote for the Smithsonian Magazine, he mentions that the caudate nucleus (and the reward system) belongs to the ancient reptilian part of the brain that all mammals have, making it similar in both dogs and humans.

7. A Dog’s Brain Is Dedicated to Analyzing Smells

Dogs have an incredibly powerful sense of smell, as proven by the large part of the brain dedicated to olfaction. It is because of this keen sense of smell, and association of scent with memories, that you’ll find dogs trained to sniff out bombs, drugs, and work on search and rescue teams.

In his book, Berns explains the differences between how humans and dogs sense smell:

Dogs use more than smell to recognize their humans. Through evolution, their brains have developed to recognize human faces and understand emotional and visual cues, which they use to guide their own behaviors.

According to a study conducted at the Institute of Neurobiology at the National Autonomous University of Mexico, there’s a specific region in the brains of animals (specifically the bilateral temporal cortex) that is designed to recognize faces of the same species. But Laura Cuaya and her team found that dogs have a knack for recognizing human faces by studying brain scans.

The scans showed an increase in activity (neural cells) in the temporal regions of the brain when presented with human faces rather than images of everyday objects.

The study states: “Dogs are especially good at discriminating between two humans, even if they are both familiar to them, but also, they have a remarkable ability to pick up small but important signals in a human face.”

Human and dog brains exhibit similar stages of electrical activity, leading to the conclusion that dogs can dream. In fact, it is safe to say that they dream about common activities they engage in daily, like chasing squirrels and barking at the mailperson.

Neuroscientists Kenway Louie and Matthew Wilson of the Massachusetts Institute of Technology (MIT), studied the activity of neurons in the rat hippocampus and suggest that rats’ brain functions seems to indicate dreaming.

The hippocampus is important in forming and encoding memories, and because a dog’s brain is more complex than that of a rat, it’s reasonable to conclude that they dream as well.

10. Dogs Are as Smart as a Two-Year-Old Child 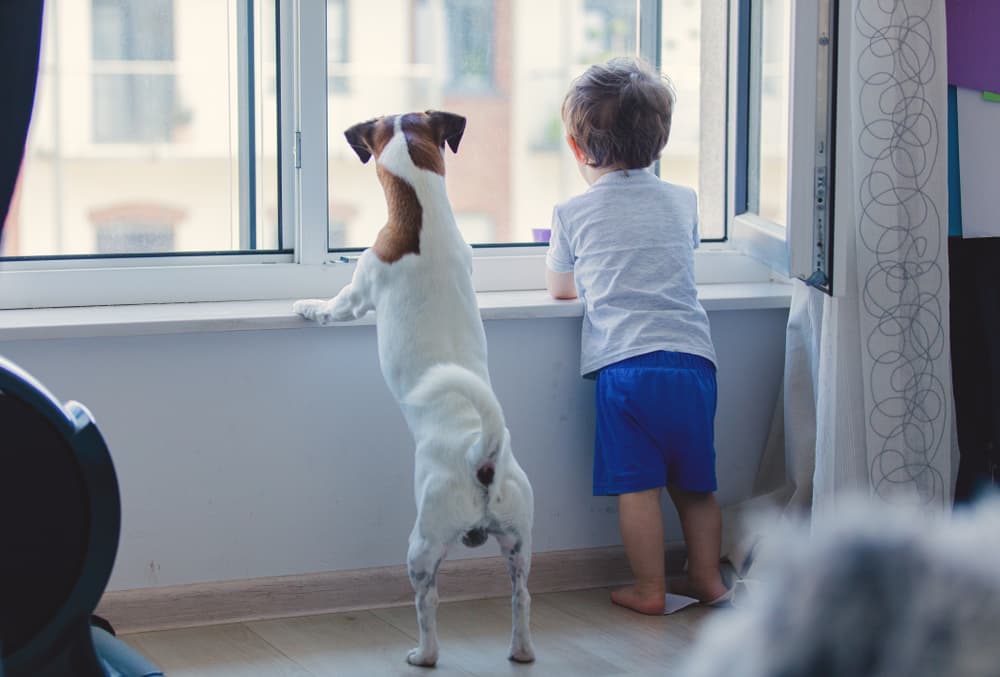 Researchers, including author Dr. Stanley Coren, have conducted both language and mathematical tests intended to test skills in children have determined that dog intelligence is at the level of a toddler. Dogs can learn up to 165 words, the same as a two-year-old human, and they can outsmart a three or four-year old in math.

“If we credit two-to four-year-old humans with consciousness and reasoning, then, in the absence of data to the contrary, it seems appropriate that we grant the same to dogs,” Coren writes in his book “How Dogs Think, Understanding the Canine Mind.”

Because dogs have the capacity and eagerness, it is important to use brain teaser exercises and puzzles to keep them mentally stimulated. Dr. Sackman says that these exercises can “teach them new skills, mentally enrich their lives, and increase engagement with their people”.

11. Dogs Are Smarter Than Cats

A study published in the journal, Frontiers in Neuroanatomy in 2017, concluded that dogs are smarter than cats based on the amount of neurons present in their cerebral cortexes. Neurons are information processing units associated with intelligence—the higher their numbers, the higher the capacity of the animal to think, plan, and exhibit complex behavior.

This study counted the neurons in the brains of a number of animals. Dogs have more than twice the number of neurons as cats (530 million vs. 250 million cortical neurons). Humans have 16 billion neurons.

It’s delightful seeing dogs slurping up the last bit of dog-friendly ice cream on a hot summer day, but there’s a likelihood that your dog could experience brain freeze. Brain freeze is a temporary headache that occurs when eating cold foods quickly.

“‘Freeze brain’ is phenopalatine ganglioneuralgia (pain of the sphenopalatine nerve),” says Sackman. “Since dogs and humans have similar neural structures on the roof of their mouths it is reasonable to expect that they might have similar sensations when eating a cold/icy treat. But we don’t know for sure.”

While we know to stop eating when we experience brain freeze, dogs may not. To prevent tingling of the nerves, give your pup icy treats in small doses or mix them up with regular treats.