Coughing is a normal response to any irritation in your kitty’s airways or throat. Even though it’s a normal response, cats should not cough often or cough regularly. Most pet parents have never even heard a cat cough before!

So how do we know if our cat is coughing or if he is doing something else? When should we be concerned? And what causes cats to cough? Read below to find the 11 most common causes of coughing in cats.

Cats can cough just like people do. However, it is less frequent than us. Any irritation in the respiratory tract could lead to a cough. Coughing on rare occasions (once every few months or even less frequently) could be normal, but most cats do not cough unless something is wrong.

A cat’s respiratory system goes from the nose all the way to the lungs—including the nasal cavity (chamber of the nose), pharynx (throat), larynx (voice box), trachea (windpipe), and lungs. Inside the lungs are passageways for air called bronchi that get smaller and lead to bronchioles. Coughing is stimulated by irritation anywhere from the pharynx down to the bronchioles, so knowing exactly why (or from where) the cough is coming from can be tricky.

A cat that coughs usually stops what activity they are doing and sticks out their head, extending their neck. You may hear one cough, or several—and if your cat coughs several times in a row, he will stand or sit in one place during this.

When coughing, a cat’s chest and belly movements are dramatic since a cough is a forceful push of air out. Cats will not pant or hold their mouth open wide when coughing, and coughing is not really fast—each cough will likely have at least a second or two in between.

There are two types of cat coughs: a dry cough or a productive (wet) cough. The lining of the whole respiratory system contains cells that secrete mucus, or the thick gooey material you see when blowing your nose. Some causes of coughing will increase mucus production and produce a wet cough, while others will not and produce a dry cough.

A dry cough sounds like a “honk” or “wheeze” and your cat does not swallow afterward.

It is very challenging for pet parents to know if their cat is actually coughing or producing a different sound. Some other things that could be happening instead of coughing include:

Retching occurs when something is caught in the back of the throat, and cats will usually make a sudden loud noise with their mouths wide open briefly before shutting it again. Retching can occur after a fit of coughing, and a very small amount of fluid or possibly food may come out.

Reverse sneezing usually occurs in fits and comes from irritation in the nasal cavity and throat. Your cat’s mouth is likely mostly closed, multiple sneezes happen rapidly without pausing, with the lips pulled back as your cat draws air inward (instead of out like coughing). There is likely to be swallowing afterward.

Vomiting is when the body releases stomach (or nearby small intestine) contents out through the mouth. Fluid and foodstuff (unless your cat’s stomach is empty) will be produced. In some cases, a mass of fur will come out as well. Your cat’s belly will dramatically move while he works up to vomiting, and he will definitely stop moving or being active in order to vomit. Most cats vomit more than once in a single instance of vomiting, but it can be separated by several seconds or perhaps several hours.

To know if your cat is coughing, take a video of when it is happening and show it to your veterinarian. Your veterinarian will be able to diagnose whether the noise you are hearing is coughing or not. Make sure you are close to your cat for the video to get good sound quality, but not so close that you cannot see the face, throat, and chest areas during the coughing.

Common Causes of Coughing in Cats

There are many causes of coughing in cats—remember, the issue could be anywhere from the throat to deep in the chest. Determining the cause of your cat’s coughing will dictate the treatment plan.

Possible causes of cat coughing include:

This can be caused by feline herpesvirus-1 or feline calicivirus (or rarely influenza). These viruses are contagious from cat to cat and very common. Cats can develop an infection as a kitten and harbor the virus for the rest of their lives. Most of the time these viruses affect the upper airways, such as the nose and throat. If the throat is inflamed and irritated, coughing may occur.

Approximately 1 percent of ill cats are diagnosed with chronic bronchitis (or feline asthma), which is a similar disease to asthma in people. This is a disease related to inflammation in the air passages and causes chronic dry cough in most cases. Cats can hide disease well however and may suddenly begin coughing and struggle to breathe as opposed to showing chronic cough. Siamese and Oriental cats are predisposed to this condition.

This is inflammation of the airways in the lungs caused by infection. It can occur due to:

Bacteria such as Mycoplasma spp. or Bordetella bronchiseptica. These bacteria are rarely alone and often infect the upper airway and/or lungs with a virus. Coughing occurs suddenly and is usually accompanied by fever, decreased appetite, decreased activity, and sneezing with nasal mucus.

Parasites known as lungworms (Aelurostrongylus abstrusus or Eucoleus aerophilus). These parasites sit inside the air passages in the lungs and cause inflammation leading to a cough in cats. These are more common in young cats that live outdoors.

Pneumonia in cats refers to inflammation of the lungs in general. Pneumonia comes on quickly and makes your cat feel very sick—likely feverish, lacking appetite, no activity, and perhaps struggling to breathe. This can be caused by many things such as:

Aspiration which happens when vomit or stomach fluid is accidentally breathed in instead of swallowed, usually occurring with severe episodes of vomiting or anesthesia/sedation.

Foreign Body in the Throat

Occasionally parts of plants, objects your cat attempted to eat, or even a furball can get caught in the throat area or inside the nose. If a foreign body is there, it creates inflammation as well as mucus that can cause a cough.

This is a mass caused by chronic inflammation of the nose or throat. Oftentimes there is no specific underlying reason. These swellings create inflammation and usually mucus, creating a cough, as well as possibly voice change or loud breathing through the nose like snoring.

Edema is when fluid fills the air passages of the lungs, causing coughing as the body attempts to get rid of the fluid and struggles to breathe. This can be caused by the heart (cardiogenic) or not. Coughing due to heart failure is exceedingly rare in cats, so if edema is present, it is unlikely to be related to heart disease. Even so the only way to know is to have your cat’s heart examined by a specialist, or cardiologist.

Cancer in cats can cause cough in many different ways. One way would be if a large mass is growing in the chest or throat area and pushing on the trachea (windpipe) or air passages of the lungs. Another possibility is cancer found inside the throat, windpipe, or air passages themselves.

When cats experience trauma, bleeding can occur inside the air passages resulting in a cough. Sometimes the lungs themselves can be punctured so air escapes and makes it harder to breathe. In any case, these cats need medical attention right away.

There are many lymph nodes naturally found inside a cat’s chest cavity that work within the immune system. Cancer or severe infection can cause these lymph nodes to swell, and if they swell significantly they put pressure on the windpipe and air passages, resulting in a cough.

Rare Causes of Coughing in Cats

While the above causes of coughing in cats are more common, there are other reasons that may produce a cough. The following causes are rare and do not happen often in our feline companions.

Infection with Dirofilaria immitis is much more common in dogs since cats are naturally resistant. When cats do have a heartworm infection, however, it is often life threatening if the cat is experiencing symptoms. Cough occurs as the heartworm parasites live inside the air passages, causing severe inflammation. Any cat who lives outdoors in areas known to have heartworm disease and does not receive monthly heartworm prevention (topical on the skin or by mouth) may have heartworm disease.

This means the air passages of the lungs have had severe chronic inflammation and are permanently thickened and hardened. Because of the inflammation, coughing occurs.

This condition is more common in dogs than it is in cats. The larynx is the opening to the windpipe and consists of two folds of tissue that open when your cat is breathing in. If these folds are paralyzed or unable to open, it creates inflammation and a decreased ability to breathe in, causing a cough.

How to Treat Coughing in Cats

How a coughing cat is treated depends on the cause of the coughing, so a diagnosis by a veterinarian is important.

Some of the more common treatments for coughing in cats include:

Cats that have more serious conditions such as pleural effusion, trauma, or severe pneumonia may need to stay in the veterinary hospital and be treated with oxygen, medications, and special procedures like the removal of fluid from the chest. This is done through a needle—a minor procedure called thoracocentesis.

If a foreign body or polyp is present, your veterinarian may recommend anesthetizing your cat at the hospital and examining his mouth, throat, and nasal cavity while sleeping. If a polyp is found, the veterinarian may be able to remove it. Flushing the nasal cavity may help if a foreign body is stuck near the back of the throat, or if there is a large amount of mucus production.

Two medications that treat coughing in cats are known as dextromethorphan and guaifenesin. These medications can be found over the counter and in human medications. These are rarely recommended for cats as they are largely ineffective and do not treat the cause of the cough which can worsen with time.

If your cat is coughing, cough medicine is not recommended. He needs to be seen by a veterinarian.

When to Worry About a Coughing Cat

If your cat is heard coughing one day and you had not heard it before, monitor him closely. A cat that is coughing, even occasionally, for two weeks or more likely has a chronic medical issue that needs attention, even if he is not experiencing other symptoms of illness. Realizing your cat is coughing and bringing him to the veterinarian early is the best way to keep your cat healthy.

If your cat is coughing a lot one day or appears to be in distress, he should be seen by the veterinarian right away. Specific symptoms that would indicate your cat needs to be seen immediately include:

Breathing appears exaggerated, such as the chest and/or belly are moving in and out quickly or dramatically or your cat is open mouth panting/breathing 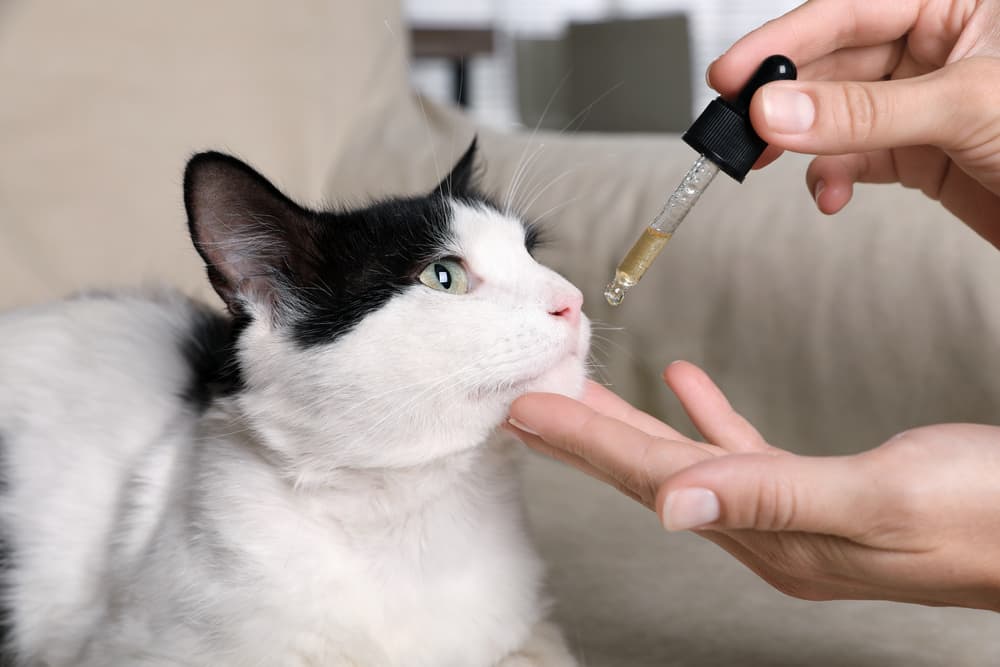 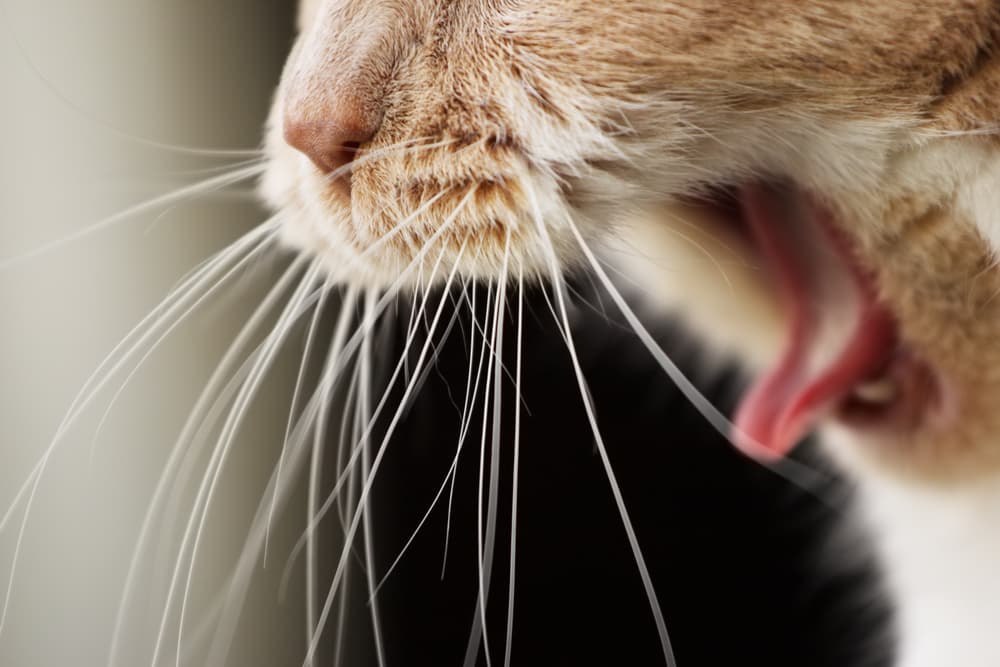 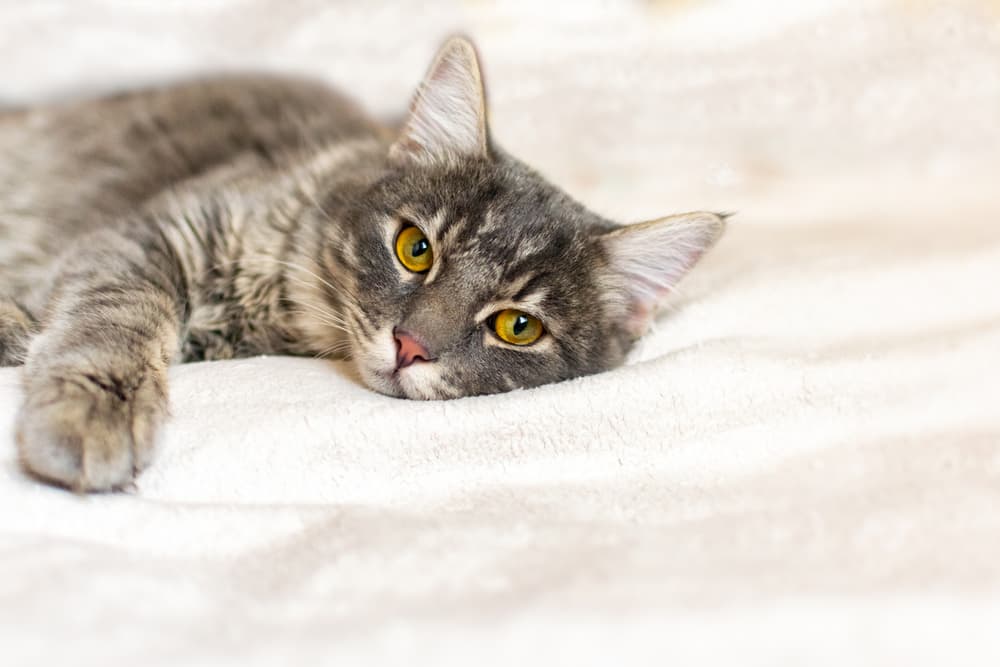 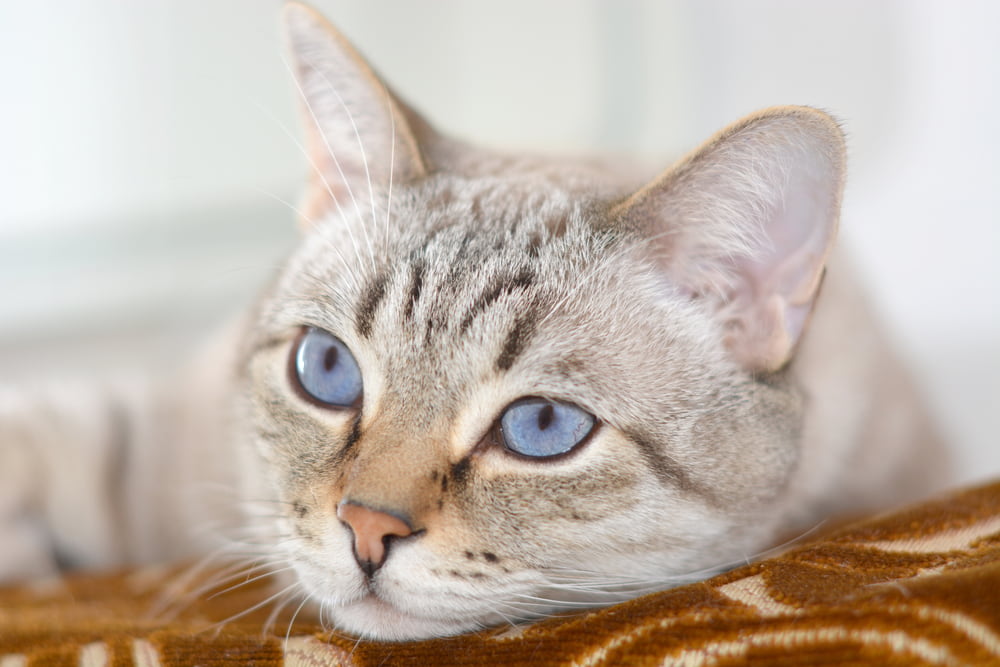 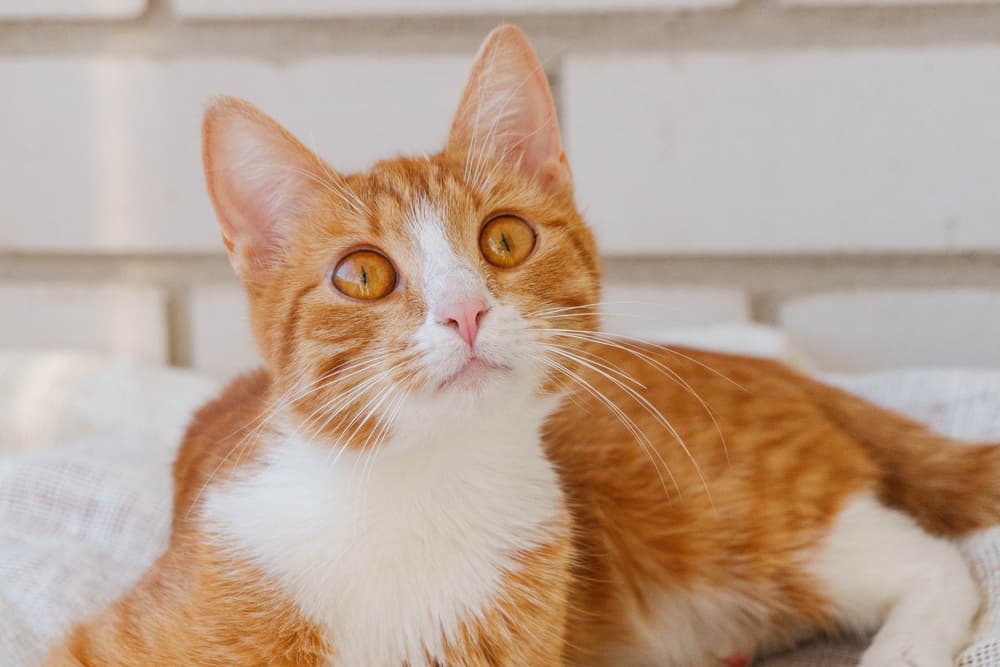 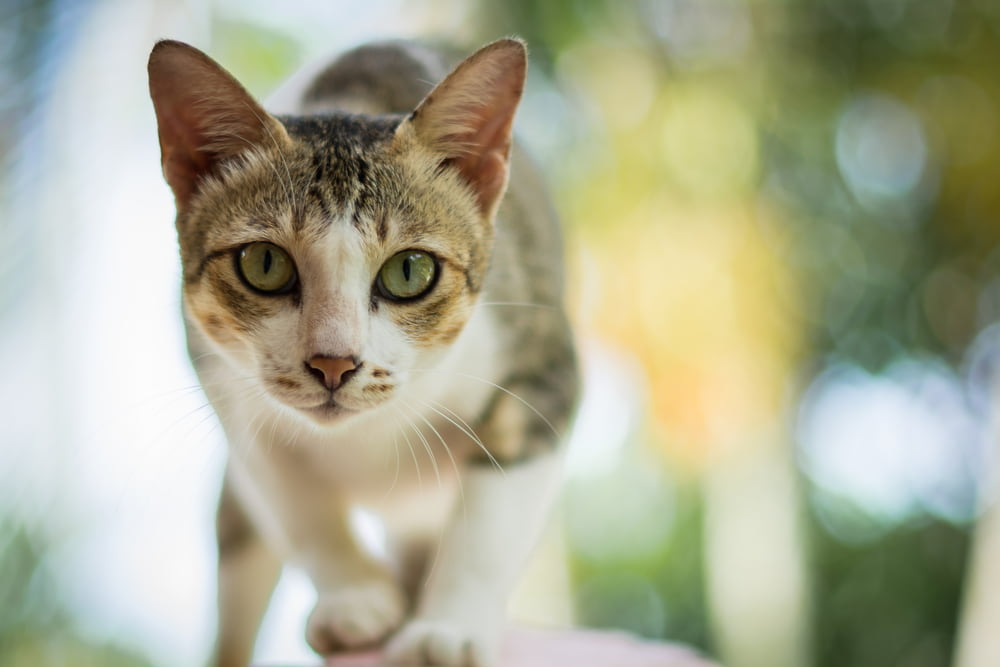