A cat’s sandpapery tongue, covered in hundreds of tiny spines called papillae, is far more sophisticated than many of us realize.

In addition to basic functions like tasting, cats’ tongues serve as super-advanced combs in their frequent grooming sessions. They help them lap up drinks. Studies have even found that papillae can help cats hold onto dense meat while they eat (1).

But cats’ tongues aren’t only about utility. Many felines also use their tongues to show affection by licking their pet parents. Here, we break down what it means when a cat licks you and what to do if it ever becomes a problem.

What Does It Mean When a Cat Licks You? 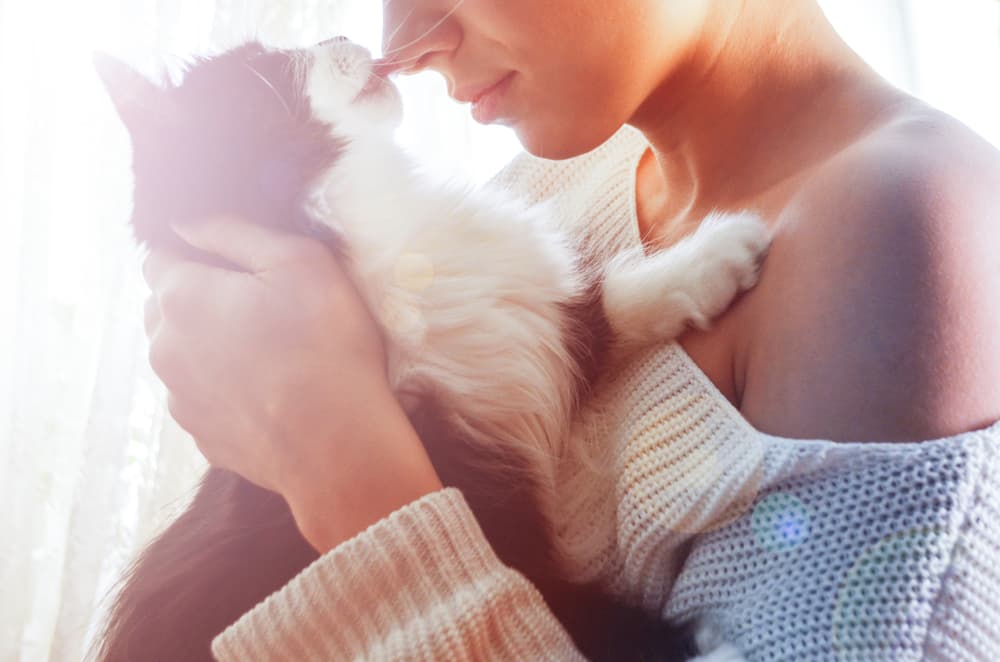 “Licking is a very natural behavior for cats,” says Jennifer Van de Kieft, a certified feline training and behavior specialist and the owner of Cat Advocate LLC consulting company. She notes that when kittens are born, their mothers lick them for the first three weeks of life, then begin teaching them the art of self-grooming.

Beyond grooming, cats also lick as both a calming behavior and to show their affection. In these displays of affection, “cats will lick each other, their humans, and even other pets,” says Susan Bulanda, a certified member of the International Association of Animal Behavior Consultants. “It is also a way to claim the object of their affection as theirs.”

According to Van de Kieft, cats typically go for pet parents’ hands, arms, and faces when licking them—partly because those areas aren’t shielded by clothing, but also because they’re the areas that they typically have the most interaction with.

Those same areas can also hold traces of tastes and smells that cats like. Van de Kieft has found that her five cats are all eager to lick her son’s hands when he has “butter fingers” after eating a bagel.

If your cat likes to hang out nearby while you shower, you may also be in store for some licking on your legs and feet afterward. According to Bulanda, that’s your cat trying to dry you off in the same way he’d lick himself when he gets wet.

“I think mostly it’s a sign of affection when they lick you,” says Van de Kieft. “They’re saying that they like you, they know you, you’re part of their family. It’s really a compliment when they lick us.”

“One of the highest forms of affectionate display from a cat,” adds Bulanda, “is if they lick the end of your nose.” 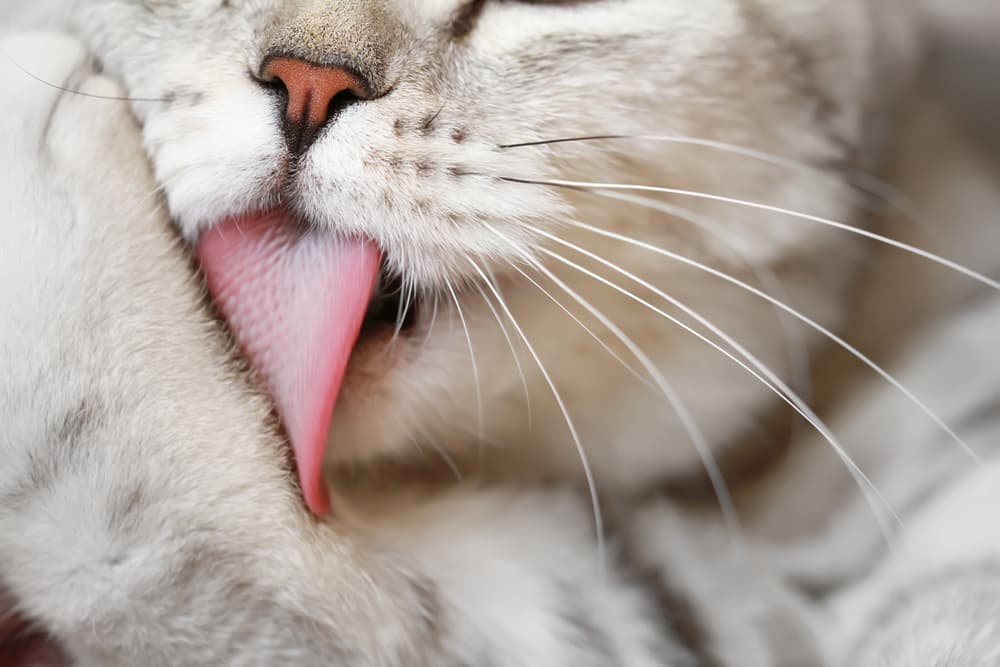 While having a cat who occasionally licks at your hands or face is completely normal, there are some licking behaviors that may signify a health or behavioral problem. Watch out for these signs:

Van de Kief says cats also lick as a way to soothe themselves. If your cat suddenly ramps up her licking, it could be a sign of boredom or stress, or simply a way to ask for more of your attention.

Van de Kief suggests considering what may have triggered the behavior and working on ways to calm your cat. Did you recently move? Has a new baby joined the family? Did you introduce another pet? Have there been any drastic shifts to your usual schedule and routine?

If your cat seems stressed and is licking more than normal, try providing more attention, interaction, and playtime. Or see if products like pheromone sprays or calming treats provide benefits. If you feel stuck, consult a veterinarian or a cat behaviorist to talk about options.

Overgrooming can sometimes indicate an underlying medical concern. For example, a cat who begins licking her stomach may have a stomach issue that’s causing her pain. Both Van de Kief and Bulanda recommend contacting your veterinarian if you notice your cat licking a certain area more than normal or if sudden behavior changes occur.

One minute your cat is gently licking your fingers. Then suddenly: snap. He goes in for a bite. What’s the deal?

Van de Kief says cats have different kinds of bites, and often when a nip follows licking, “it’s more of a love bite.” Other times, your cat may simply be letting you know she’s had enough.

There’s also another possibility that may explain a cat that licks and then bites. “Cats that are becoming sexually aroused will want attention and then bite,” Bulanda says. “If you see signs, stop petting them. Once you know your cat, you will know how long to pet them and when to stop.”

Any cat who may bite will show a combination of signs such as tail twitching, ears back or to the side, eyes wide, pupils (black center of the eye) big, fur on end on the back or tail, growl or low vocalizaiton, and even a tense body that looks like the cat could run away at any moment.

Whatever the root cause, if you’d rather not be on the receiving end of pointy cat teeth, Van de Kief suggests squealing “ouch!” anytime it happens. She says it’s similar to what a mother cat does: a quick yelp when her kitten does something that hurts. Van de Kief likes to follow the ouch up with “no biting.”

“Then you get up and walk away,” she says, “because they want your attention. You don’t want to reward that behavior with more petting or even scolding. Any response that you give could be reinforcing the behavior.”

How to Stop Cats from Licking 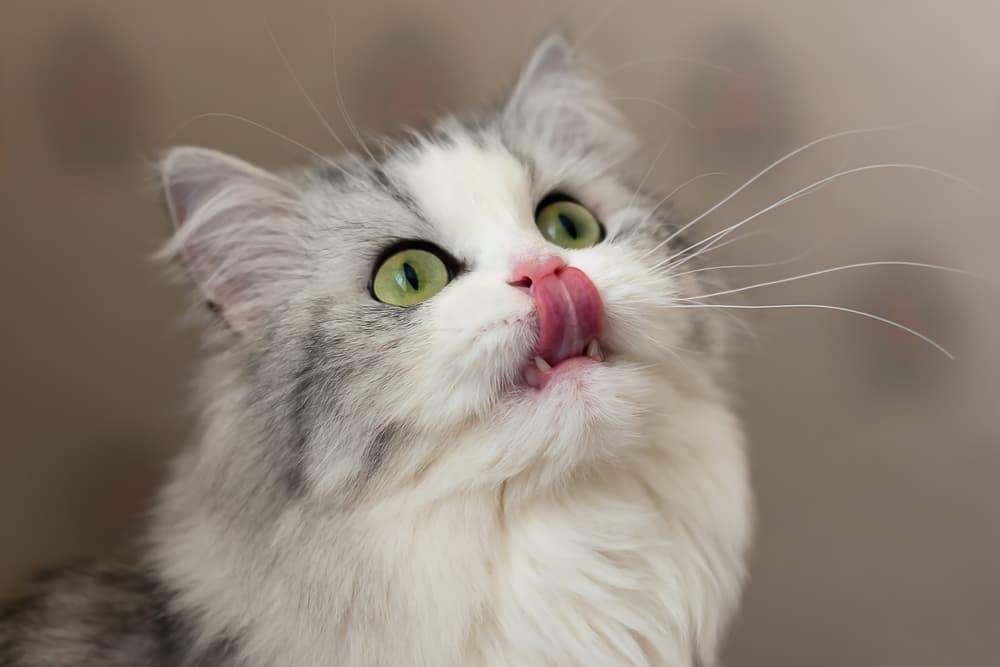 If you suspect that your cat is licking due to boredom or stress, Van de Kief suggests adding a play session or a food puzzle to their daily routine. “Cats need a lot more environmental enrichment than we give them,” she says. “Exercise and mental stimulation can really go a long way.” But again, she emphasizes that it’s best to speak to a veterinarian first if you notice unusual behaviors.

Van de Kief also recommends redirection. “If you know your cat comes and sits on your lap and is going to start licking you and want attention, what’s another way you can give attention?” she says. Turn that time into interactive play or work on some training cues.

Even if you don’t appreciate your cat’s licking, you shouldn’t punish your cat, says Bulanda. “If you do, your cat may learn not to trust you and become fearful.”