If you share your household with one of the 70 percent of cats who are genetically hardwired to go cuckoo for catnip, you have likely spent some time pondering what, exactly, is happening to your kitty while under the brief spell of this garden variety perennial?

Is it safe? Is there any biological purpose for your cat’s bonkers reaction to catnip?

Catnip’s effect on behavior varies widely from one cat to the next, and kittens don’t develop the “catnip response” until they are 3-6 months old. Different forms of the herb can have different effects on cats, ranging from playfulness to aggression to mild sedation.

Its effects aren’t limited to housecats, either. Lions and jaguars are also attracted to catnip, though tigers seem not to be affected. (1)

Learn about catnip in all of its forms, and how to use it safely with your cat. 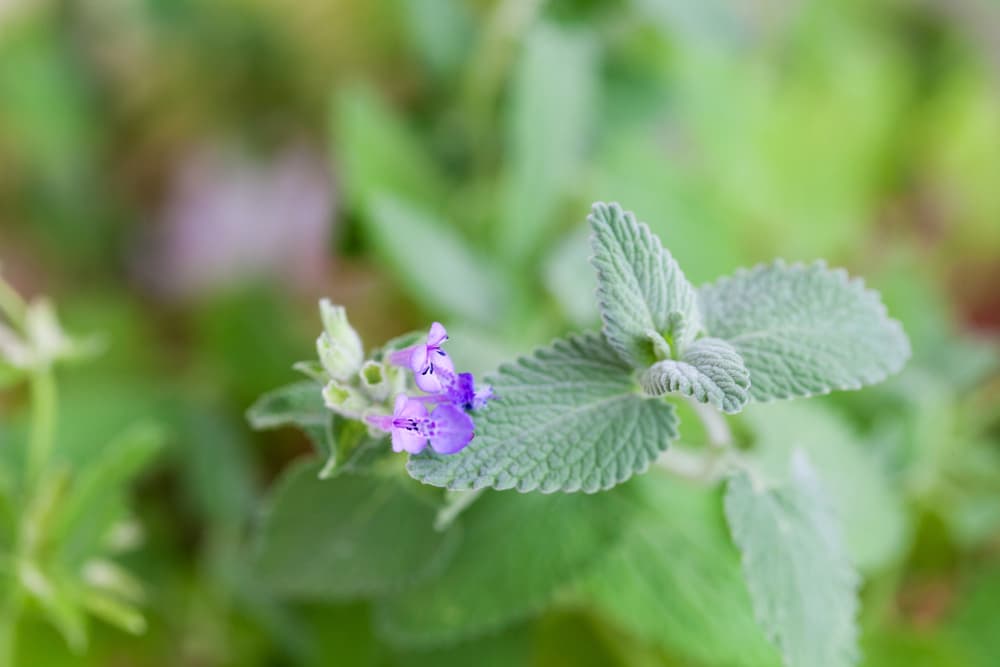 Catnip is a flowering perennial herb in the mint family that originated in Asia and now grows in the wild on almost every continent. Over the centuries, humans have used catnip in various forms for medicinal and recreational purposes, for everything from headaches and toothaches to a mild sedative to calm the nerves.

Common Catnip (Nepeta cataria) and Catmint (Nepeta mussinii) are the most common varieties of the plant, with Common Catnip being the one cats seem to enjoy the most.

Catnip contains an active organic compound called nepetalactone, a natural insect repellent the plant releases to deter pests like aphids while attracting aphids’ natural predators, like wasps and butterflies. Nepetalactone also happens to be very attractive to cats and is responsible for catnip’s famous—or infamous—behavioral effects.

Catnip is harvested in the spring and summer, when the plants are in full bloom, by clipping the stems about 10 to 12 cm above the crown. To dry the herb, it can be hung upside down in a dark, well-ventilated place. Dried leaves, stems, and flowers can be stored in freezer bags to preserve the essential oil inside them, which is the stuff that drives your cat wild. 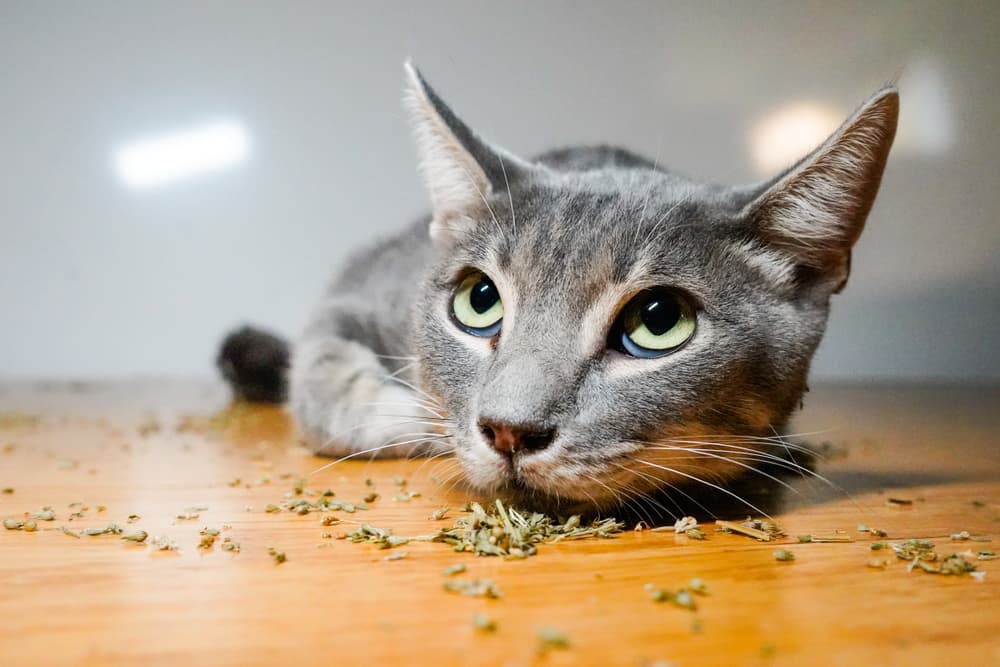 Every cat responds differently to catnip, but in general, chewing on a bit of catnip tends to have a calming effect, while smelling or sniffing it tends to elicit a more energetic response.

It can also be a helpful tool in training as well as for reducing anxiety, particularly for indoor cats, who can become bored and stressed more easily than cats that roam freely outdoors. Making sure indoor cats have opportunities to play and chase allows them to act on their natural instincts and can fend off problem behaviors resulting from boredom or anxiety.

A catnip-stuffed toy can add some excitement to your cat’s playtime, and when its effects wear off, most cats will also experience a pleasant calm for the next few hours.

“It’s a useful way to keep indoor cats stimulated and happy, even when their environment isn’t particularly thrilling,” says Dr. Michael Topper, past president of the American Veterinary Medical Association. It can also help some shy cats build confidence, he says.

Dr. Sara Ochoa, an exotic and small animal veterinarian, says she swears by catnip to help her cat feel less anxious about a visit to the clinic. “My cat hates car rides or having to go to the clinic with me, and I will usually give him a little catnip before we leave home and before we leave the clinic,” she says. “It helps keep him calm through the visit and on the way home.”

She advises cat parents to test out different forms of catnip to learn your cat’s reaction before trying any of these tricks outside the home.

As a training tool, catnip can be used to attract cats or acclimate them to new objects in their environment. If your cat is scratching the couch, pet parents can use it to encourage scratching on an approved object instead. If your cat loves the stuff, it can also be used as a special treat to reward or reinforce good behavior.

Catnip has another benefit unrelated to its feline namesake—the essential oil in the plant is more effective than DEET in repelling pests like mosquitoes and cockroaches from large areas. So, growing some outside your door might be a win-win for you and your cat. (2)

How Does Catnip Work?

Scientists and behaviorists don’t fully understand how catnip interacts with a cat’s brain to elicit its dramatic response. Experts have long agreed that there is a genetic component to the catnip response.

Whether catnip inspires your cat to mellow out or bounce off the walls, its effect is the result of a compound called nepetalactone, a type of chemical called a terpene, which makes up 70-99 percent of the essential oil found in the catnip plant.

When cats get a whiff of nepetalactone, the compound binds with specialized receptors in the tissue lining the cat’s nose, known as the olfactory epithelium.

A handful of studies provide clues to which brain pathways might be activated during a catnip-induced episode. It’s widely believed that those receptors in the nasal tissue kick off a chain reaction of neurons that eventually reach the olfactory bulb, the region at the front of the brain responsible for processing smells.

This region then signals the amygdala (responsible for emotional regulation, relaxation, and anxiety) and the hypothalamus (responsible for behavioral regulation). This chemical reaction in the brain causes the catnip response, which can look very similar to cats’ responses to certain pheromones. (3) 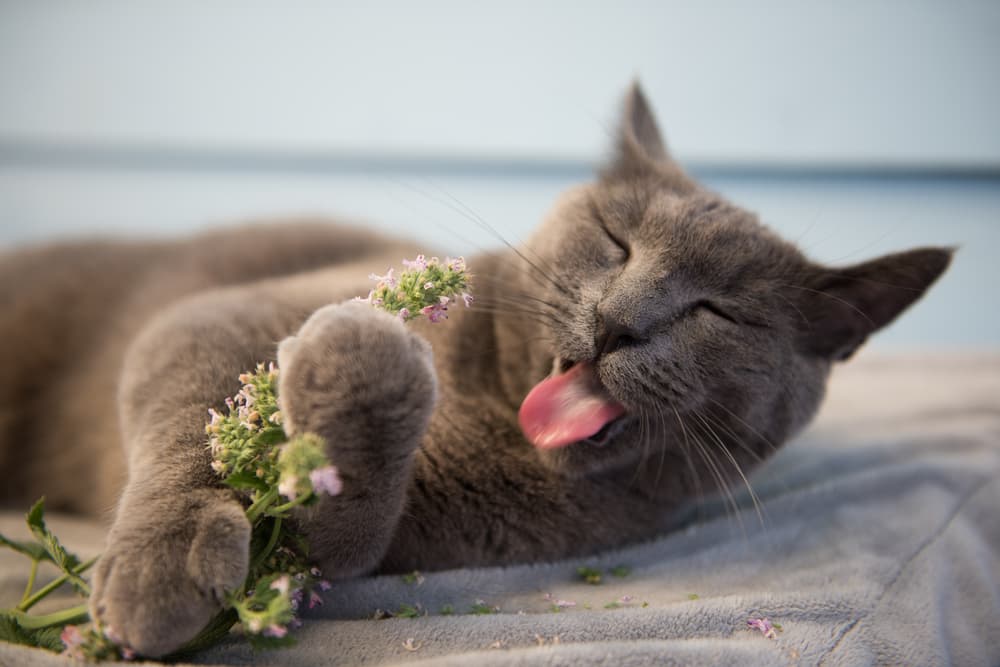 The classic catnip response is a 5- to 15-minute burst of activity that can range from blissed-out to downright berserk.

Upon smelling catnip, cats will usually shake their heads, paw at it, lick or chew on it, rub their faces on it, or go into a full-on body roll. This is usually accompanied by some purring, meowing, or growling.

Cats with a particularly strong reaction to catnip can become hyperactive—zooming around, leaping, jumping, or even becoming aggressive toward the catnip object or the hand holding it. After a little while, cats will begin to lose interest and zone out, maybe drooling a bit or becoming very relaxed or falling asleep.

For about two hours after the catnip experience, cats become immune to the effects of the leaves and will completely ignore the object that was so enthralling a few moments ago.

Sniffing catnip seems to prompt a more animated response, while chewing the leaves or ingesting them tends to have a more soothing effect. Either way, the final phase of the catnip response is one of relaxation, which is why veterinarians often suggest cat parents try it as an anti-anxiety aid.

Not all cats have the same reaction to catnip, and about a third of cats appear not to react at all—however, a recent study suggests that all cats may respond to catnip, but some may have an exaggerated energetic response, while others may have a more subtle reaction and simply become very relaxed when exposed to the herb. (4)

Kittens and older cats also seem to be less susceptible to its charms. For mature cats who do not respond to catnip or who seem to become too aggressive, cat parents might try alternatives such as silver vine or valerian, suggests Dr. Mikel Maria Delgado, a certified applied animal behaviorist at the University of California Davis.

Can Cats Get Addicted to Catnip?

Many studies have confirmed that while the majority of cats are attracted to catnip and may seek it out, catnip is not addictive for cats. Its euphoric effects are short-lived, and then cats become temporarily immune to the scent, so it’s hard for cats to overindulge. (5)

Catnip is not toxic, but if a cat eats too much of the plant, it can cause vomiting and diarrhea, so it should be used under supervision.

“I do not recommend repeated exposure to catnip,” cautions Dr. Mason Romero, of Generation Pet Veterinary Clinic in Houston, Texas. “If you plan to offer it to your kitty, do so in increments. Allow a week or more to pass between offerings. The more frequently they are exposed to it, the cat can develop a resistance to the effects.”

Veterinarians say the most common risk related to catnip is safety related. “If cats are flipping themselves around, catapulting themselves off the back of furniture, or running crazy through the house, you need to be concerned about them injuring themselves,” says Romero. “I have seen several catnip-induced injuries in my practice, ranging from broken claws to fractured teeth, and even a broken leg from a cat who tried to jump from the countertop to the top of the kitchen cabinets and fell about 8-9 feet.”

How to Give Cats Catnip 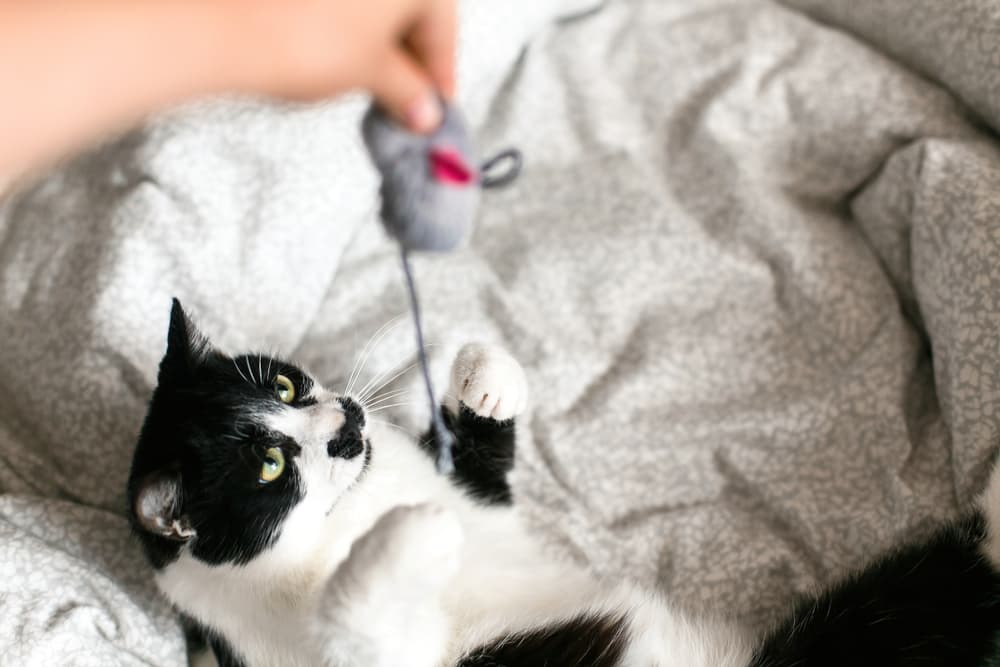 When it comes to catnip-delivery systems, there are many to choose from. These include:

As a general rule of thumb, look for catnip that contains mostly blossoms and leaves, which are the most potent parts of the plant. Lower quality forms will include a lot of dried, ground-up stalks and stems and may be less effective or attractive for cats.

When choosing which form of the herb to give to your cat, consider the desired effect. Catnip-filled toys and balls will encourage your kitty to sniff and play, while freshly cut catnip is more likely to be chewed, and may, therefore, be a good choice for easing anxiety. Sprays with a concentration of 50 percent nepetalactone or higher can be a helpful tool for attracting cats to a new scratching post, toy, or bed.

Loose, dried catnip is a versatile option, since it can be stuffed into a sock or refillable toy, or sprinkled on food, the floor, or any surface you want to make more attractive to your cat. Cats only need a small amount of good-quality catnip to enjoy its effects, so a small bag or container of catnip will last quite a while, depending on how often you use it.

If catnip flakes get too messy for you, opt for pellets, which are compressed catnip in a compact form. They can be put inside of toys or used on their own. Although the compressed pellets are not considered a cat treat, some cats will nibble on them, and this is perfectly safe.

It’s also easy to grow catnip in a sunny window or your garden, and you can give your cat the fresh leaves and flowers to chew on or roll in. You can also dry the leaves and flowers and store them as an occasional treat. If you do grow it, you may find your kitty seeking it out throughout the day and maybe even chewing on it. If you feel he’s overindulging, relocate the pot to a spot that’s out of reach.

Dried catnip loses its potency over time, so buying or cutting smaller quantities and storing it in the freezer can help prolong its freshness and effectiveness for your cat.

Dana Mortensen is a freelance writer and editor specializing in science, health and wellness, the outdoors and of course- animals. She lives in Philadelphia with her husband and their sweet, disaster-prone black lab mix, Zeke, whom she credits for some of her best stories. When she’s not writing, there's a good chance you’ll find her playing outside, learning something new, or absorbed in some music.