Most of us don’t give much thought about how to pet a dog. You see the pup, you pet the pup—and hopefully, you get some appreciative tail wags in response.

While petting a dog might seem straightforward, there’s more to doing it right than you might imagine.

Whether you’re determining if your own four-legged friend truly appreciates the type of petting he’s getting or attempting to make new canine friends through petting, doing it right requires focus and a solid understanding of canine body language. Once you tune into the fur beneath your fingertips you can make petting a happy and calming experience for all.

When a dog enjoys petting, you know it. They’ll wag their tail and rear end loosely and often paw at you to keep going if you stop. But the surprising reality is that not all dogs love petting.

Some dogs that don’t enjoy touch make their preferences clear. If you try to reach for them, they duck their heads away or move just out of reach. However, because we don’t always correctly interpret what our dogs are telling us it takes focus to pick up on when a dog is subtly signaling that they don’t want petting.

For example, a dog that doesn’t like petting might tolerate touch but not ask for more when it’s over. Touch-resistant dogs might also offer a different behavior when you try to pet them, like grabbing a toy and trying to engage with you that way instead.

Whether it’s because of the dog’s general preferences or due to environmental stressors (like a dog that’s nervous in a veterinary waiting room), recognizing when a dog doesn’t want contact and honoring the request is the first step in creating a bond. 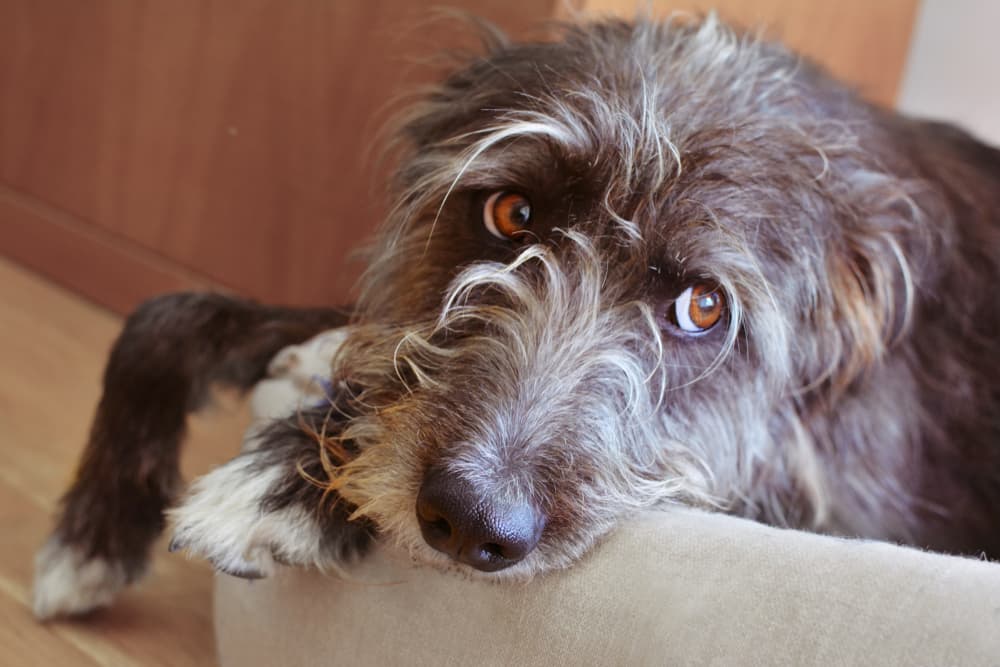 What might cause a dog to not like touch? Much like the way some people don’t like hugs or handshakes, some dogs are just wired to not appreciate petting in the traditional sense. Dogs that are bred to work independently of humans—like livestock guarding dogs—might also shy away from petting.

If a dog has previously suffered from abuse or had a bad experience in a former household, he may also be resistant to petting or take a longer time to warm up to your touch.

Just because a dog doesn’t enjoy petting doesn’t mean that they don’t like connecting with people. We can express affection for hands-off dogs in other ways, like hiking or playing together, or even just being physically present with them.

Best Places to Pet a Dog 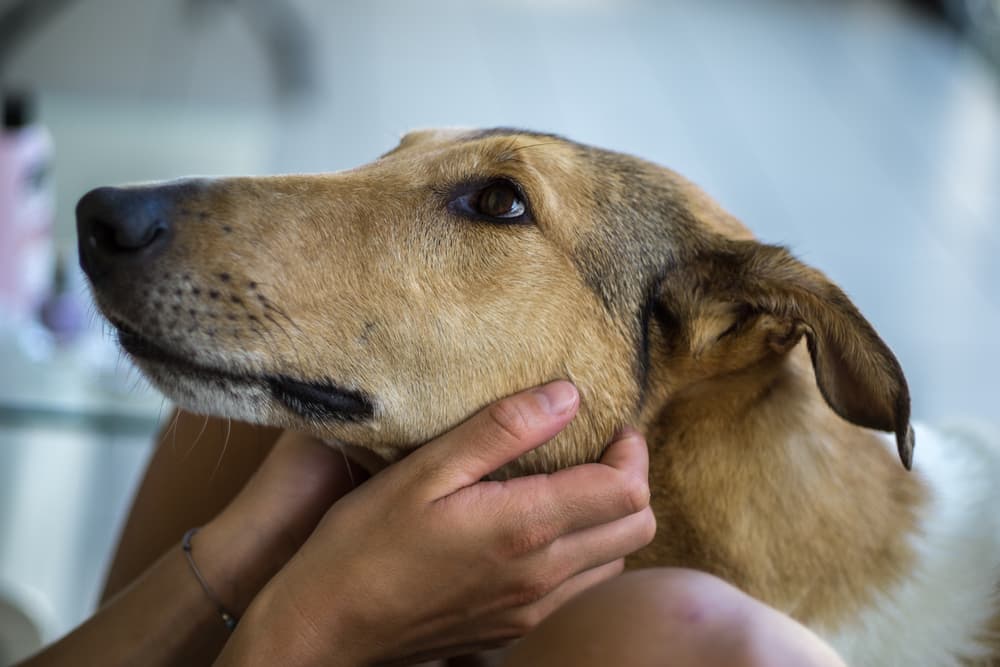 Every dog has preferences about how and where they enjoy being touched. For some it might be a nice scratch on the rear right above the base of the tail. For others, it’s a relaxing massage on those hard-working shoulders.

Pinpointing your dog’s favorite way to be touched is a combination of trying different locations and watching your pup for feedback as you touch. It might feel strange to pay close attention to a part of your relationship that feels so basic, but confirming your dog’s petting preferences is yet another way to show that you respect your dog’s wishes.

Most dogs enjoy being petted on these parts of the body:

If your dog is relaxed and rolls so that his belly is available, he might be asking for tummy rubs. But be aware that a nervous dog might expose the stomach as an appeasement gesture in times of stress.

Petting preferences can also be linked to a dog’s past. For example, dogs with a history of ear infections or problems might dislike hands anywhere near their head, while other dogs without similar baggage might enjoy a gentle massage along the edges of the ears.

Touch is a bonding activity that can also have therapeutic benefits if you pay attention to the topography of your dog’s body as you stroke. Not only is touch a stress reducer, pet parents who tune into their dogs while they pet are more likely to pick up on changes to their dog’s coat, skin and overall health.

How to Pet Your Dog 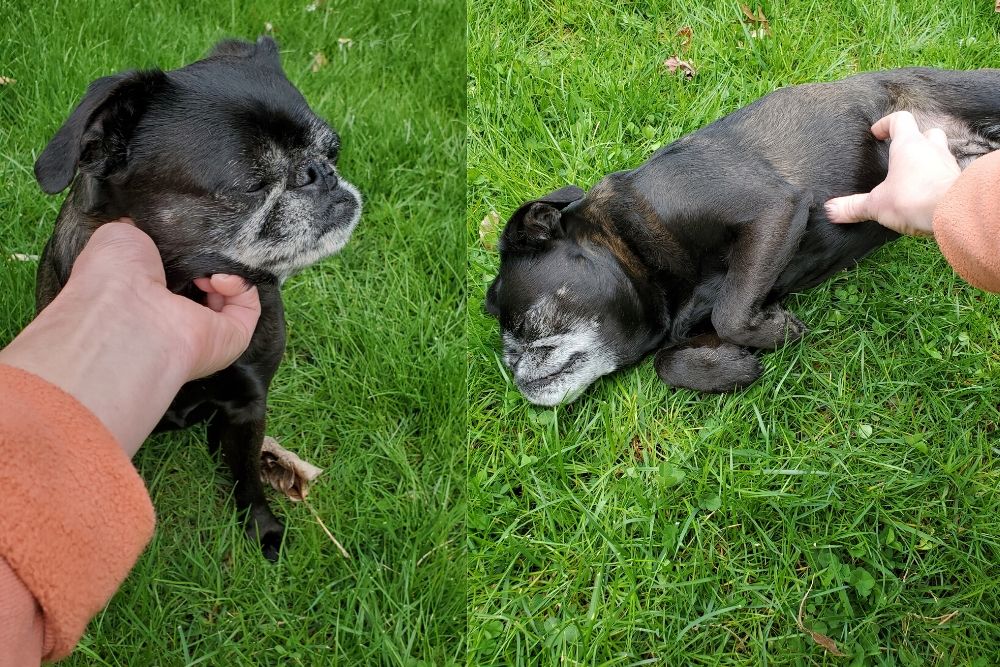 Obviously, the rules of engagement are more relaxed when petting your own dog versus one you’ve never met before, but it’s still important to pay attention to your own dog’s responses when you touch him.

Step One: Assess the Scenario

Even the most snuggly pup can turn his nose up to physical contact in stressful situations, like at the vet or when getting ready to enter the dog park. Always consider what’s going on around you when you get ready to pet. You’ll be more likely to get a “yes please” reaction if you’re chilling on the couch with your dog on a lazy Sunday than in a high-pressure scenario. 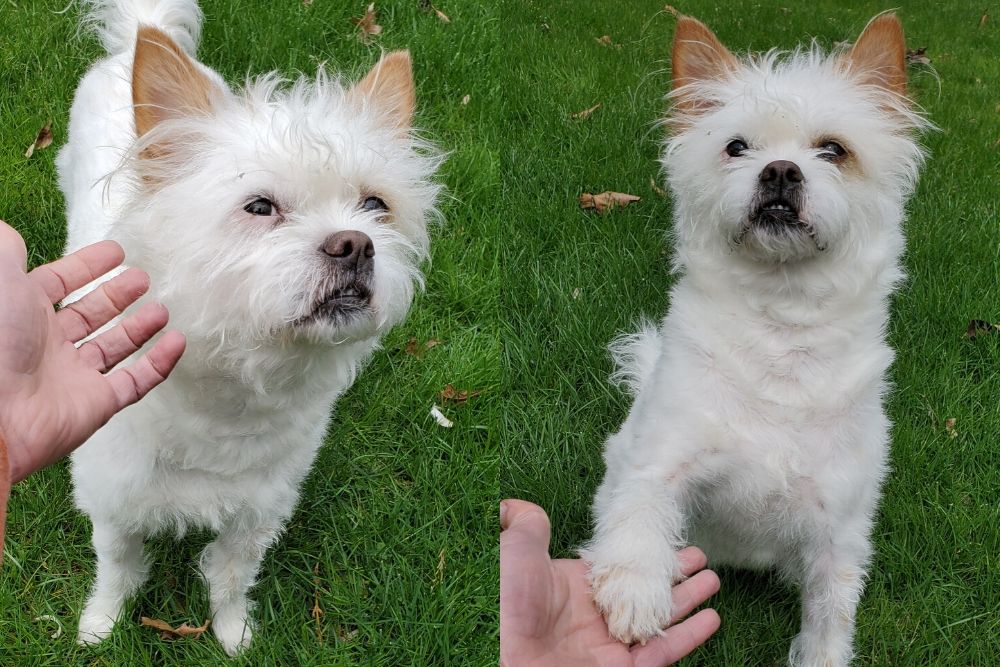 On the left: Dog pulling away from a pet. On the right: More please!

The most important part of petting your dog is learning to read what he’s saying as you do it, which will help you determine his petting location preferences. Your dog’s body language will clue you in as to whether you’re hitting the right spot, or if he’d like it a little lower and to the left please.

Watch for slow breathing, closed eyes, and moving in closer to you as you touch. If your dog licks around his muzzle frequently, yawns, or moves away, he’s probably not enjoying the contact.

Pet your dog for three to five seconds then stop and watch your dog’s reaction. Does he move closer to you or use his paw to swat at your hand for more? He’s enjoying your massage! If he doesn’t do anything to encourage additional contact or moves away, take a break and find a different way to connect with your dog.

How to Pet a Dog You Don’t Know 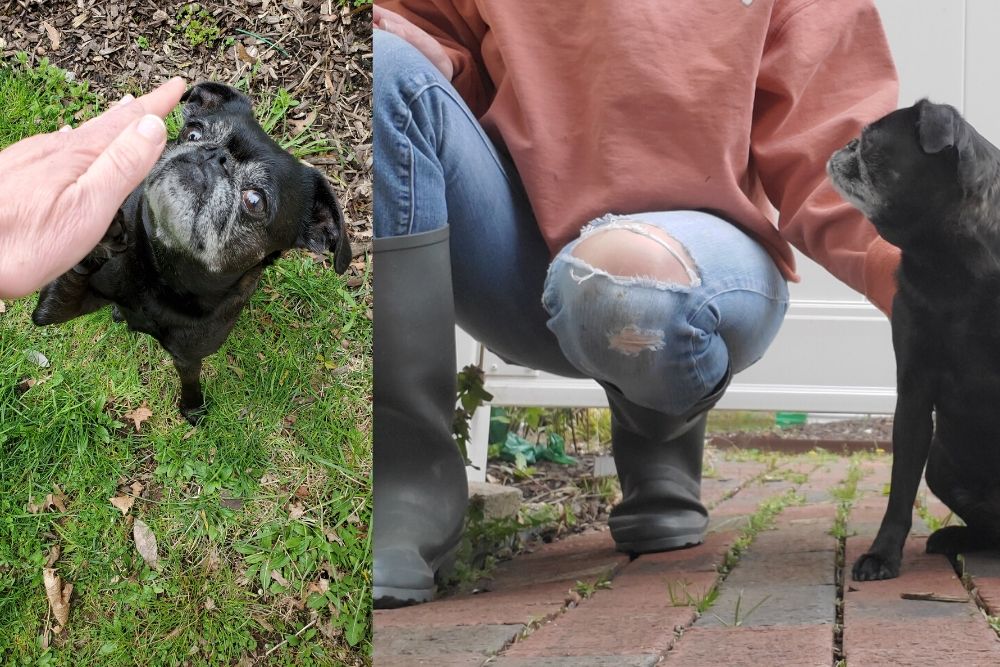 On the left: Don’t go overhead to try to tap a dog on the head. On the right: Crouch down and let a dog come to you—don’t force it.

Petting a dog that you’ve never met requires a more choreographed approach. It’s critical to let the dog lead the dance rather than making assumptions about the type of interaction he wants.

Step One: Ask for Permission

Check in with the pet parent to make sure it’s okay to try to connect with their dog and listen to their answer. Some pet parents are reluctant to say “no thanks” outright, so if they say something like, “he’s shy” or “he can be funny with people he doesn’t know” it’s best to say hello from a distance and move on.

Rushing over to an unknown pup is sure to startle him. Once you’ve gotten the okay from the dog’s pet parent, walk over slowly from the side rather than head-on. Watch the dog as you get closer.

Does his body language look welcoming, with a loose, waggy tail and happy, relaxed face? He’s saying yes! Or is he avoiding looking at you with his ears down and his tail tucked? That’s a definite “no thanks.”

For larger dogs, stand with your body sideways and for smaller pups, kneel facing sideways. It’s not necessary to extend your hand, as a dog’s keen sense of smell can pick up plenty of information about you even from a distance.

Wait for the dog to approach you and allow him to sniff. If the dog chooses to stay away, he’s not interested in connecting with you.

Step Four: Do the 3-Second Pet Test and Respect the Response

If the dog gets close to you, pet him gently on the shoulders for three seconds then stop. If he asks for more, like pawing at you or moving closer, you can keep it up. If the pup doesn’t make an obvious move for more physical contact say thanks and move on!

What NOT to Do When Petting a Dog

Dog petting etiquette is important, whether you’re reaching for your own dog or one that you meet while out on a walk.

Make sure to avoid the following dog-petting faux-pas:

We can get so caught up in our own enjoyment of petting a dog that we forget to focus on the recipient. Petting can be a wonderful stress reliever with health benefits for both pooch and person if we recognize that our dogs have petting preferences, and then honor those wishes.