Along cool, rocky shores throughout the world, you’ll find underwater forests growing tall and dense, just as forests do on land. These lush plant hubs are made up of sea kelp—a large brown algae that is believed to have first appeared more than 5 million years ago.

Its largest varieties can grow up to two feet in a single day, topping out at over 200 feet tall. But even at more modest sizes, kelp serves as both food and shelter for thousands of underwater organisms.

And as it turns out, once it’s harvested, dried, and processed, kelp can also help nourish your dog—as long as you’re taking some important precautions.

What is Sea Kelp?

Sometimes the terminology can get confusing, but here are the basics: sea kelp is a type of seaweed and seaweeds are a type of sea algae.

Of the 10,000 species of seaweed out there, kelp is one of the more widely available. According to the Food and Agriculture Organization, approximately 30 million tons of farmed seaweed were produced globally in 2016, and about 27 percent of that was kelp (1).

Kelp prefers to grow in cool, clear, shallow waters near rocky shorelines, which makes it most common in the Pacific Northwest and New England in the US, and in other countries around the world including Iceland, China, Japan, and Korea.

Like other plants, kelp is low in calories and packed with vitamins, minerals, and antioxidants. It’s especially high in both iodine and calcium, and in recent years, more people have been adding dried kelp to their soups and salads, blending it into smoothies, or sprinkling it on veggies and meat to infuse nutrients and salty flavor without adding excess sodium.

Holistic veterinarian Ruth Roberts noticed some animal nutritionists beginning to use kelp with dogs as far back as the 1990s, but it was still fairly rare at the time. Dr. Judy Morgan, also a holistic veterinarian, says she first bumped into commercial kelp products at the Global Pet Expo four or five years ago, and since then, kelp has quickly spread throughout the dog world.

Is Kelp Safe for Dogs? 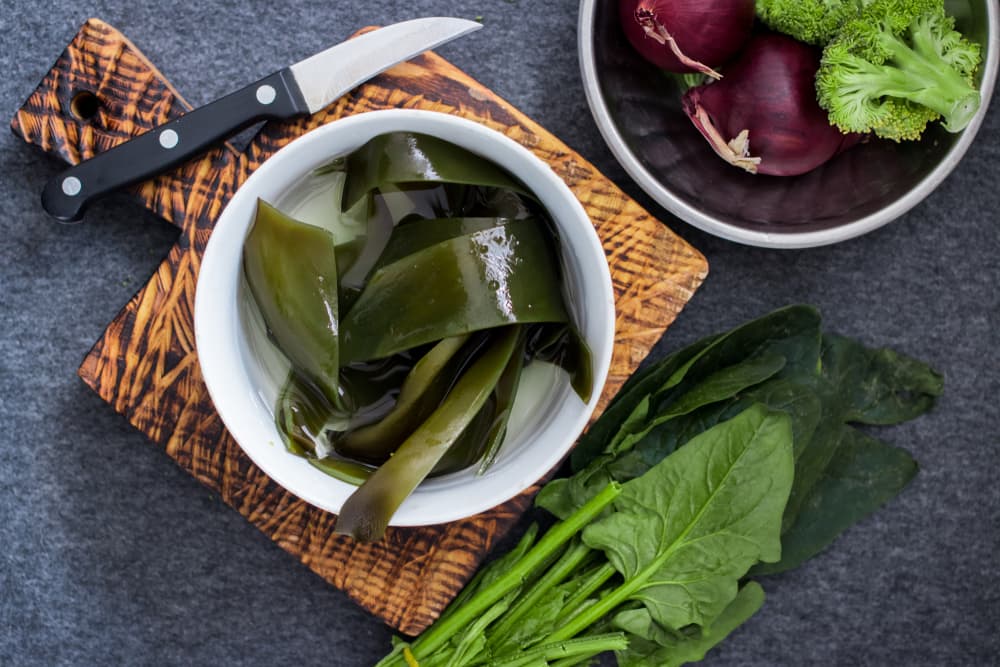 “Kelp, in general, is a great addition to the diet,” says Roberts. “It’s a fairly high-protein plant and has a lot of amino acids. There’s a lot of great nutrition in kelp.”

Morgan agrees. “Kelp is absolutely safe for dogs when used in correct amounts,” she says. But she warns against adding too much kelp to a commercial diet, since over supplementation can be dangerous.

Besides, says Morgan, many pet food companies are already using kelp to balance their formulations, and pet parents may see kelp as an ingredient on dog treat and dog food labels.

Benefits of Kelp for Dogs

About seven or eight years ago, Roberts started recommending “super small doses” of the Ascophyllan nodosum variety of kelp for its dental benefits. “It does seem to really help decrease the amount of tartar and calculus that forms on the teeth for both people and dogs and cats,” she says.

She notes that seaweeds can also support skin health—particularly in dogs with coat or nose pigment issues that are caused by low thyroid function.

In fact, the iodine found in kelp—and iodine’s relationship to thyroid function—is one of the main reasons people use kelp, according to Roberts. Iodine deficiency is one common cause of hypothyroidism, in dogs, which can disrupt heart rate, body temperature and, most notably, metabolism. Kelp may help boost a dog’s iodine levels and support thyroid function if dosed correctly.

But before you begin feeding your dog kelp, there are caveats you need to know.

Risks of Kelp for Dogs

“Used in small amounts on a regular basis, I think kelp is a great thing to add to dogs’ diets,” Roberts says. The problem is when pets get too much. While iodine is essential for healthy thyroid function, too much of it can induce hyperthyroidism—a condition in which the body overproduces thyroid hormone, causing unexpected weight loss and other health issues.

At even higher doses, iodine can have the opposite effect: suppressing thyroid function and leading to (or worsening) hypothyroidism—the very condition many people are trying to prevent or improve through kelp in the first place. The potential for too-high doses of iodine is “the one major downside of kelp,” Roberts says.

More generally, when it comes to kelp, “don’t believe all the claims that kelp will cure anything, repel fleas, or perform miracles,” Morgan warns.

How to Give Dogs Kelp 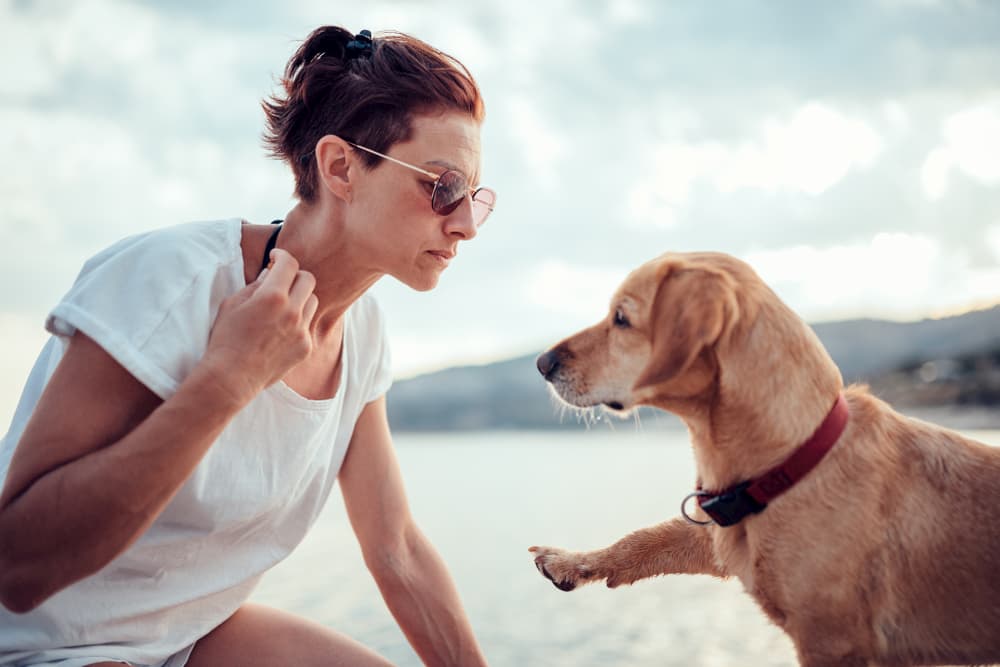 Kelp products for dogs are available as powder-filled capsules, soft chews, or straight powder in a bag. You’ll also see it as an ingredient in dog foods and dog treats.

But if you are very careful about serving size, Roberts says there is no reason you can’t feed human kelp products to your dog—and they’ll probably cost less, too.

If using a powder, Roberts recommends mixing it in with your pup’s food, especially if you feed your dog a veterinary-approved, home-cooked diet. “Most pets really like it,” she says.

The safest amount depends on your dog’s size. For larger dogs, Roberts says 1/4 teaspoon per day is “not a problem,” but don’t go any higher than that. For smaller dogs, she recommends half of that amount: 1/8 teaspoon.

If your dog already takes medication for hypothyroidism, Roberts says it’s essential to call your veterinarian before offering any kelp.

When you’re thinking about giving your dog kelp, you should be cautious about the concentration of iodine in your dog’s diet. Morgan notes that the Nutritional Research Council recommends about 220 micrograms of iodine for every 1,000 calories a dog eats. “If iodine is already present in a commercial food,” she says, “it is important to know how much is in there so you don’t give your pet too much iodine.”

Where to Buy Kelp for Dogs 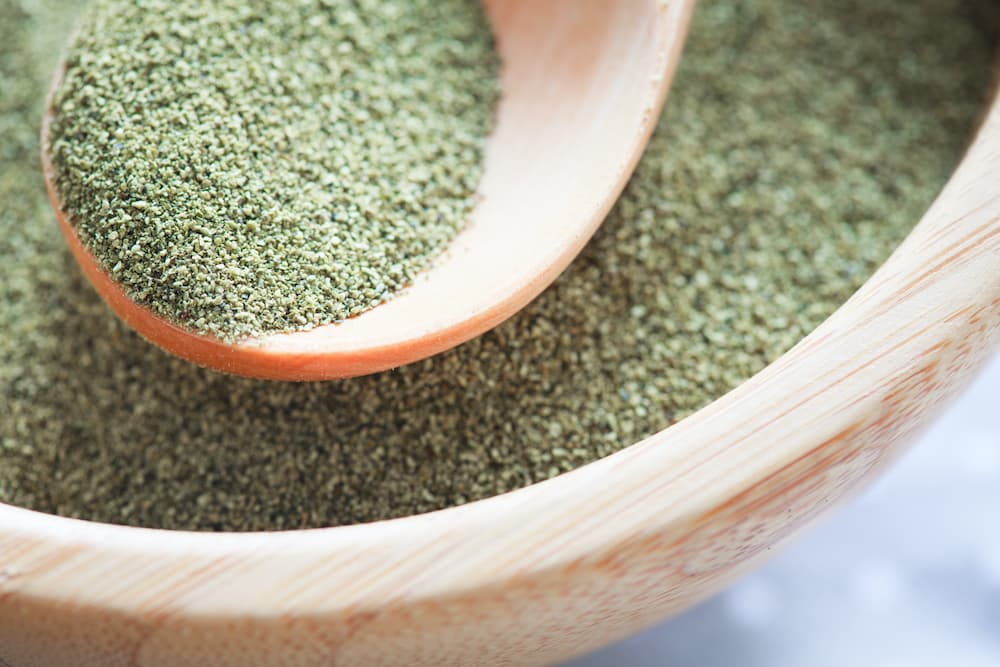 You can find human and pet kelp products almost everywhere—from pet stores and online health food shops to most grocery stores. Roberts recommends seeking out powder that is “the least processed possible” (steer clear of added oils or salts) and looking for labels that are certified organic.

She also reiterates that many kelp products for pets are simply “human products packaged in a more expensive version”—so go ahead and share that bag of kelp powder with your pup. Just be careful how much of it you’re sharing.