There are so many dog food brands and formulas on the market that—at this point—picking out the right food for your pup can feel more complicated than shopping for your own meals. Should you go with grain-free? Non-GMO? Organic? Kibble or wet? High-protein or carb-friendly?

What Is Freeze-Dried Dog Food? 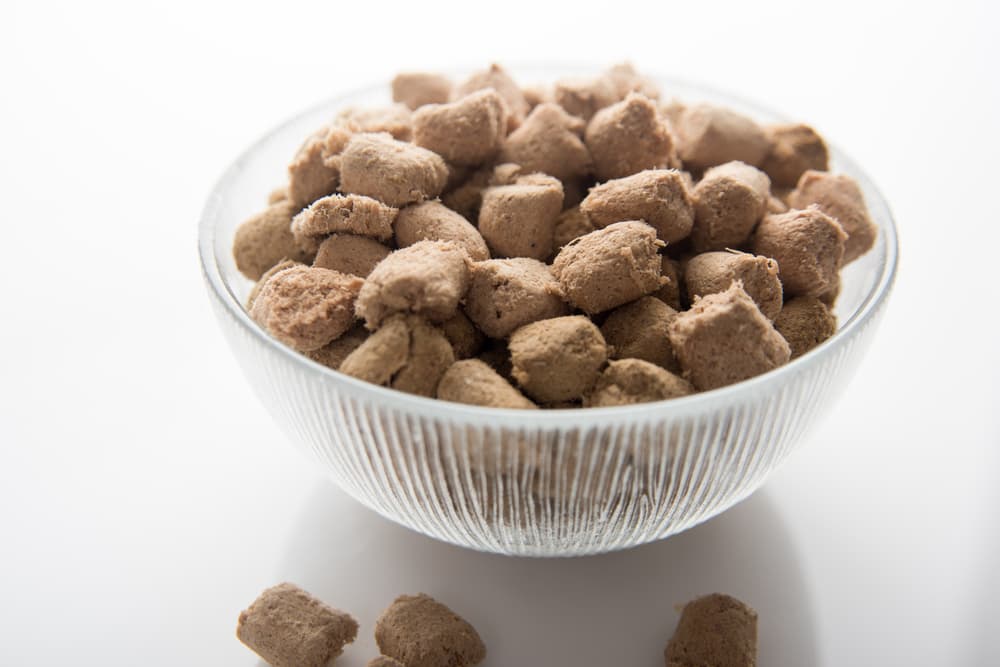 Humans have been freeze-drying food for a long time. Although for many of us, the prime example is still that “astronaut ice cream” you find in science museum gift shops, the global freeze-dried food market is expected to reach $85.3 billion by 2024 (2)—and part of that number comes from the rise of freeze-dried pet foods (3).

Like the human version, freeze-dried dog food has had all its moisture sucked out through freezing temperatures and a multi-step drying process. The result is a bone-dry, shelf-stable product that can last for years and be plumped back up by simply adding water.

In the case of freeze-dried dog foods, “what you’re getting is a different presentation of raw dog food,” says holistic veterinarian Dr. Ruth Roberts. But unlike fresh raw meat, some freeze-dried raw dog foods also go through high-pressure processing (HPP), a pasteurization process used to decrease quantities of bacteria such as Listeria, Salmonella, and E. coli.

Even after HPP, freeze-dried dog food is still considered a raw food. “For pet owners who want to feed raw but are concerned about bacteria, [freeze-dried] is a great way to go,” Roberts says. 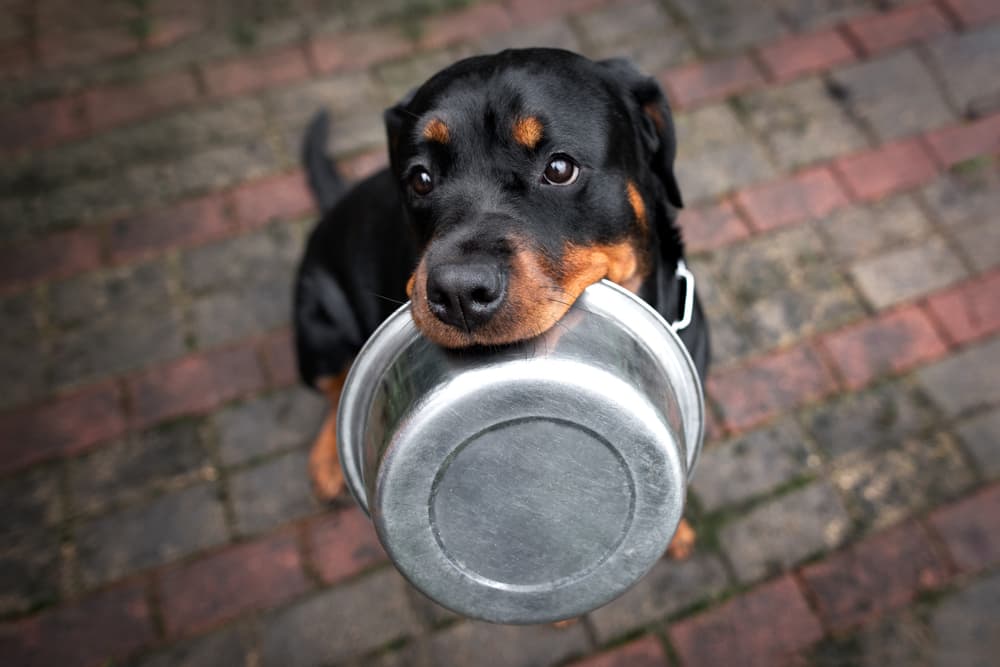 Freeze-drying is a way to dehydrate dog food, but not all dehydrated dog food is freeze-dried. “Often dehydrated food is one where the water is removed using warm air,” rather than the cold-temperature process used to freeze-dry, says Dr. Joe Bartges, a board-certified veterinary nutritionist and professor at The University of Georgia.

Just like other dog foods, freeze-dried products come in a number of formulations, from high-protein, to high-fat/moderate-protein, to varieties more similar to traditional kibble that include carbs like potatoes and legumes. Roberts notes that in any of these freeze-dried varieties, the proteins are still considered raw, and in some cases the starches are, too.

How Is Freeze-Dried Dog Food Made? 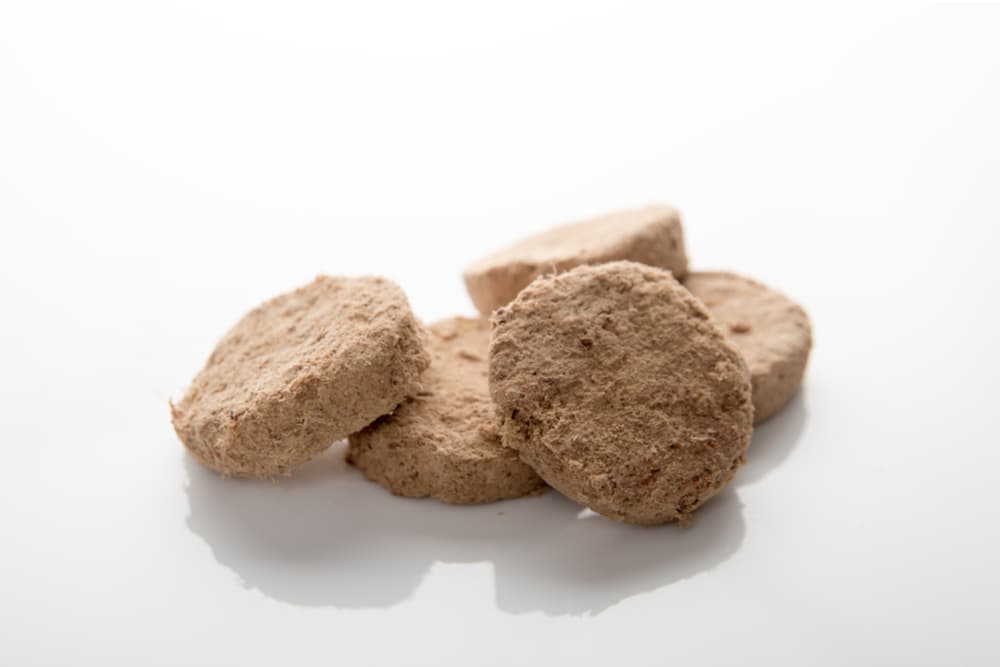 There are several steps to the freeze-drying process—a technique so old it’s been traced all the way back to 1200 A.D, when Incas freeze-dried their potatoes.

In the modern version, fresh food is first frozen solid. Then it goes into a vacuum chamber that evaporates nearly all of the solid water (ice). A second drying phase zaps away any lingering water molecules. By the end, roughly 97 percent of the food’s moisture has been sucked out, but many of its nutrients remain.

The Benefits of Freeze-Dried Dog Food 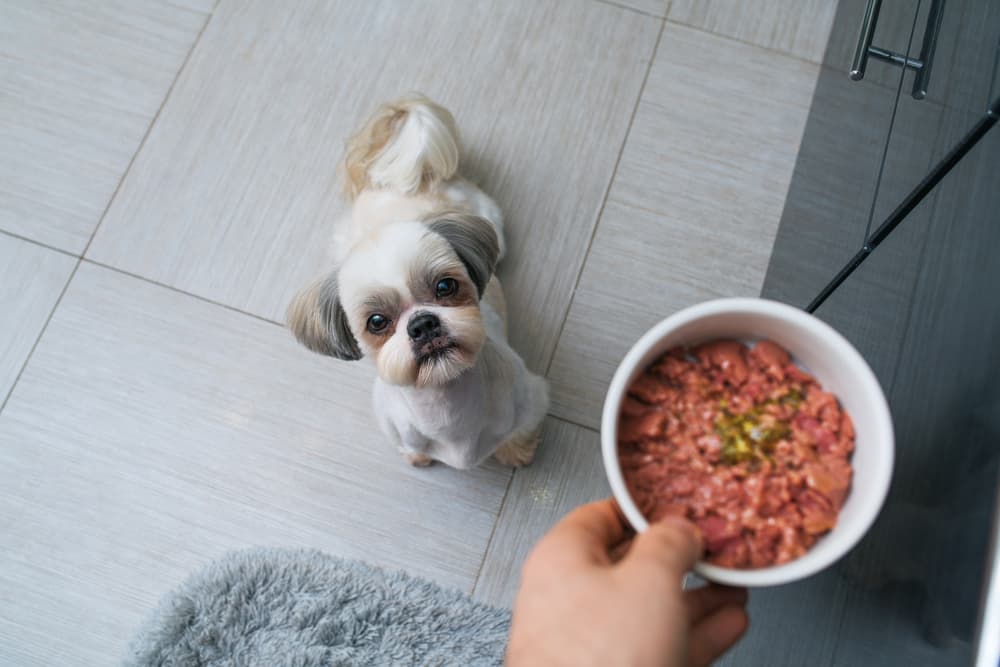 For pet parents who want to feed their dogs a raw diet but worry about finding, handling, and preparing fresh raw meat themselves, freeze-dried food can be a fast and simple alternative. And unlike plain raw meat, “all of the commercially available [freeze-dried] formulas are going to be complete and balanced for all life stages,” Roberts says—as long as you make sure they’ve been formulated to meet the standards established by the Association of American Feed Control Officials (AAFCO).

Pet parents also like that it’s easy to find high-quality, organic ingredients—including grass-fed meats—in freeze-dried dog foods. Processing and additives are usually minimal, too, and even picky eaters tend to like the formulas.

“For people who like the idea of feeding whole foods but don’t want to cook or make their own, it’s a good option,” Roberts says. She notes that freeze-dried foods may be especially helpful for people who travel with their pets, since the drying process condenses fresh food down into a much smaller, lighter, and shelf-stable form. It also frees up valuable freezer and fridge space, since it lives in pantry-friendly packages. 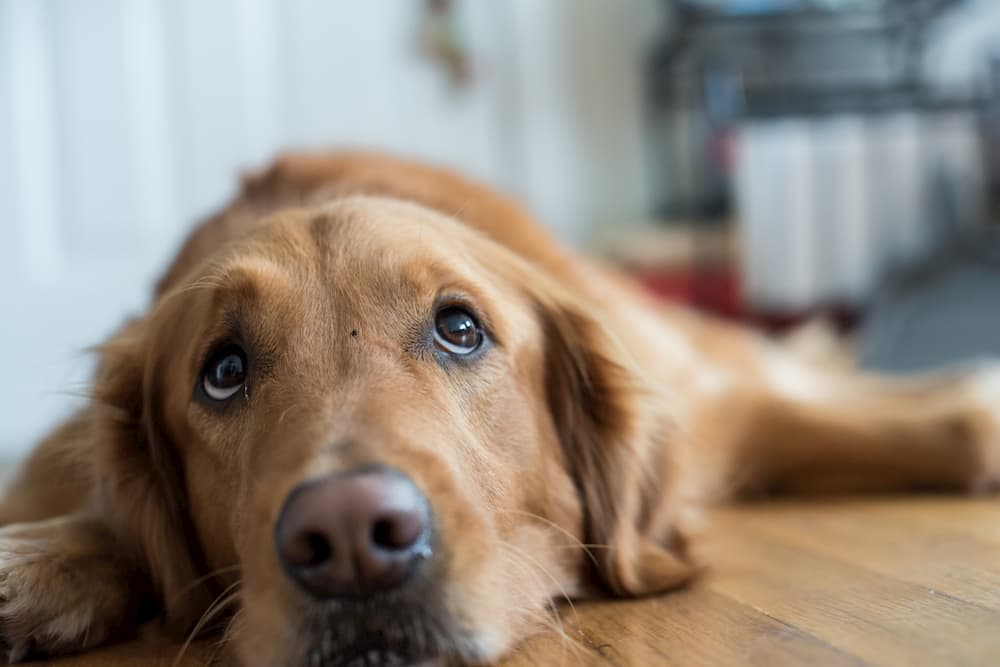 Roberts has two main concerns about freeze-dried dog food. First, when you take food out of its natural state—in this case, by drying it out and rehydrating it later—it is “never quite as easy to digest as it is in its original form,” she says. Second, it’s “hideously expensive,” she adds, “so the convenience comes at a cost.”

According to Nielsen data, freeze-dried pet food clocks in, on average, at $33 per pound, compared to $10 or $11 for air-dried or dehydrated pet foods (4).

Many veterinarians also worry about illness-causing bacteria. “Freeze-drying alone, without a prior heating/cooking step, is not an effective way to eliminate microbial pathogens” like Salmonella, E. coli and Listeria, says veterinary nutritionist Dr. Megan Shepherd, who is also a clinical assistant professor of nutrition at Virginia-Maryland College of Veterinary Medicine at Virginia Tech. “Therefore, I recommend avoiding raw and freeze-dried animal tissue-based products, unless the manufacturer can confirm that the finished product is pathogen-free.”

AAFCO, which sets standards for pet foods in the U.S., offers a similar warning on its website, noting that most nutritionally complete pet foods have been heat-treated during manufacturing to prevent microbial contamination. AAFCO further warns that any raw foods you’re feeding your pup could put humans in the house at risk for illness—especially children, elderly people, or anyone with a compromised immune system. And the same bacteria can make your dog sick, too. 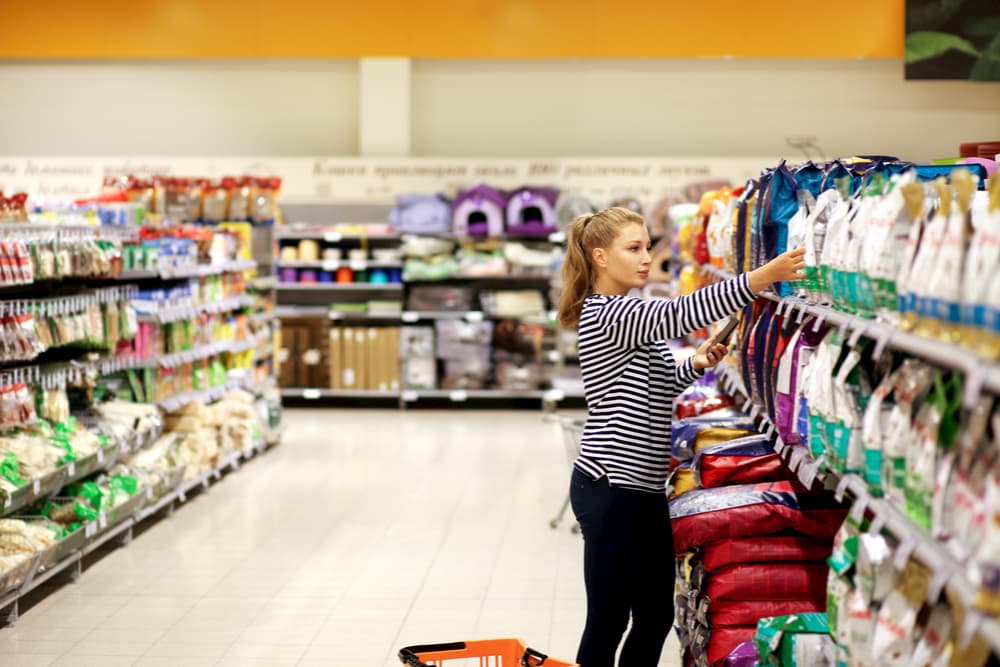 With all that in mind, the best freeze-dried dog food depends on what your pet likes, what you feel safe feeding her, and what areas of her diet you’re planning to use it for.

If you’re seeking food that’s explicitly been high-pressure processed in the pasteurization process outlined earlier, Primal uses the process for their raw poultry products, including the grain- and gluten-free freeze-dried nuggets that it also markets as complete and balanced. Stella & Chewy’s uses HPP for its freeze-dried products, too, as do Vital Essentials Raw, Northwest Naturals, and a growing list of others.

How to Feed Your Dog Freeze-Dried Dog Food 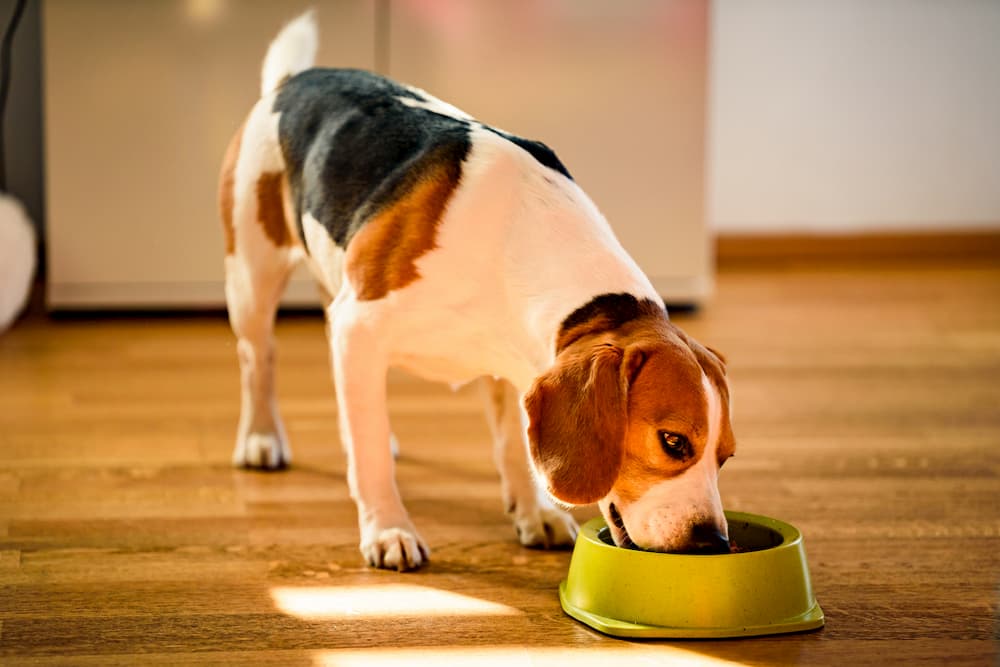 You’ll find freeze-dried dog food in any number of forms, from dinner patties to food toppers to bite-sized nibbles. It can become your dog’s sole diet, be mixed in or sprinkled on top of her regular food, or even be doled out as quick treats.

Always be sure to check the specific instructions listed on the food you choose. Many formulas are intended to be served as-is—which is especially convenient if you’re using them for treats—but some must be rehydrated by crumbling into warm water. Adding water makes freeze-dried food bulkier and more filling, and is especially important for dogs who don’t drink much water on their own.

Where to Buy Freeze-Dried Dog Food