Poison ivy is the common name given to a plant with which many residents of North America are all too familiar. When brushing against it, people can develop extreme itchiness and red rashes that cause discomfort and pain.

But are our dogs also susceptible to the effects of this troublesome plant? Let’s dive in further to explore if poison ivy impacts our dogs.

What is Poison Ivy? 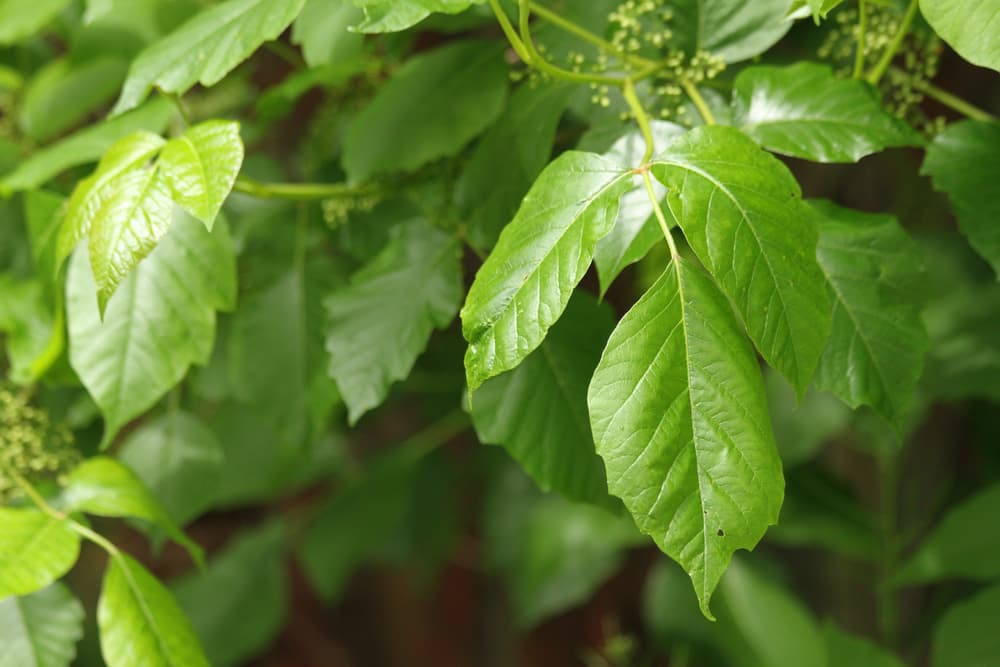 Technically, poison ivy isn’t really an ivy. Ivies are from the genus of plants called Hedera and poison ivy is a Toxicodendron. It does share some ivy characteristics though, as it can be a trailing or climbing vine, like ivy. Poison ivy can also grow as a shrub up to nearly 4 feet tall.

Poison ivy got its name from an oil in the plant’s sap, urushiol, which can cause a local allergic reaction on susceptible skin. Many animals are completely immune, with native animals commonly eating the plant and birds consuming the seeds. People, however, are quite susceptible, and contact with poison ivy causes an itchy, irritating, and sometimes even painful contact dermatitis or rash.

Can Dogs Get Poison Ivy? 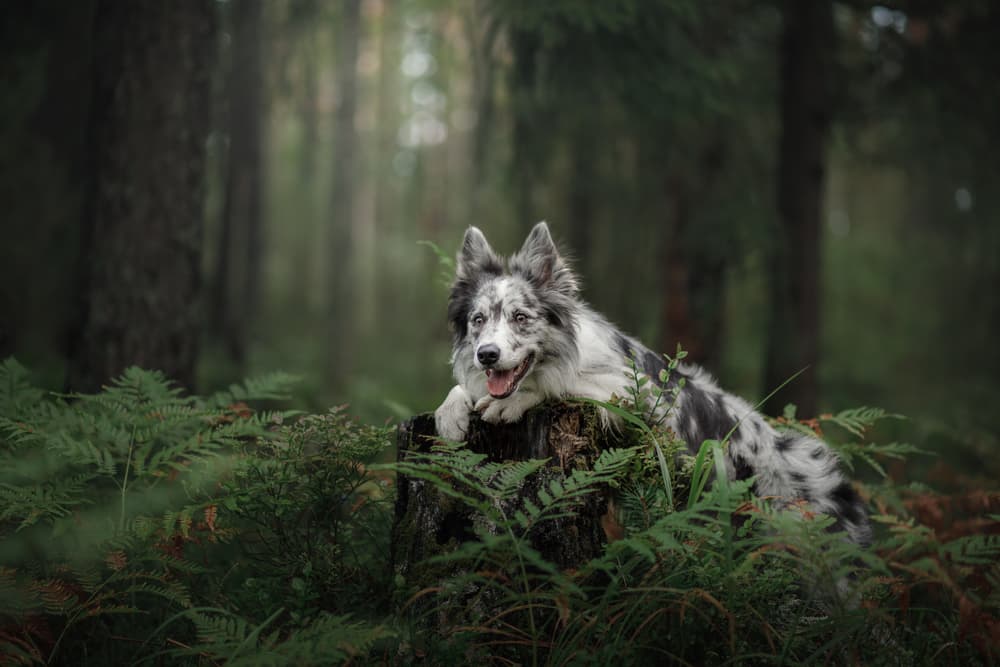 Dogs don’t react to poison ivy like people do. They don’t get a rash from poison ivy and it doesn’t seem to affect them in any way. To date, there are no reported cases of contact dermatitis associated with poison ivy in dogs, so it appears that dogs are not allergic to poison ivy.

Similarly, there doesn’t appear to be any adverse effects for dogs eating poison ivy either. However, dogs can carry the oils on their fur, which can then cause an allergic reaction to any person who touches them.

Just because dogs don’t react to poison ivy doesn’t mean they are completely immune to contact dermatitis from contact with other poisonous plants. More common causes of contact dermatitis in dogs are plants like Trachelospermum asiaticum (Asiatic jasmine) and plants of the Tradescantia species.

What Causes Poison Ivy on Dogs? 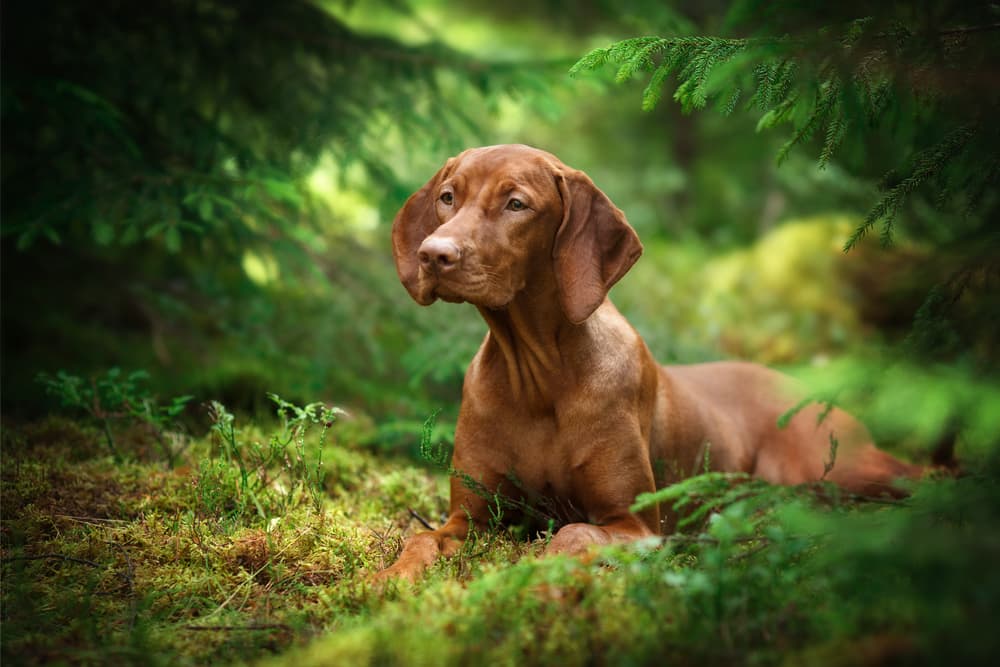 The component of poison ivy that causes an allergic reaction for people is an oil in the sap that contains the poison urushiol. This reaction is an immune response known as type IV or delayed hypersensitivity, where the urushiol molecule acts as a hapten and binds to proteins in the skin, causing cell-mediated inflammation and dermatitis.

While dogs don’t react to this poison, they can pass it on to people as the oil can stay on their fur for hours after contact with the plant. Dogs who spend time outside and in wooded areas may come in contact with poison ivy and bring the oil into the house.

Symptoms of Poison Ivy on Dogs 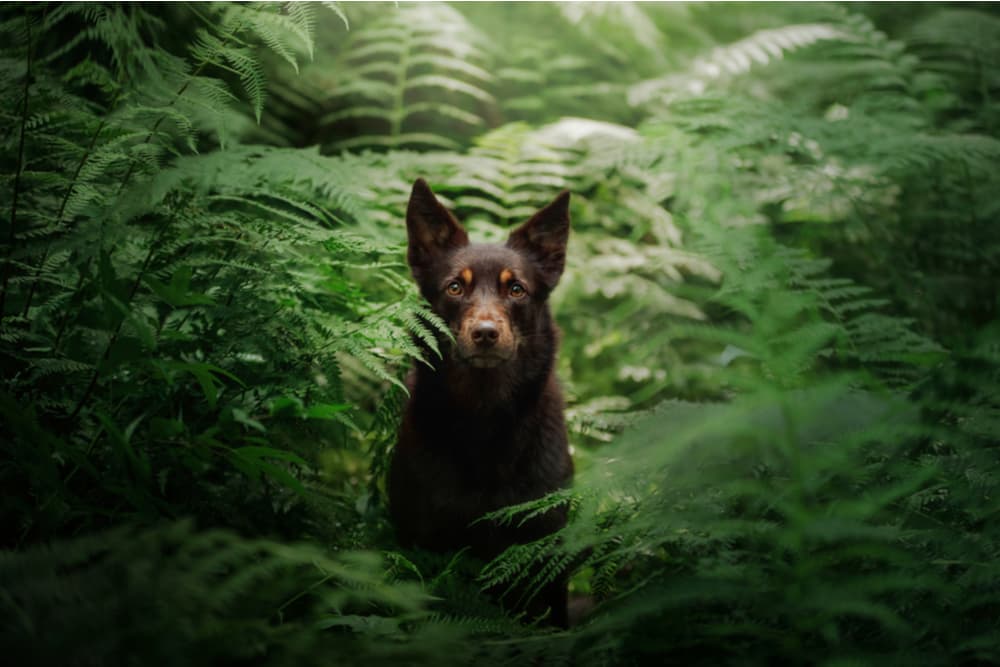 As previously mentioned, dogs don’t have any reaction to poison ivy, so contact with the plant does not produce any specific symptoms.

However, symptoms of contact dermatitis from other poisonous plants and allergens can look very much like ours and include:

These symptoms of contact dermatitis usually appear on areas of a dog’s body with little to no hair. 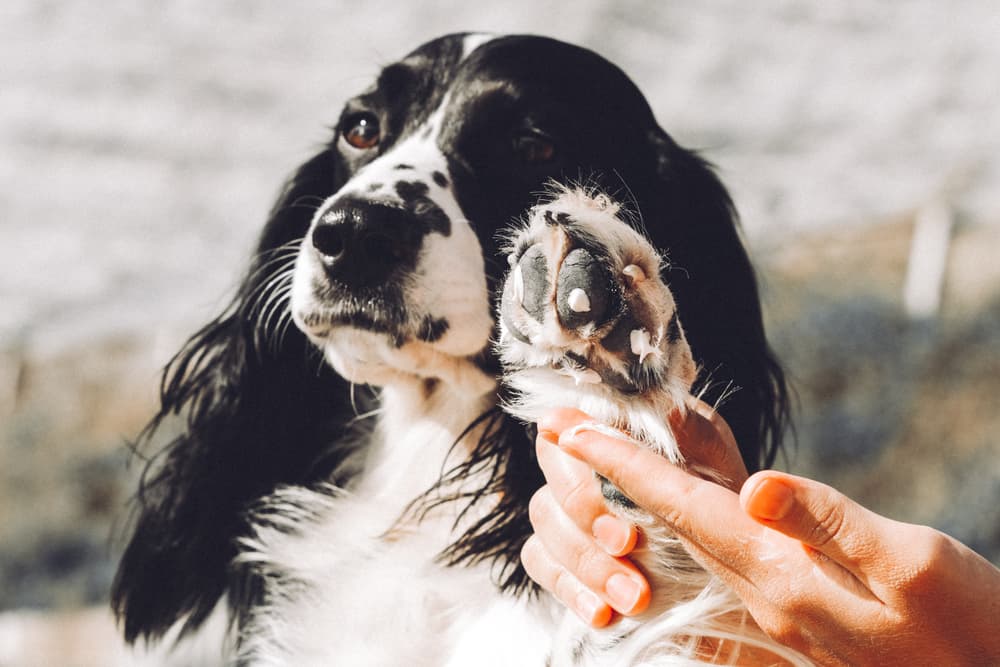 Since, poison ivy doesn’t cause any reactions for dogs, veterinarians do not diagnose poison ivy toxicity in our canine companions.

However, to diagnose contact dermatitis in dogs, veterinarians typically make a diagnosis of exclusion—meaning other potential causes for the reaction are ruled out. If there is a history of recent exposure to a known toxic plant, this can help determine the cause of the symptoms.

During physical examination, the obvious signs of reddened skin, trauma from excessive scratching, and papules or welts may indicate the location of the exposure—though this can be misleading and hard to differentiate from other allergic reactions, such as a dietary allergy.

Contact dermatitis is predominantly limited to hairless or sparsely haired regions of the dog’s body, including their chest and belly, their paw pads and between their toes, their muzzle, the inner surface of their ears, and under their tail.

A thorough history and ruling out of other causes of the symptoms is the most important step in diagnosing contact dermatitis. Other tests such as skin scrapings and biopsies of the affected skin aren’t often very useful, as they simply show dermatitis but give little indication of the underlying cause.

How to Treat Poison Ivy on Dogs 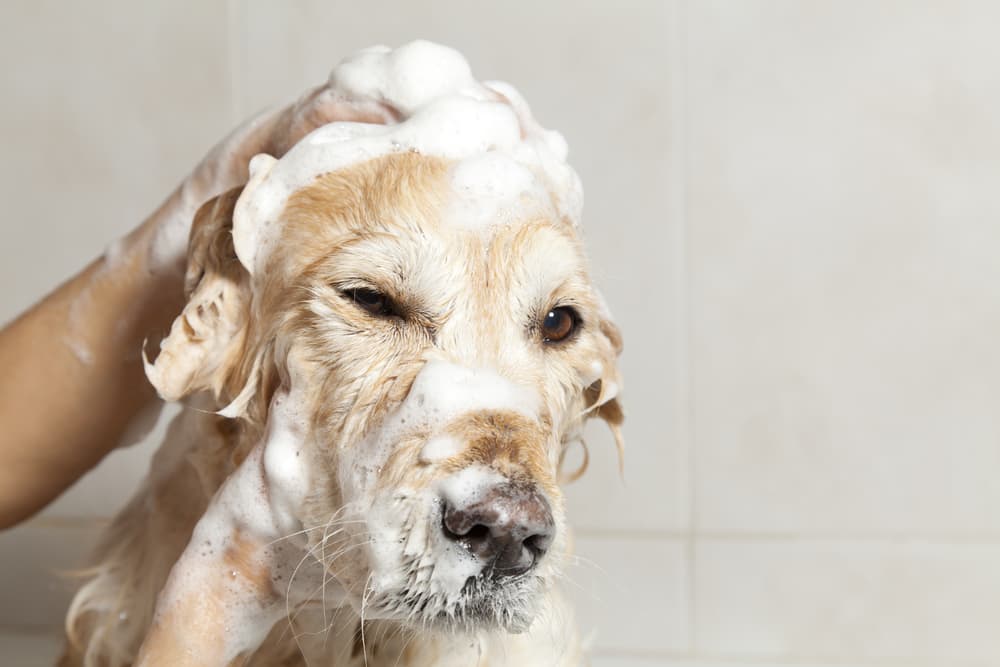 A sudsy bath using a pet-friendly shampoo can remove the toxic oil from a dog’s hair and prevent it from being transmitted to a susceptible person. Though the act of lathering up the dog should be sufficient to remove the toxin from human skin as well, it is prudent to wear gloves if a person with particularly sensitive skin is washing the dog. It only takes about 10 minutes for the toxin to penetrate through skin, so hand washing within that time is necessary to prevent a reaction.

For dogs who have been exposed to a toxic plant to which they are susceptible, the allergic reaction can be treated symptomatically with topical glucocorticoid (a type of corticosteroid). For cases with more generalized lesions, oral glucocorticoids may be required as well.

It is important that the dog is not able to lick the topical treatment. To prevent licking, the treated area must either be covered or an Elizabethan collar put on the dog to prevent them from bothering the area.

Dogs with chronic allergic contact dermatitis may develop secondary bacterial infections as the skin barrier has been disturbed, and topical and/or systemic (whole-body) antimicrobial therapies may be necessary. This would require a veterinary examination and prescription.

How to Prevent Dogs from Getting Poison Ivy 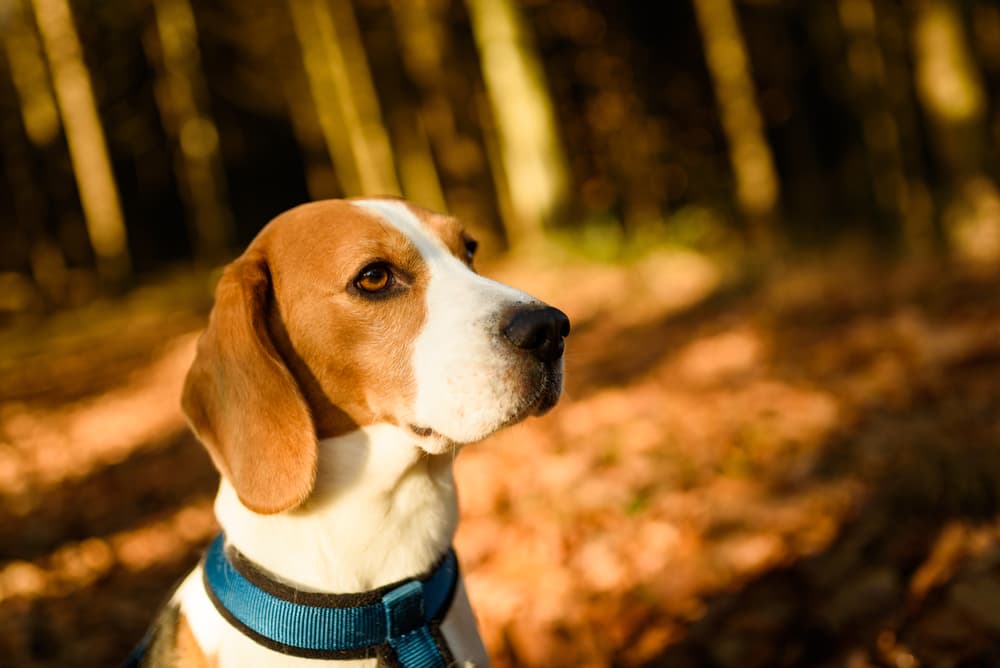 Even though dogs are not susceptible to the toxin in poison ivy, preventing exposure to the plant is a good idea, because dogs can easily transmit the toxic oil from the plant to their person.

In areas where poison ivy is seen or known to grow, keep dogs out of the undergrowth. Even dead poison ivy still has urushiol in it and can cause an allergic reaction if it or it’s sap comes in contact with a person’s skin. Unless the plant is buried under snow in winter, it’s safest just to steer clear of the area.

If contact is suspected, give your dog a bath when they get home to remove the oil from their hair and reduce the risk of transmission to people.

Dr. Dodd specializes in companion animal nutrition. Her particular passion is educating pet parents about alternative diets, particularly plant-based pet foods. Quite literally, we are what we eat, and we have an incredible opportunity to promote pet health with what we put in their bowls!