Dogs live in the same environments we do and also eat many of the same foods we do. Studies have evaluated the potential link between human and canine cancers—and it turns out, there are similarities (1)(2)(3).

Approximately 1 in 4 dogs will develop cancer in their lifetimes (4). Lung cancer in people is one of the leading causes of death in North America. In contrast, lung cancer in pets represents only about 1 percent of tumors and is considered rare compared to other cancers in pets.

Although lung cancer in dogs is not as common as other canine cancers, it’s important to understand the signs, the disease progression, and the available treatment options to help you make the best-informed decision for your beloved family member.

What is Lung Cancer?

When we think about cancer, most of us think of lumps or bumps that develop on the skin or other internal organs. This is absolutely correct. The reason these lumps and bumps form is due to the abnormal growth and replication of cells.

Lung cancer in dogs is caused by this abnormal growth of cancerous cells.

As these masses continue to grow uncontrollably (often at undetermined and varying rates), they may also begin to spread (metastasize) to other locations via the blood or lymphatic system.

The most common lung tumor seen in dogs in call a primary lung carcinoma and this arises from the tissues within the lung. This tumor tends to grow as a large, single, and solitary mass, but may spread within the lungs, to local lymph nodes, or even bone.

Other lung tumors in dogs may include a primary lung histiocytic sarcoma. This is a term to describe a tumor of the histiocytes (a form of white blood cell) which may manifest as a single tumor in the lungs. This is considered a tumor with high-spread potential, most often to other parts of the lung, lymph nodes, and other internal organs.

Symptoms of Lung Cancer in Dogs 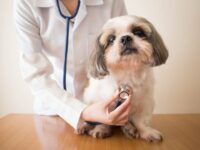 In many cases, lung tumors are actually found by chance. At the beginning stages of lung cancer in dogs, many show no clinical signs or vague clinical signs attributable to the disease.

However, in other cases, as the mass(es) continues to grow or spread within the lungs or other locations, clinical signs may manifest.

The tumor may also spread to the bone and cause destruction. This can cause a high degree of discomfort and weaken the bone to a state where it can fracture. Lameness or back pain may be observed in dogs, depending on the bone involved.

What Causes of Lung Cancer in Dogs?

In people, chronic airway irritation via asbestos exposure, smoking, or exposure to pollution may lead to the development of lung cancers.

Causes for histiocytic sarcomas that develop in the lungs are less well defined in scientific literature. However, certain breeds such as Bernese Mountain Dogs, flat-coated Retrievers, and Rottweilers are generally more predisposed to these tumors due to commonly observed genetic mutations. 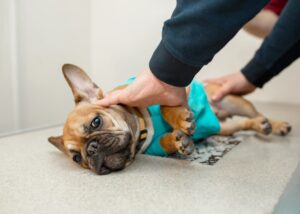 The diagnosis of a cancerous lung tumor in dogs is most often seen via chest X-rays. A physical examination is always important to determine if there are any other masses on the skin, rectum, oral cavity, or other locations on a dog’s body. Pain may be detected on physical examination that could indicate a bony lesion and radiographs of this area may be recommended.

Ultimately, X-rays are a preliminary evaluation of the lungs and three-views should be obtained. This helps create a somewhat 3-D view of the chest cavity. A mass may be visible on the left and top views, but not the right, so, three views are important.

Abdominal ultrasound is always recommended as a general staging measure. This allows your veterinarian or veterinary specialist to determine if there are any other masses or abnormalities that could have contributed to the development of a lung lesion. Bloodwork and urine tests are also recommended as a baseline measure.

If the lesion is questionable, a CT scan may be recommended. This could involve a scan of just the chest cavity or involve the whole body. This is one of the more advanced ways to evaluate lung masses, and is usually required for surgical planning. The CT scan allows veterinary specialists to evaluate other lung lobes, detect smaller lesions that may not have shown up on the X-rays, and evaluate a dog’s lymph nodes.

When determining what type of tumor your pet has, the veterinary specialist may recommend an ultrasound-guided aspirate, a type of biopsy. If the mass is located near the edge of the lung, it may be safer to use the ultrasound to guide a needle directly into the mass to sample the cells (called cytology) and aid with a diagnosis.

Is Lung Cancer in Dogs Treatable? 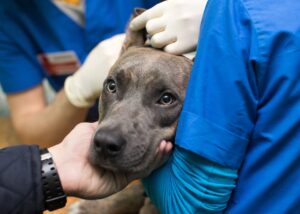 Lung cancer in dogs has many treatment options available, especially when there is a single and solitary mass in the lungs. Even in the metastatic (spread) disease setting, pet parents have options.

Surgery is by far the mainstay of treatment for dogs with lung carcinoma or histiocytic sarcoma of the lungs, especially with a single mass. This usually involves a lung lobectomy. In this procedure, the chest cavity is opened and the mass, along with the portion of the affected lung lobe is removed.

With advancements in human and veterinary surgical equipment, depending on the size of the mass (and patient) some surgeries can be performed thoracoscopically. This means that smaller incisions are made, and a camera as well as other tools, are inserted into the chest cavity and the mass is retrieved without opening the chest cavity more invasively. This surgery is only performed by a board-certified veterinary surgeon, and certain patient (and tumor) criteria need to be met.

Chemotherapy for Lung Cancer in Dogs

If surgery cannot be performed or is not elected for, other therapies such as chemotherapy may be considered. Chemotherapy in pets is very different than in people. Quality of life is the primary concern.

Many of these side effects are short lived and treatable at home. The other 70 percent of dogs have little-to-no side effects following chemotherapy treatment.

A combination of surgery and chemotherapy may be recommended and should be discussed with your veterinary oncologist.

Additionally, in cases where spread of the cancer is observed and surgery is not recommended, other medical therapies with targeted agents such as Palladia (Toceranib Phosphate)—an anticancer drug for dogs—can be considered.

In cases of histiocytic sarcoma, specifically, surgery remains the mainstay of therapy but is always followed with medical therapy (ie. chemotherapy). In cases where surgery cannot be performed (or again, overt spread) chemotherapy on its own may be considered.

The prognosis for dogs with lung carcinoma is generally good for single and solitary lesions that can be surgically removed. However, several factors such as size, grade (how aggressive it looks under the microscope), lymph node involvement, and clinical signs at the time of diagnosis may alter the prognosis.

The median survival times range anywhere from just under one year to over two years with adequate control. This should be discussed with your oncologist.

We have much more limited information on primary lung histiocytic sarcomas. One study evaluated the disease course in 37 dogs and reported a median survival time of just over one year when treated aggressively with surgery and chemotherapy (5).

It is important to remember that all dogs respond differently to treatment and how tumors respond to treatment also vary. Both of these factors affect a dog’s survival rate and life expectancy.

Costs for procedures range from institution to institution, but the more advanced and specialty procedures are expensive. More often than not, chemotherapy is performed at a specialty facility with a board-certified veterinary oncologist, but this can be discussed with your veterinarian.

Unfortunately, we cannot prevent any type of cancer in dogs. However, routine physical examinations and close monitoring of your pet for any clinical signs is always important.

You should speak with your veterinarian if you have any concerns. Given the complexity of lung cancer cases, referral to a veterinary specialty hospital for consultation with a veterinary oncologist and surgeon are recommended.