Hydrocephalus is an uncommon neurological disorder occurring when the brain is put under severe pressure due to a build-up of fluid. It can be present from birth, or affect adult dogs as a complication of several diseases.

Hydrocephalus is known to affect all species with varying frequency, and is more common in dogs than most—although still fairly rare.

Hydrocephalus literally translates as water on the brain. But the fluid is not actually water—it refers to cerebro-spinal fluid (CSF), which coats the spinal cord and parts of the brain. In hydrocephalus, this fluid is unable to drain away properly and increases pressure on the brain.

There are two types of hydrocephalus in dogs:

Congenital hydrocephalus occurs in puppies, it’s something they’re born with and is likely due to a problem during fetal growth.

Acquired hydrocephalus (which may also be caused secondary hydrocephalus or obstructive hydrocephalus) occurs in older animals, when inflammation, infections, or tumors grow and block the outflow of the CSF. A tumor of the brain is the most common cause of hydrocephalus in adult dogs.

What Causes Hydrocephalus in Dogs? 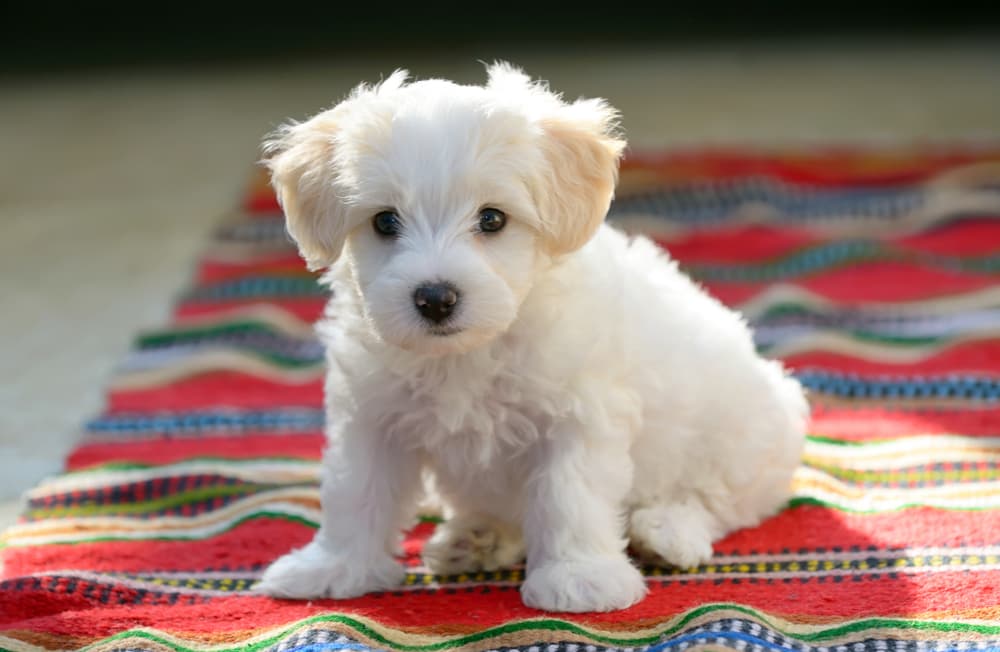 Congenital hydrocephalus is more common in small breed dogs, particularly in brachycephalic (short-faced) breeds and those with a domed head.

The most common breeds to be affected are:

It is thought that the breeding of these miniature dogs with their small heads has changed the skeleton faster than the soft tissues inside, resulting in a brain that is too small for the skull (1). This means that the skull itself is blocking the outflow of CSF.

Congenital hydrocephalus is a genetic defect, and affected puppies, and their littermates and parents, should not be bred.

Secondary hydrocephalus in dogs (acquired hydrocephalus) can occur for a number of reasons. There have been some case reports of hydrocephalus occurring as a result of infections, such as the parainfluenza virus (2). There are also reports of parasitic (3) and fungal infestations (4) and immune dysfunctions causing hydrocephalus.

The most common cause of acquired hydrocephalus is a brain tumor, which usually affects older dogs (5).

Symptoms of Hydrocephalus in Dogs 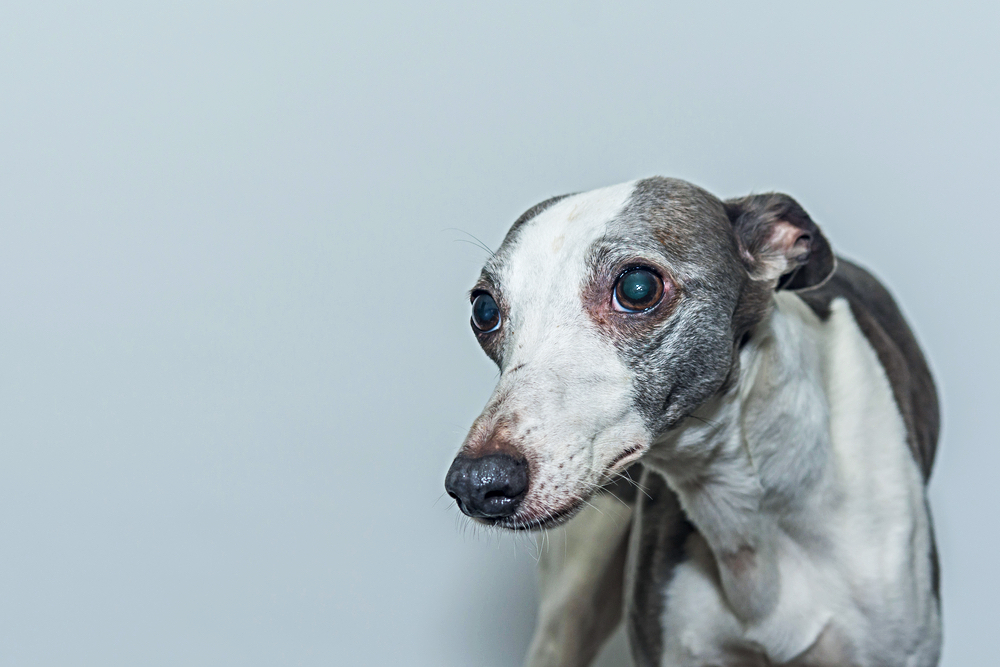 Congenital hydrocephalus affects dogs from birth, and therefore dogs are usually less than six months old when diagnosed. These dogs may be born with few symptoms which then worsen over time, which is why this form is sometimes considered to be a mild hydrocephalus in dogs.

Their eyes may permanently look down or outwards and they usually have behavioral abnormalities including pacing or head pressing.

Other symptoms of congenital hydrocephalus in dogs include:

The symptoms of acquired hydrocephalus are similar, but the dogs are usually older. They are less likely to have the eye signs, fontanel or domed head, and the signs are often more severe than in the young puppies.

Diagnosing This Condition in Dogs 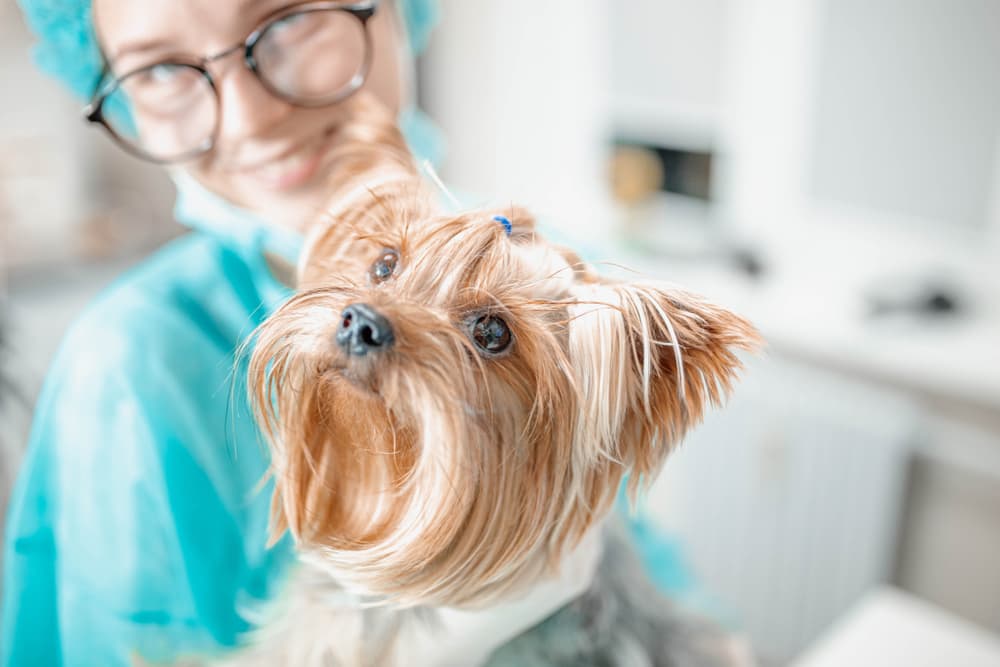 Your veterinarian will likely be suspicious of congenital hydrocephalus if a puppy of the right age and breed presents with a combination of the common symptoms, especially the easily visible ones like a domed head. Hydrocephalus is more difficult to diagnose in adult dogs, as other conditions can cause similar signs.

Blood tests are an important first step in diagnosing hydrocephalus, as they rule out conditions with similar symptoms and also point to possible causes of hydrocephalus in dogs, such as a viral infection.

An ultrasound of the brain can sometimes be conducted in puppies if they have an open fontanel. This involves placing the ultrasound probe over the soft spot, where the skull hasn’t formed correctly, allowing your veterinarian to see the brain.

In puppies with a closed fontanel or in adults, ultrasound is not possible. Instead a brain scan—taken with either an MRI or a CT scan—is usually all that is required to get a diagnosis. This will require your dog to be placed under general anesthesia since dogs need to stay very, very still for the test. Not all veterinary hospitals have a CT or MRI machine, and you may need to be referred to a large hospital with a neurologist on staff.

Your veterinarian may also want to take a sample of your dog’s CSF. This involves placing a needle into fluid-filled space surrounding the spinal cord. This is important to ensure that any contributing causes are treated.

Sometimes, brain activity is checked using electroencephalography (an EEG), although this is not available to all veterinarians.

How to Treat Hydrocephalus in Dogs 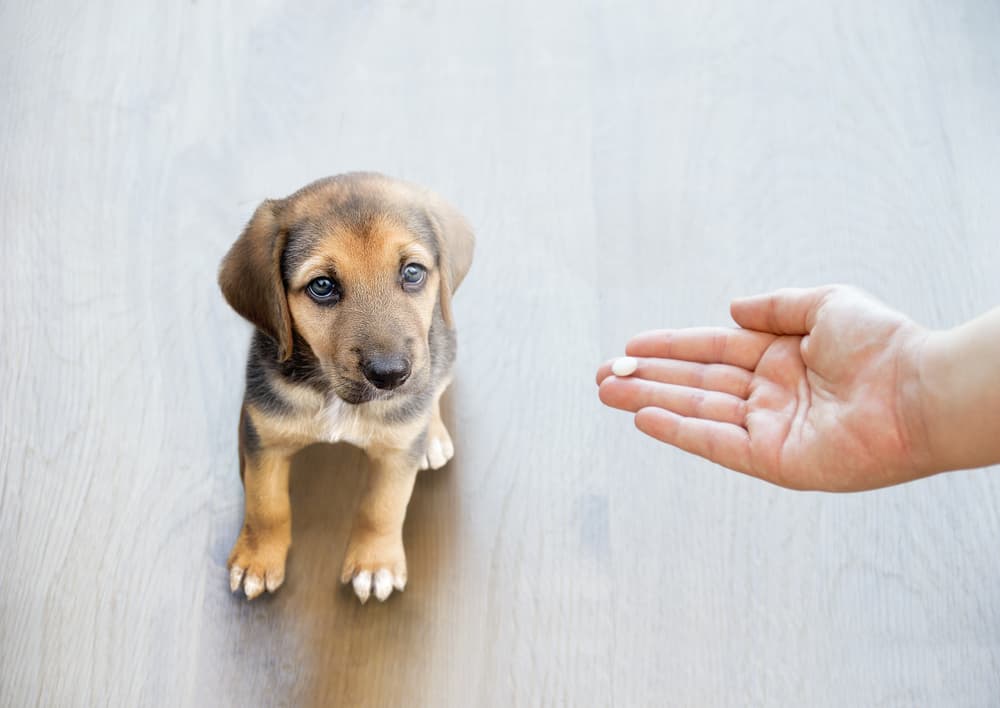 When hydrocephalus is first diagnosed, treatment is aimed at reducing the clinical signs—such as seizures, if they occur—and stopping the production of CSF. The vast majority of dogs will be managed with medication, and the condition will never be totally cured.

If your dog has congenital hydrocephalus, the first medication started after diagnosis is usually a steroid, such as prednisone or cortisone. This takes down any inflammation and reduces the production of CSF. They may also require anti-epilepsy medication, which controls seizures.

The sooner your dog starts treatment, the more favorable the outcome, so it’s important that medications are started right away.

A surgery—whereby a drain or shunt is placed into the brain to remove the fluid—is possible, but it is not performed by all veterinarians and requires a surgical specialist. The surgery success rate is around 80 percent, but complications can be severe, ranging from severe pain to a blocked shunt requiring a second surgery.

Remember, congenital hydrocephalus cannot be cured. However, successful surgery can provide dogs with a longer lifespan and a better quality of life.

If your dog has acquired hydrocephalus, the only option is to find the cause of the condition and try to treat it.

For brain tumors, radiation therapy may be used, but for infections, antibiotics and antiviral medications may be required. Treating these conditions can take time, so a shunt may be placed in the brain to drain the fluid and provide immediate pressure relief while waiting for the other drugs to take effect.

The prognosis for dogs diagnosed with hydrocephalus varies depending on the cause. For instance, a dog with a simple infection, once cured, may have a normal lifespan. But a brain tumor carries a far worse prognosis and it may be challenging for these dogs to recover or live a normal life.

Medications to Treat Hydrocephalus in Dogs

The cost to diagnose and treat or manage hydrocephalus in dogs is expensive and pet parents should prepare themselves for the costs of diagnostic tests, monthly medications, or surgery.

How to Prevent Hydrocephalus

In most cases, hydrocephalus in dogs cannot be prevented. In cases of congenital hydrocephalus, which is possibly genetic, the litter should never be used for breeding and the parents should not be bred from again.

For adult dogs, regular vaccination with the parainfluenza vaccine and anti-parasite treatment may prevent some causes of hydrocephalus. The most common cause in dogs—a brain tumor—cannot be prevented.