Lymphoma is a cancer of the lymphocytes, which are white blood cells located in the body’s immune system. In cats, the most commonly observed lymphoma is gastrointestinal in origin—affecting the stomach or small intestine—and is usually a slowly progressive disease.

However, there are other types of lymphoma that affect cats in different ways.

Let’s go over the types of lymphoma commonly seen in cats, typical diagnostics, and the differences in treatment and outcomes for felines who receive a lymphoma diagnosis.

What Is Feline Lymphoma?

Lymphoma in cats is a type of cancer of the body’s lymphocytes, which are important to a cat’s immune system.

Lymphocytes are found everywhere in a cat’s body, and there are multiple areas where lymphoid tissue is present. This means that lymphoma can develop in those same areas, or eventually impact all of a cat’s lymph tissue.

Types of Lymphoma in Cats

Some of the most common types of lymphoma observed in cats include renal (kidney) lymphoma, nasal (nose) lymphoma, and gastrointestinal (GI) lymphoma.

Small cell GI lymphoma is one of the most common forms of lymphoma observed in cats. It is important to note that the diagnosis between inflammatory bowel disease (IBD) and GI lymphoma can be difficult. In some cases, IBD precedes the development of this type of gastrointestinal cancer and the transition to a cancerous form can make the diagnosis very difficult.

Small cell GI lymphoma typically leads to the thickening of the small intestines and cats may show symptoms of vomiting and diarrhea. This disease tends to progress slowly in comparison to its large-cell counterpart. 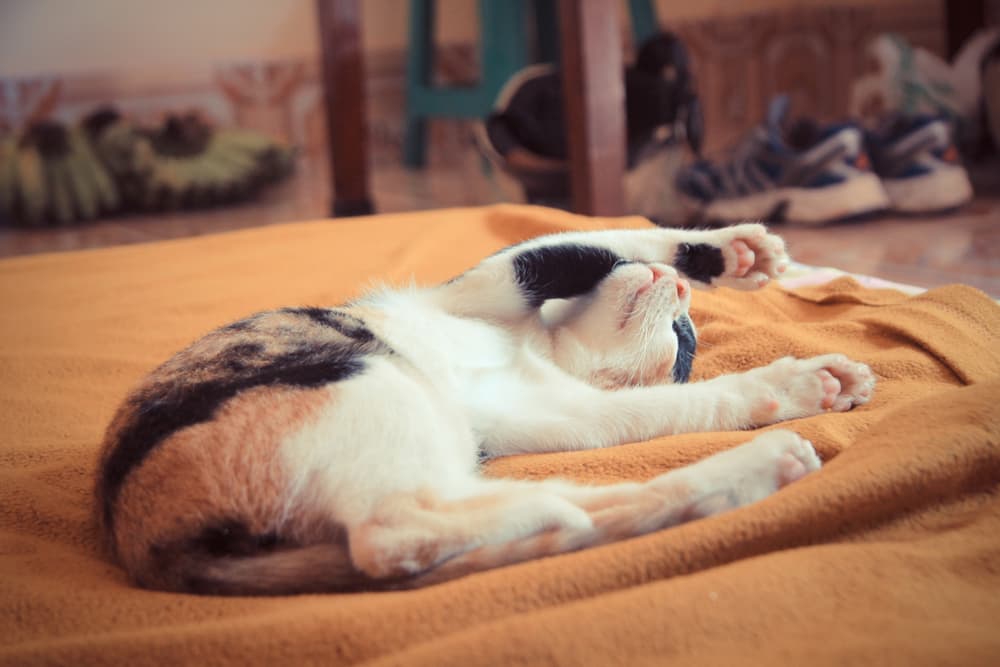 Large cell GI lymphoma usually manifests as masses within a cat’s intestinal tract or stomach (or both). Your veterinarian may be able to feel enlargements or masses within the abdomen during a physical examination.

This disease, in contrast to the small cell form of GI lymphoma in cats, is typically more aggressive and a cat’s health may decline more rapidly without treatment.

Nasal lymphoma is also common in cats. This disease may manifest as a tumor or mass that develops within a cat’s nasal cavity. As a result, the mass can begin to break down and destroy the adjacent bone. This may lead to facial deformities (as if the nose is very swollen) or may sit behind a cat’s eye (leading to ocular pain or loss of vision), or even invade into the skull (resulting in neurological signs or seizures).

The most common clinical signs of nasal lymphoma in cats are sneezing and nasal discharge. Nasal discharge may arise from one or both sides of the nasal cavity and may be mucous-like or blood-tinged. This disease tends to be localized (affecting just the nasal cavity) but in 20-30 percent of cases, other areas of the body (other lymph tissue or lymph nodes) may be affected.

Renal lymphoma affects a cat’s kidneys and could extend to the central nervous system (spinal cord). Cats with this type of lymphoma typically have enlarged and firm kidneys that may be felt during a physical examination by your veterinarian. Kidneys affected by lymphoma also have a characteristic halo-like appearance on abdominal ultrasound. As the lymphoma destroys the normal kidney tissue, renal failure can develop, and clinical signs (including weight loss, increased drinking and urination, and neurologic issues) are usually attributable to this.

Other forms of lymphoma in cats—which are less common—include:

What Causes Lymphoma In Cats? 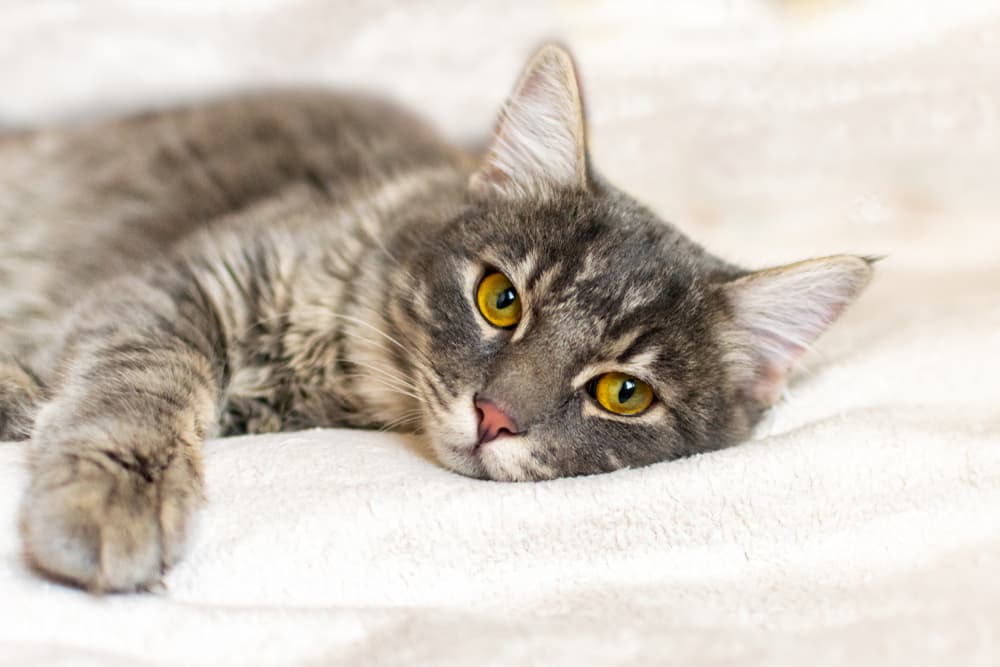 Infection with viruses such as FeLV or FIV have been associated with the development of lymphoma in cats. Though, now with routine vaccination and a better understanding of these diseases, viral-induced lymphomas are much less common. Inflammation associated with chronic inflammatory bowel disease has also been suggested as a possible predisposing factor for gastrointestinal lymphoma in cats.

Symptoms of Lymphoma in Cats 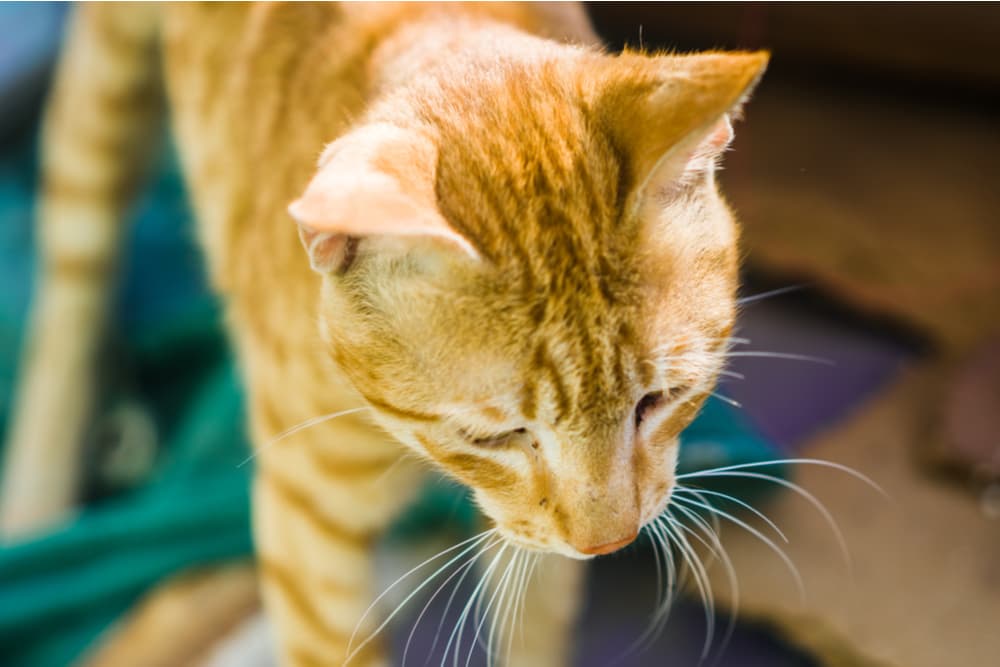 The symptoms of lymphoma generally relate to the location of the disease. In general, the symptoms may reflect other diseases and specialized tests are typically required to obtain a cancer diagnosis.

Some symptoms of lymphoma in cats include:

If you notice any of these symptoms, lymphoma could be possible but is not the only disease where these symptoms may be present. A veterinarian should evaluate your pet and determine if further tests are required.

Diagnosing feline lymphoma is dependent on the location of the symptoms.

In cats with GI lymphoma, when masses are present, samples may be obtained by placing a needle directly into the mass and retrieving cells with guidance from an ultrasound. In other cases, where the inside of the intestinal wall is affected (small cell GI lymphoma) biopsies with an endoscope—a device used to look inside the body—are typically required. In some cats, a surgical biopsy is required, where a biopsy punch is used to take a sample of the intestine in its full thickness, under a general anesthetic.

In cats suspected of having nasal lymphoma, a CT scan is typically used to evaluate the location of the mass (if one is present). Nasal biopsies are then obtained and sent to a pathologist to review. In some cases, if there is enough bony destruction that the mass is accessible with a needle, a sample may be obtained in this way as well.

Where renal lymphoma is suspected, veterinarians may place a needle directly into the affected kidney tissue and retrieve cells with the guidance of an ultrasound. If the cell sample is inconclusive, kidney biopsies can be pursued, but is less commonly required for renal lymphoma.

How to Treat Lymphoma in Cats 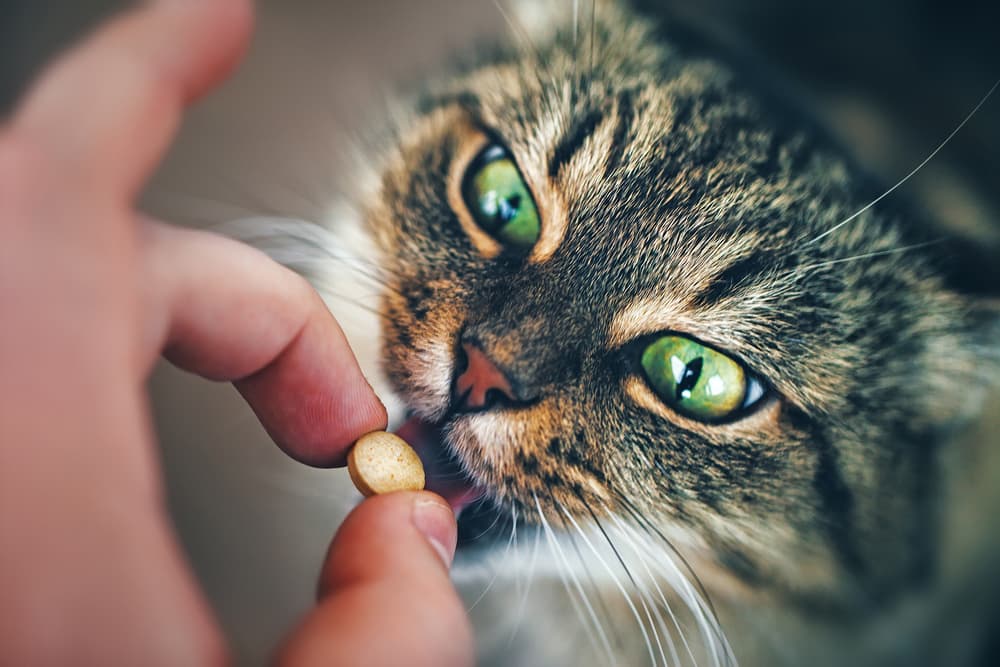 Treatment for lymphoma in cats depends on the specific type of cancer. Many types of lymphoma will be treated with either systemic therapy (chemotherapy) or local therapy (radiation therapy).

Chemotherapy in animals is very different from people, and the typical side effect rates are not as high in veterinary medicine. Veterinarians typically focus on treatments that will benefit and promote a cat’s quality of life.

This is typically a slowly progressive disease and clinical signs and disease control can be managed with chemotherapy. A common drug used is Chlorambucil, and this is typically combined with prednisolone.

Response rates usually exceed 80 percent, and survival times with this type of treatment range from 1.5 to 3 years.

This type of GI lymphoma in cats is very aggressive. In some cats that have a single lesion affecting the intestine, surgery may be considered. In most cases there are several masses and therefore surgery is not appropriate.

For cats with this type of lymphoma a more aggressive chemotherapy protocol is typically pursued, called the CHOP protocol. This protocol ranges from 19-25 weeks in duration and cycles through three chemotherapy drugs, combined with prednisolone.

The treatment response rate is roughly 50-60 percent, with survival times ranging from 3 – 10 months. Patients that have complete remission (ie. tumors completely go away after starting therapy) tend to have longer survival times than those that do not. 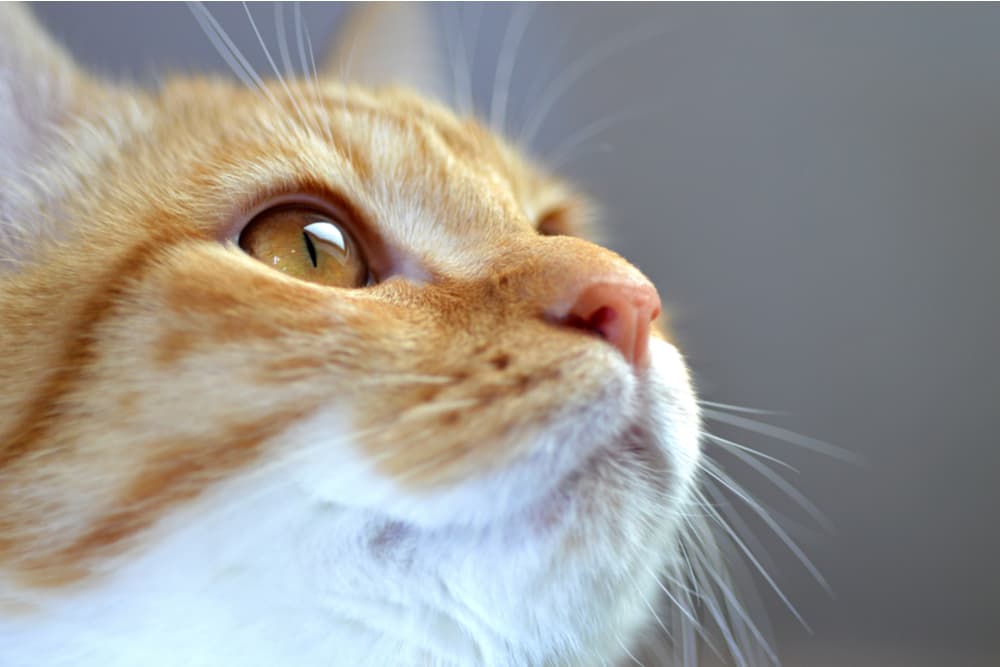 Nasal lymphoma is typically treated with local therapy, such as radiation therapy. Many different protocols exist. Generally, treatments are given daily from Monday to Friday for 15 treatments (3 weeks).

Response rates to radiation range from 75-90 percent, with survival times anywhere from 1.5 to 3 years. Those that do not respond fully to radiation have a decreased survival rate of roughly 4-5 months.

If radiation therapy is not elected or available, chemotherapy can also be pursued. Similar to large cell GI lymphoma, this is typically the CHOP protocol. Response rates range from 75-90 percent with median survival times of roughly 2 years for cats who respond fully.

Renal lymphoma is aggressive, similar to other large-cell lymphomas. Chemotherapy with a CHOP-based protocol is typically recommended.

Approximately 60-70 percent of patients will experience benefits (improved clinical signs), though the median survival times are about 4-7 months.

Cost to Treat Lymphoma in Cats

The cost of lymphoma treatment depends on your geographic area and availability of chemotherapy medications. These are generally administered by a board-certified oncology team. Similarly, radiation therapy is not available everywhere.

The diagnosis and treatment plan for feline lymphoma should be discussed with your veterinarian and a board-certified veterinary oncologist. The data cited here is only a guide and there are cats that may have prolonged or much shorter remissions than those listed here.

Ultimately, the goal is to improve the quality of life of cats affected with a cancer such as lymphoma. Veterinarians never want treatment to be worse than the disease itself.