Keratitis is a painful inflammatory eye disease that can occur in all breeds of cats. It has several causes, from injury to viral disease. 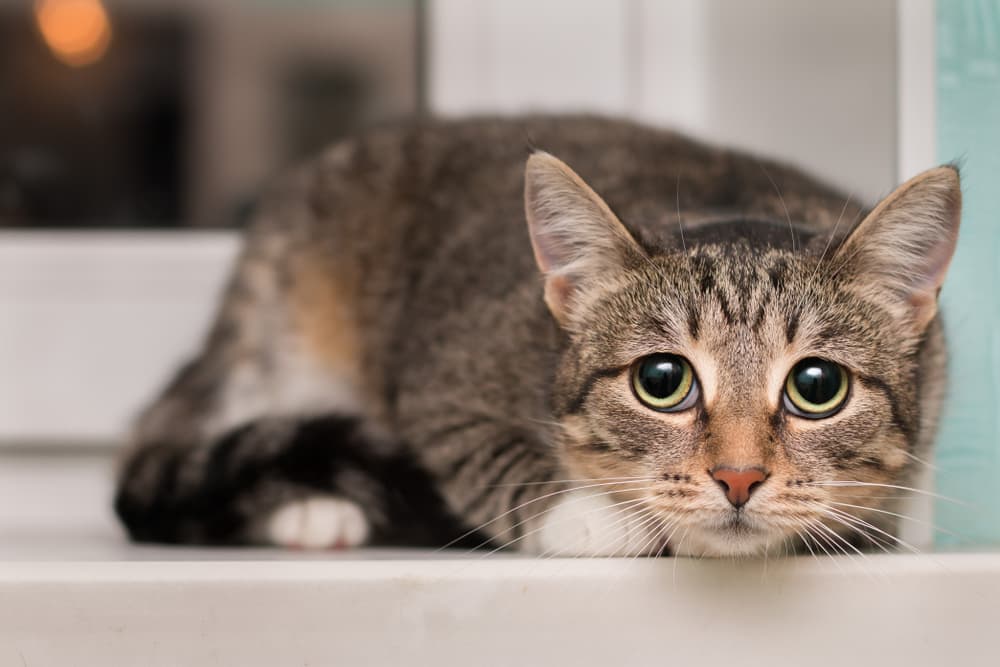 Keratitis refers to inflammation of the cornea—the surface layer of the eye. This layer is usually transparent, but keratitis can cause the layer to become cloudy, affecting a cat’s vision.

Cats can suffer from several types of keratitis, depending on the cause of inflammation. These types include:

Keratitis is sometimes seen alongside conjunctivitis, which means inflammation of the conjunctiva—the inner surface of the eyelids. However, cats can get keratitis without conjunctivitis and vice-versa.

Types of Keratitis in Cats 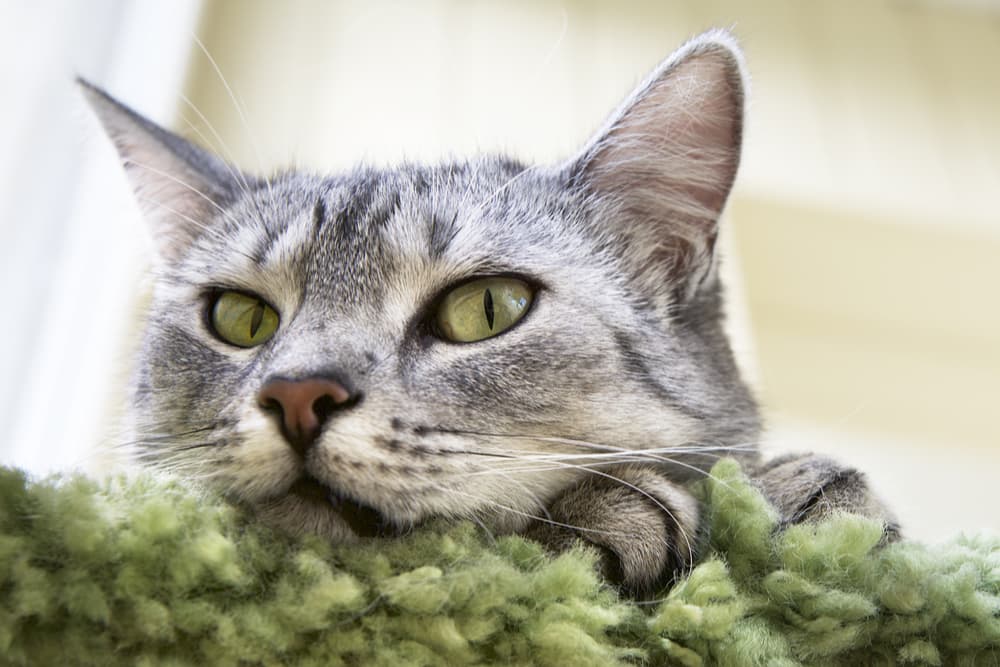 Keratitis can be ulcerative or non-ulcerative depending whether the inflammation is related to eye damage.

Ulcerative keratitis refers to inflammation in the eye caused by an ulcer—a scratch, dent, or other damage to the surface of a cat’s eye. This type of keratitis is painful and causes squinting, increased tear production, and rubbing at the affected eye as well as the cloudiness often seen with keratitis.

Non-ulcerative keratitis means that there’s no trauma to the surface layers of the eye, so the inflammation is caused by something else, such as dry eye syndrome, a viral attack, glaucoma, or eye infections.

Sometimes the signs of non-ulcerative keratitis, being more subtle, mean the disease is not noticed until it becomes ulcerative. These symptoms are often mistaken for conjunctivitis or a feline eye infection by pet parents, but in reality bacterial infections are rarely to blame.

Symptoms of Keratitis in Cats 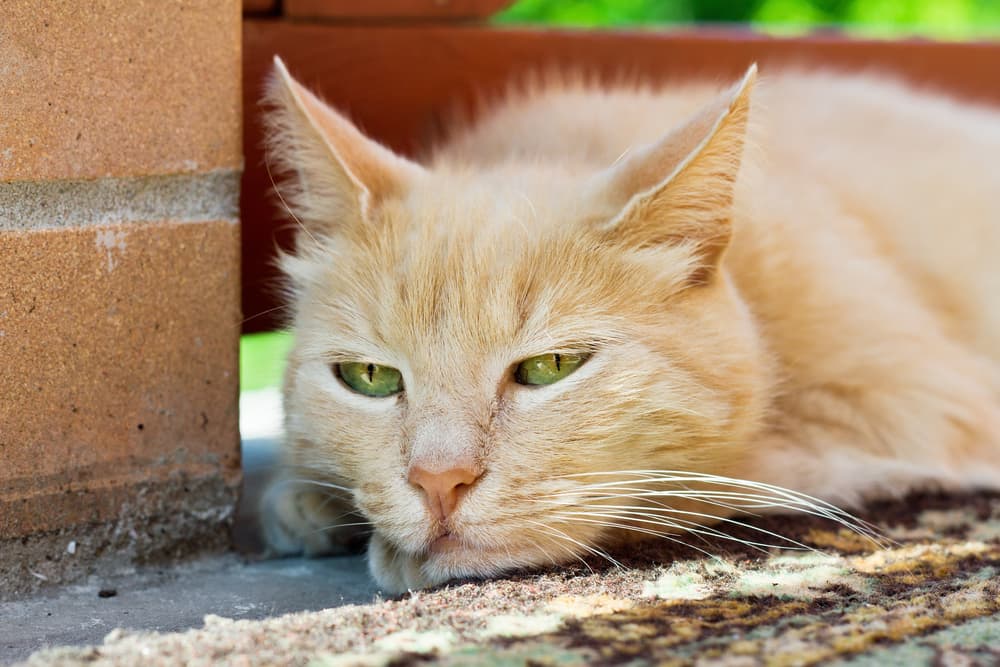 If there is an ulcer, cats will usually show signs of pain such as blinking, tearing, or squinting. They may also groom their eyes excessively or use furniture or the carpet to rub their eyes.

Other signs of keratitis in cats include:

Causes of Keratitis in Cats 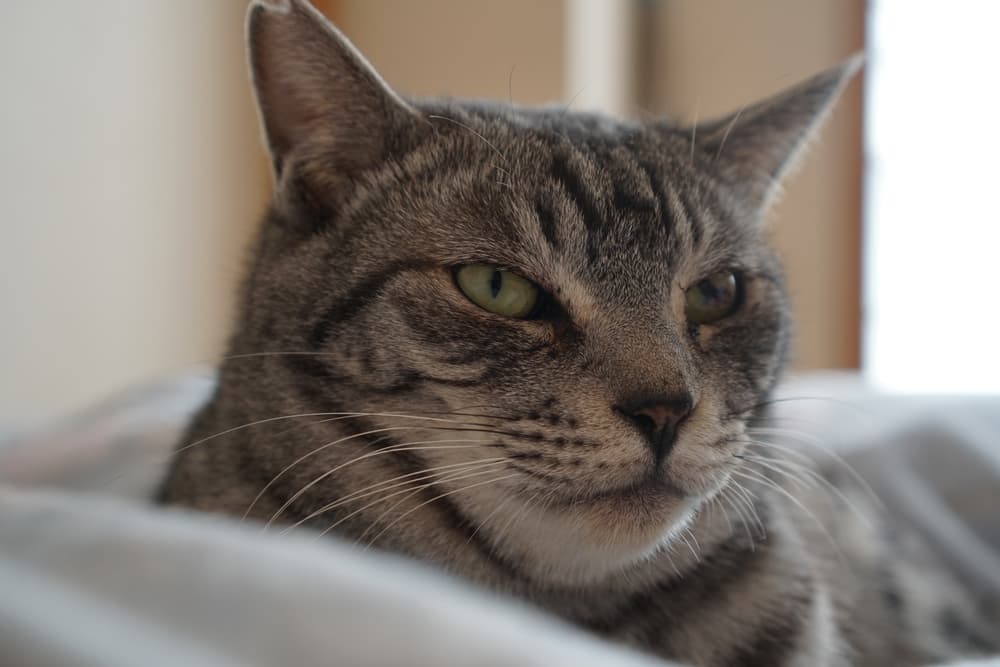 Ulcerative keratitis is usually caused by trauma to the cat’s eye. This affects all cats, although it is slightly more common in cats with shorter noses and bulbous eyes such as Persians, Burmese, and Himalayans.

Although traumatic ulcers can occur in cats of any age, as they get older it slowly becomes less likely that trauma is to blame and more likely that there’s something else going on, such as a form of undiagnosed non-ulcerative keratitis that has become ulcerative.

Non-ulcerative keratitis can have many causes. Viral infection, especially with feline herpesvirus, has commonly been associated with keratitis in cats. Herpesvirus infection occurs in all cat breeds but is more common in cats born to unvaccinated mothers and those living in large groups.

Eosinophilic keratitis in cats has also been observed in all breeds. However, it appears to be slightly more common in neutered male cats and cats under the age of four years old. 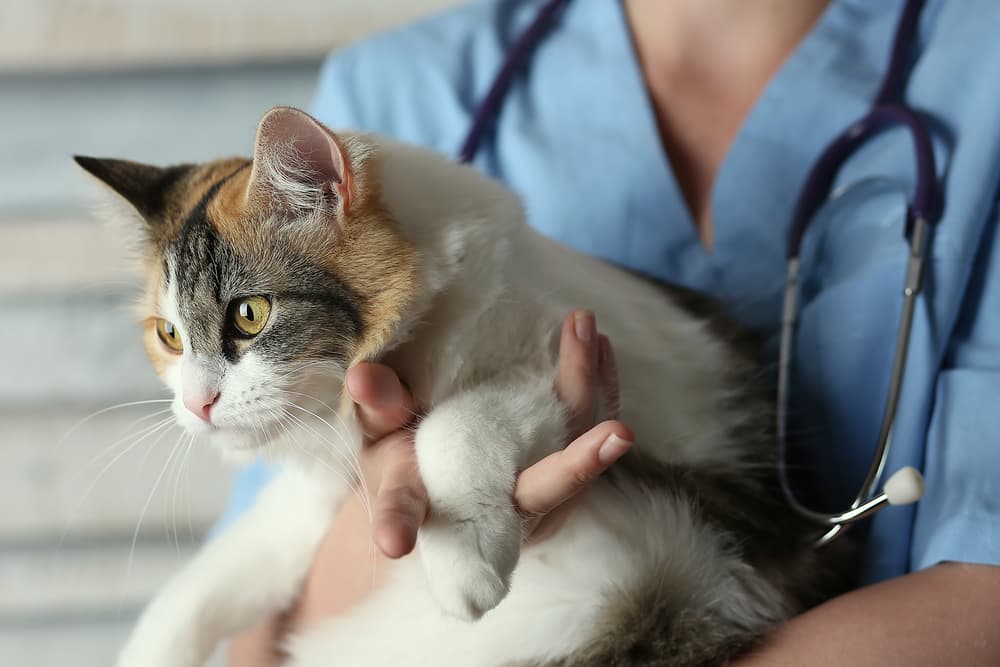 In order for your veterinarian to diagnose your cat with keratitis, he or she will need to perform a physical exam. They will usually perform a general physical examination, then conduct a further examination of your cat’s eyes.

Your veterinarian will look closely at your cat’s cornea under natural light, and in the dark using a torch. They may need to apply a dye called fluorescein to the eye. This orange dye turns green in contact with the surface of your cat’s eye. In a normal, healthy eye the dye will slide right off and pool in the corner of the eye, then drain to the nostril. If the cat has an ulcer, the dye gets caught in the ulcer, highlighting the extent, depth and size of the damage. Eosinophilic plaques also take up dye.

If your veterinarian suspects a simple corneal ulcer to be the cause of the keratitis, it’s possible that examinations will stop here. However, for cats with recurrent ulcers, or for those with non-ulcerative keratitis, further examination will usually be necessary.

Tear-production tests may be undertaken by putting strips of absorbent paper into the eye and watching to see how much the eye waters. Veterinarians may also scrape at the surface of the eye to have a look at the cells under the microscope. This will help to distinguish eosinophilic keratitis from other forms of keratitis. Throat or eye swabs can also help to diagnose herpesvirus infection.

While many of these tests can be performed by your usual veterinarian, it’s important to understand that your vet needs to work within the grounds of their confidence. If at any point they don’t have the necessary equipment, if they’re unsure about the next steps, or feel that the case is too complicated for them to work up, they may recommend you to a veterinary ophthalmologist or feline specialist. 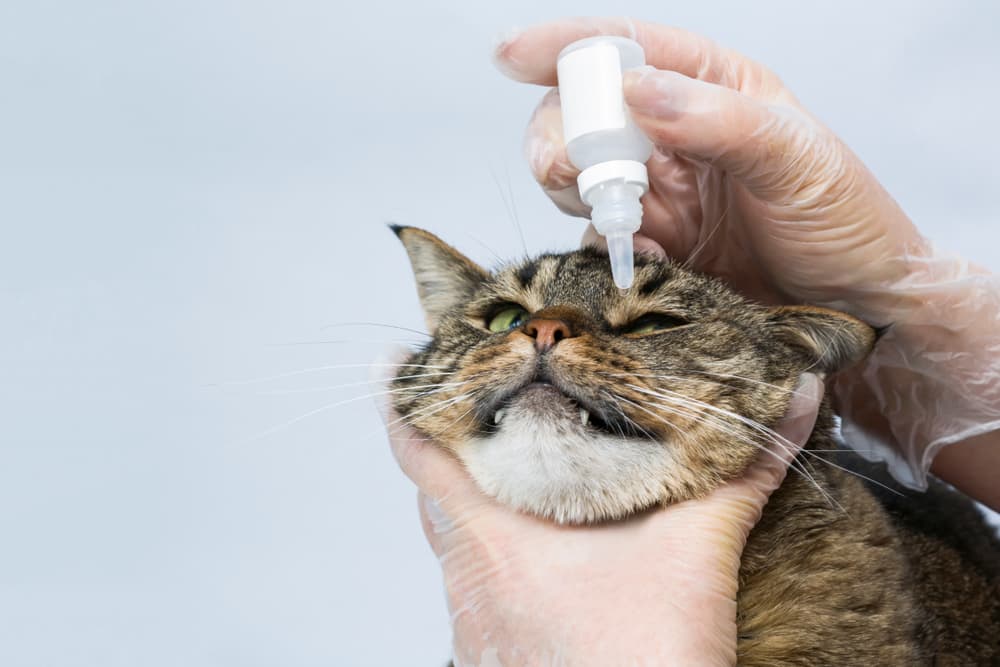 Treating keratitis in cats usually requires topical medications in the form of eye drops, although in some long-standing and complex cases, surgery may be required.

In ulcerative keratitis, the key is to protect the eye while the ulcer heals. An Elizabethan collar or plastic collar is used to prevent further injury, and antibiotic drops are usually given to prevent infection of the ulcer. Cat eye lubrication and pain relief may also be given to comfort the cat while an ulcer heals.

In severe cases of feline keratitis, surgery can be used to remove damaged portions of the cornea or to repair the damage. Contact lenses may also be used to provide a bandage for the eye.

If the keratitis is non-ulcerative, several medications and rounds of treatment may be necessary. Medicated eye drops containing steroids or other immune-suppressants may help to reverse the invasion of eosinophils in eosinophilic keratitis. Cat eye drops containing antivirals may also be useful if the cause is suspected to be viral. Oral antivirals and injectable steroids may be required in severe cases, or for cats who refuse topical treatment.

Medications to Treat Keratitis in Cats 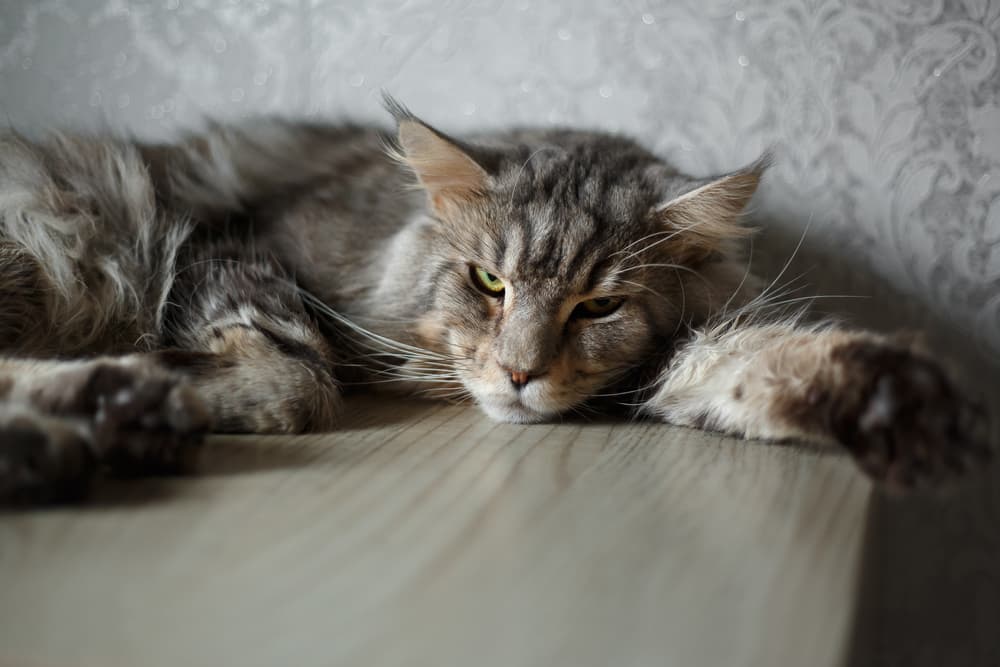 The type of medication recommended by your veterinarian will depend on the suspected cause of keratitis. Medications include:

Topical Antibiotics: These include eye drops or eye ointments that need to be applied every 4-12 hours depending on the active ingredient and the formulation. They keep bacteria at bay while your cat’s eye heals.

Topical Steroids: Topical steroids work as anti-inflammatories and, depending on the dose and formulation, they also suppress the immune system. This can be useful in treating eosinophilic keratitis and other immune-related eye conditions. They have fewer side effects than oral or injectable steroids.

Topical Antivirals: Eye drops containing antivirals may be used where herpesvirus is thought to be the cause of the keratitis, or where eosinophilic keratitis is severe.

Oral or Injectable Steroids: Sometimes used when topical steroids are not appropriate or available. They usually come in tablet form if oral.

Oral Antivirals: L-lyseine is a natural supplement sometimes recommended to increase the body’s ability to control and kill viruses. It is found in liquid, powder, and tablet form.

A simple case of ulcerative keratitis in a young cat with no other concerns is likely to cost in the region of $100-$200. Your cat will need—at a minimum—a clinical exam, fluorescein test, and pain relief and antibiotic drops. Costs for exams, tests, and drugs can vary.

For a complicated case of eosinophilic keratitis requiring referral, swabs, and several types of medicated drops, costs are more likely to be in the region of $750-$1,000.

How to Prevent Keratitis in Cats 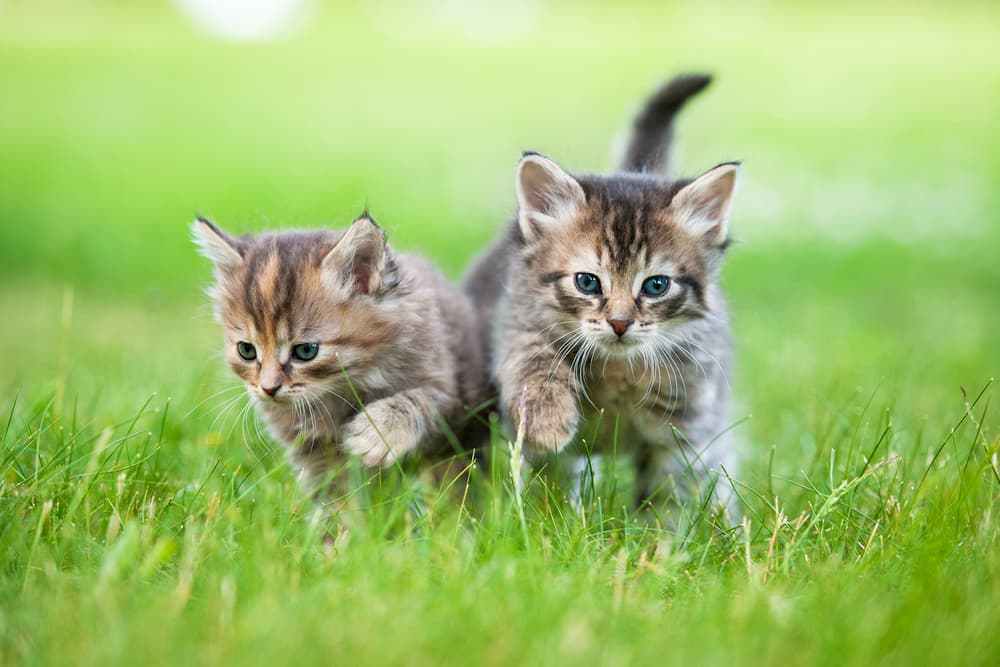 Since there are so many causes of keratitis, some of which are unknown, it can be difficult to prevent. However, choosing kittens from a good breeder with a reliable vaccination history can make it less likely that they suffer from herpesvirus and therefore make non-ulcerative keratitis less likely.

However, there are other causes of keratitis in cats that cannot be prevented, and recognizing the signs and promptly following treatment directions can help your cat heal and feel better.