Giardia is a tiny, one-celled parasite that can cause an intestinal infection in pets called giardiasis.

In 2019, less than 4 percent of cats who were tested in the United States tested positive for giardia, according to data from the Companion Animal Parasite Council (CAPC).

Cats who frequent the outdoors or who live in certain geographic locations could be exposed to giardia at higher rates. States that have increased prevalence include:

Because symptoms of giardia infection in cats can be easy to miss or completely absent, it’s important to understand what the disease is and how to help your pet.

What is Giardia in Cats?

Giardia is a single-celled organism that colonizes the small intestines of cats. It is transmitted by ingesting water or debris that have been contaminated with infected feces.

In the intestines, giardia appears as a motile organism, meaning it’s capable of movement. When it is shed into the environment, it is in the form of a cyst that is resistant to cold weather, freezing, and chlorination, making it stable for a long time.

Most commonly, cats do not exhibit clinical signs of giardia, and the diagnosis is made on a routine fecal screening that veterinarians recommend annually.

What Causes a Giardia Infection? 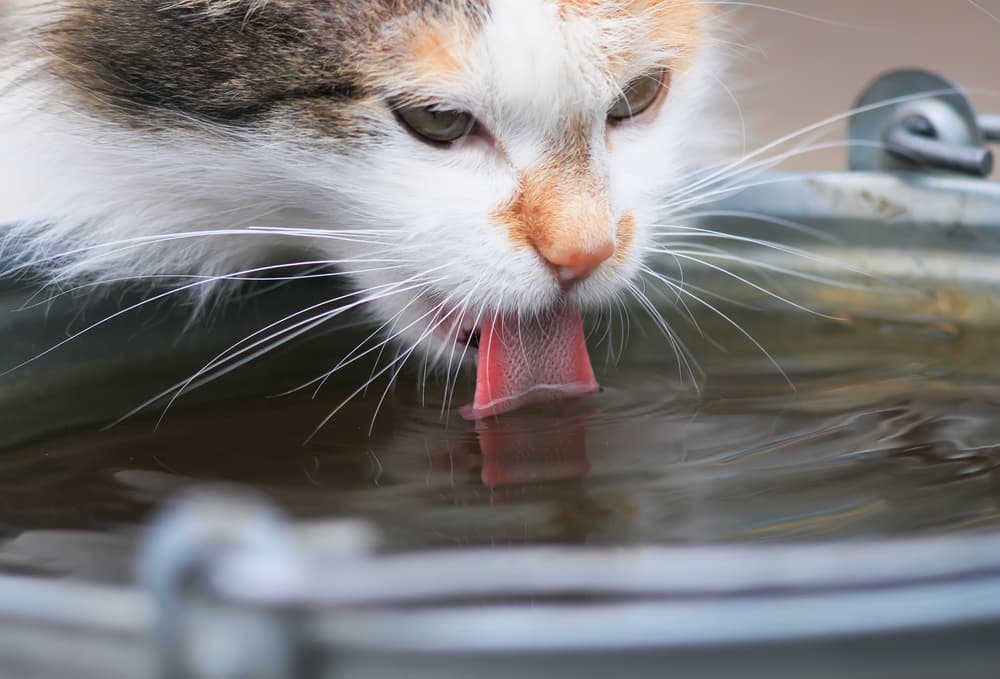 Cats can become infected with giardia by ingesting cysts in contaminated water, dirt, or food bowls. It is considered to be contagious among cats.

Even if one cat in a multi-cat household does not exhibit signs but is diagnosed with giardia, it’s recommended to test all the cats in the household and treat for the infection. Careful hygiene practices can also limit persistence of giardia in the environment.

Although giardia is considered to be zoonotic, meaning it’s passable from cats to humans, it is rare to diagnose feline giardia in a human or human giardia in a cat. Transmission from cats to dogs, and vice versa, is also unlikely. Each giardia species typically prefers its respective host.

As mentioned before, cats often do not exhibit clinical signs of giardia, even when infected. If your cat does develop symptoms, they will typically occur within five to 16 days of ingesting giardia cysts. Symptoms of giardia in cats may include:

The diarrhea is caused by the parasite damaging the intestinal cells, leading to maldigestion, malabsorption, and subsequent diarrhea. Usually there is no blood in the feces.

Your veterinarian may recommend testing for giardia if your cat exhibits signs of gastrointestinal (GI) upset, such as vomiting, weight loss, or poor appetite. However, the direct link between these clinical signs and giardiasis is unclear.

Diagnosing Your Cat with a Giardia Infection 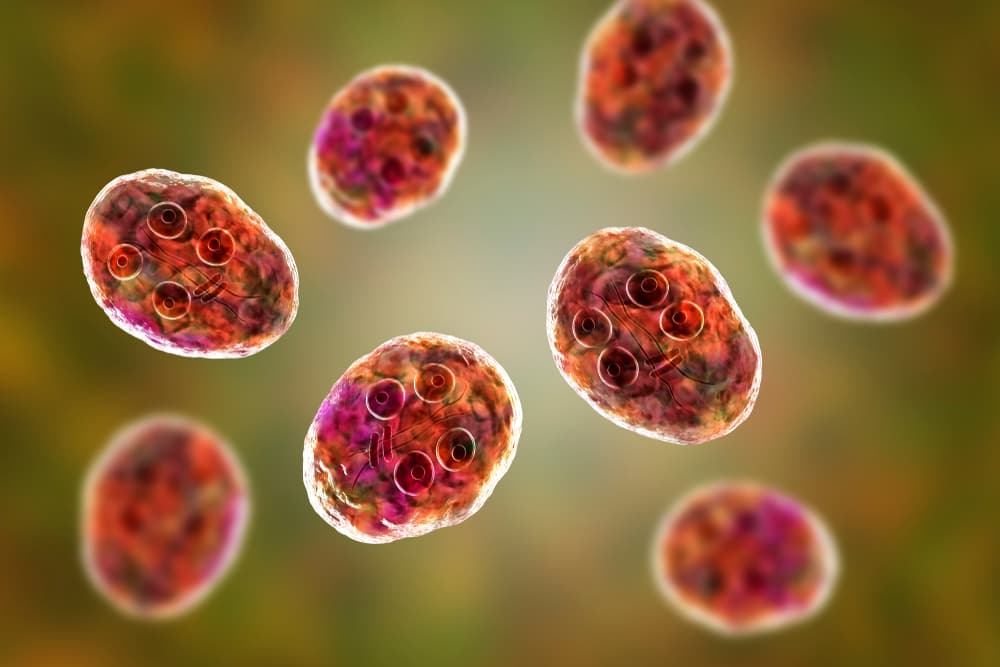 If you are concerned that your cat may have giardia, your veterinarian can perform a fecal examination to look for the infection.

However, giardia can be elusive. That’s because host cats shed the cysts intermittently and they can also be difficult to identify by fecal analysis.

The difficulty in identification can be secondary to the small size of the organism as well as its similar appearance to other organisms that may appear in feces.

It is important to screen all cats at least annually for giardia so it is not missed, even in indoor-only cats. This will not only help prevent illness in your cat but also limit the spread of infection to other pets and people.

Fecal testing should always be done in conjunction with a physical examination since positive fecal tests require treatment.

Depending on the patient, bloodwork and urinalysis testing may also be recommended as part of the annual exam but is not specific to a diagnosis of giardia.

How to Treat Giardia in Cats

In many cases, giardia that causes diarrhea in a cat may indicate other underlying GI disease, so a thorough review of history and clinical signs as well as treatment options is recommended.

Due to the possibility of giardia-induced diarrhea in a cat being secondary to underlying GI disease, other recommendations, such as diet changes, may be helpful.

The prognosis for cats with giardiasis is excellent, although it can prove challenging to actually eliminate the disease.

Medication for Giardia in Cats

No drugs are specifically approved by the FDA for the treatment of giardiasis but many are commonly used for this infection.

Fenbendazole (Panacur) given at a dose of 50 mg/kg for five days has shown efficacy in dogs and likely cats but is not approved in cats. Even without being approved, it is still commonly used as a treatment for giardia in cats.

Additionally, metronidazole at a dose of 15-20 mg/kg for five to 10 days can help to treat the infection.

General Cost of Treatment for Giardia in Cats

The cost of diagnosis and treatment for giardia in cats may vary based on region as well as the full clinical presentation of the cat. A fecal test including a giardia ELISA antigen test should cost between $50 and $100. Treatment should fall into the same range.

If additional tests (e.g., bloodwork, urinalysis, imaging) are needed based on the findings of the physical exam, diagnostic costs could increase.

How to Prevent Giardia in Cats 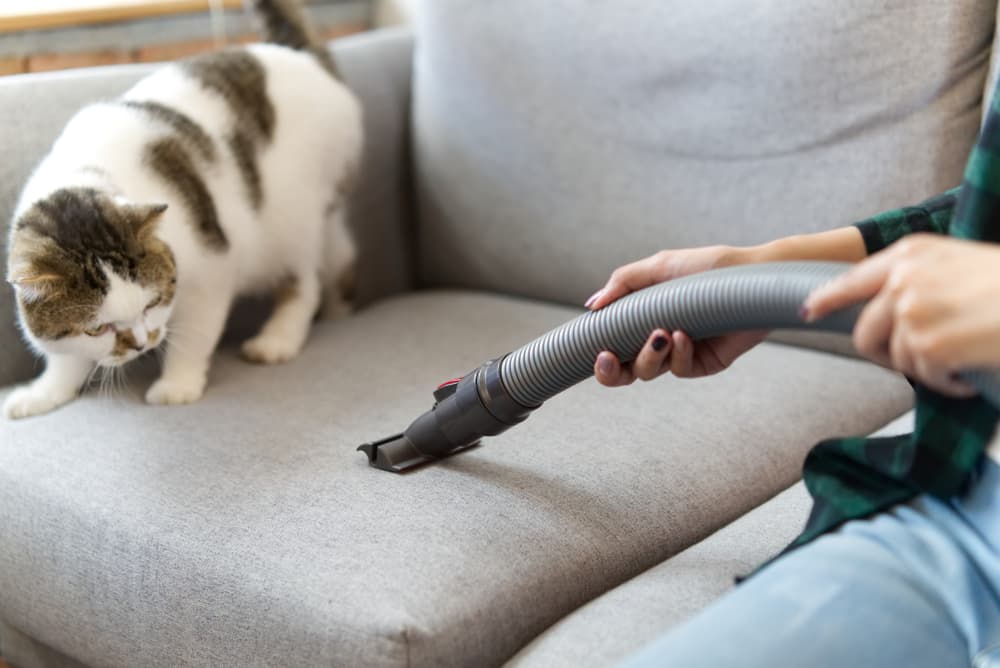 In multi-pet households, hygiene is extremely important. If a pet is diagnosed with giardia, bathing all of the pets is helpful to get any cysts off the fur and prevent the pet from ingesting cysts during normal grooming behaviors. Also, cleaning the environment, including washing any bedding in hot water and bleach, can be very helpful.

Fecal matter should be removed from the pet’s environment, especially if the fecal matter contains giardia. In general, when walking your pet or living with an indoor-only cat, be wise to limit contact with fecal matter as much as possible.

Removing your shoes when entering the house, washing the paws of dogs who walk outside and could carry feline or canine giardia into the house, and washing your hands when you return from a dog walk can help prevent the spread of giardia and other parasites in your environment.

Dr. Stephanie Liff is a veterinarian working in New York City (Manhattan and Brooklyn) since 2009. She has a special interest in internal medicine and dermatology and loves working closely with clients and educating them on preventative and wellness care for their pets. She lives in New York with her 3-year-old Labradoodle, Kyrie, who she adopted from Charleston, South Carolina. When she’s not taking care of pets, Dr. Liff is an avid sports fan who follows all the Cleveland sports teams and roots for her college team, the Michigan Wolverines.