Cats have an extensive repertoire of vocalizations—at least 12 distinct ones, experts say (1). They practice meowing, growling, purring, trilling, and howling to name a few. Each of these unique cat sounds offers clues into what a cat may be feeling.

Cat hissing is one behavior that indicates fear and acts as a way to warn off others, but it’s also associated with other negative feelings like anger and distrust. It can even signal a health issue.

Understanding the science behind hissing places you in a better position to decipher cat communication, and ultimately help your cat thrive.

Cat Hissing: How to Identify the Sound 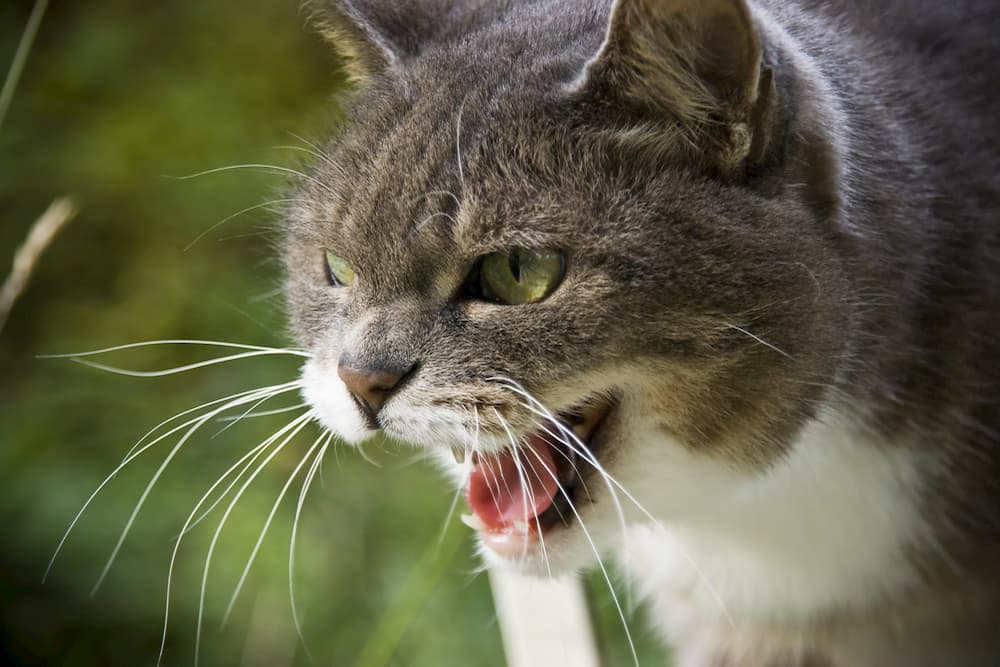 If you’re a feline parent, chances are you’re already familiar with the cat hissing sound. It’s similar to a snake hiss or the sound of air being released from a car tire as it goes flat, which is precisely what’s happening, says Dr. Sasha Gibbons, an associate veterinarian at Just Cats Veterinary Hospital in Stamford, Connecticut.  “A hiss is made by cats forcing air through their mouth during exhalation,” she explains.

Hisses are different from other cat noises like the high-pitched chirp, trill, or meow, which are generated in the vocal cords, Gibbons says.

The cat hiss is a powerful burst, says Pam Johnson-Bennett, certified cat behavior consultant and owner of Nashville-based Cat Behavior Associates. “And if you’re close enough to the cat’s face you can actually feel the force of air coming out.”

“Just as everyone has a unique pitch and timbre (tone) to their voice, so do cats, which includes the sound they make when they hiss,” she says. “And the hiss can also vary based on the intensity of the situation-from a silent, open-mouth hiss that is more a visual indication of displeasure, to a full-on ‘spit’ sound.”

Why Do Cats Hiss? 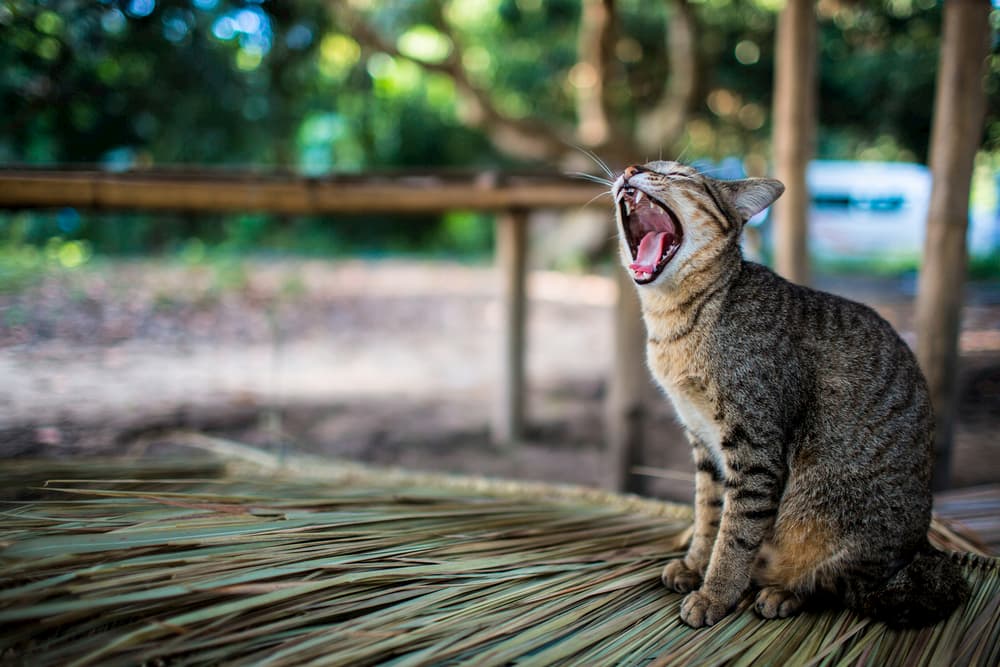 It may be tempting to believe that your cat is hissing for no reason, but it’s generally associated with negative emotions like distrust, anger, annoyance, uncertainty, pain, or a combination of these, says Demos. “Hissing is one of the few sounds that contain little ambiguity: [it means] back off, buddy!”

It’s used as a defensive warning to deter an oncoming opponent, says Bennett. “Experts believe hissing is meant to sound like a hissing snake to scare off attackers. Mimicry is a common survival technique used by animals and insects.”

Why Do Cats Hiss at People? 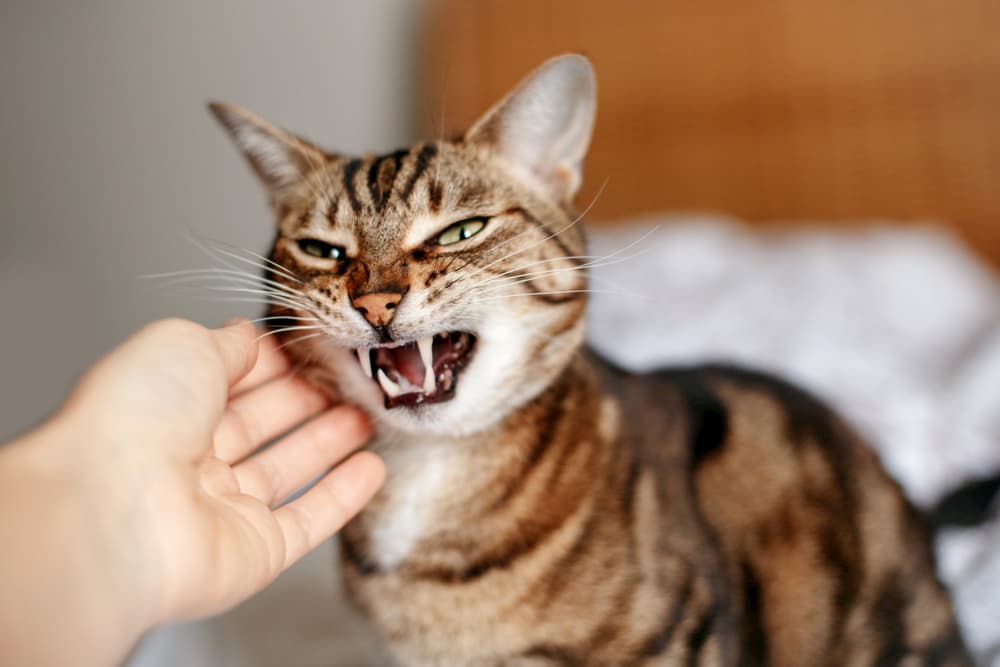 Cats hiss at people because that cat feels an immediate threat, says Bennett. “His first instinct is to hiss in the hope that you will back off,” she says. “Hissing at you usually means you’ve moved too quickly toward the cat or he’s unsure about what you’re about to do.”

Even a cat you share a close bond with might hiss at you, she says. “Hissing is a reaction to an immediate situation and doesn’t mean the cat dislikes you,” Bennett adds.

Humans can unintentionally trigger hissing in a number of ways, says Dr. Liz Stelow, chief of service of clinical behavior service at the Veterinary Medical Teaching Hospital at University of California, Davis.

Some of these, she says, include the following.

Cats Hissing at a New Kittens or Other Pets 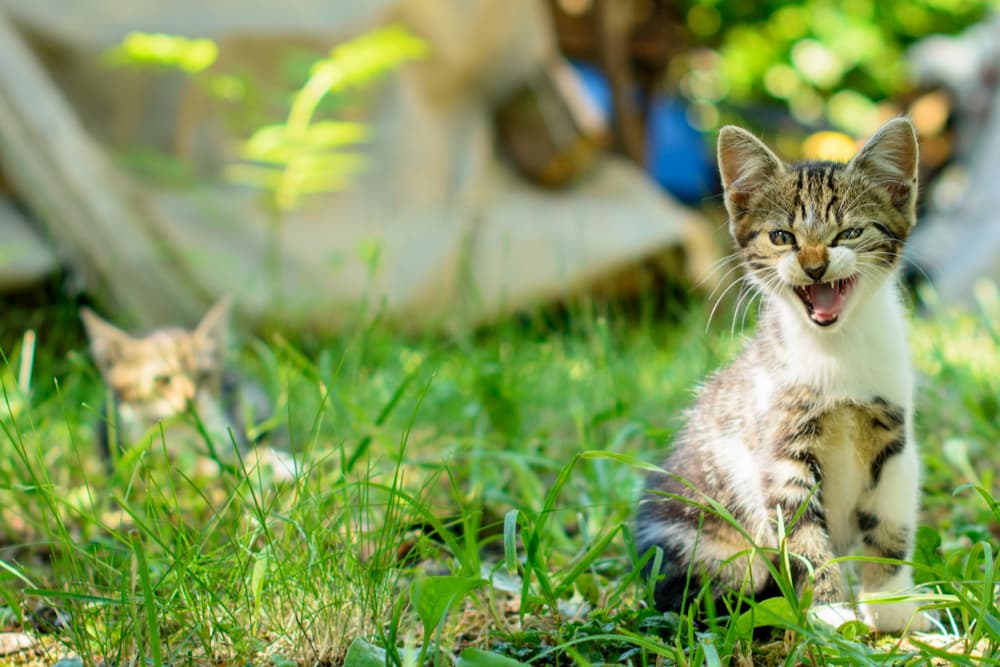 Given that cats base their social structure on available resources, a new pet can be seen as a threat to those resources, says Bennett. “Since cats don’t like to have physical confrontations, they often use the hiss as an initial warning with the hope that no physical fighting will be needed.”

A cat hissing at a new kitten or cat isn’t unusual. “Cats may hiss at new kittens to establish boundaries, generally when the established cat’s boundaries are being pushed,” adds Demos. “A hiss is a quick means to tell the kitten to stop.”

What To Do If Your Cat Is Hissing 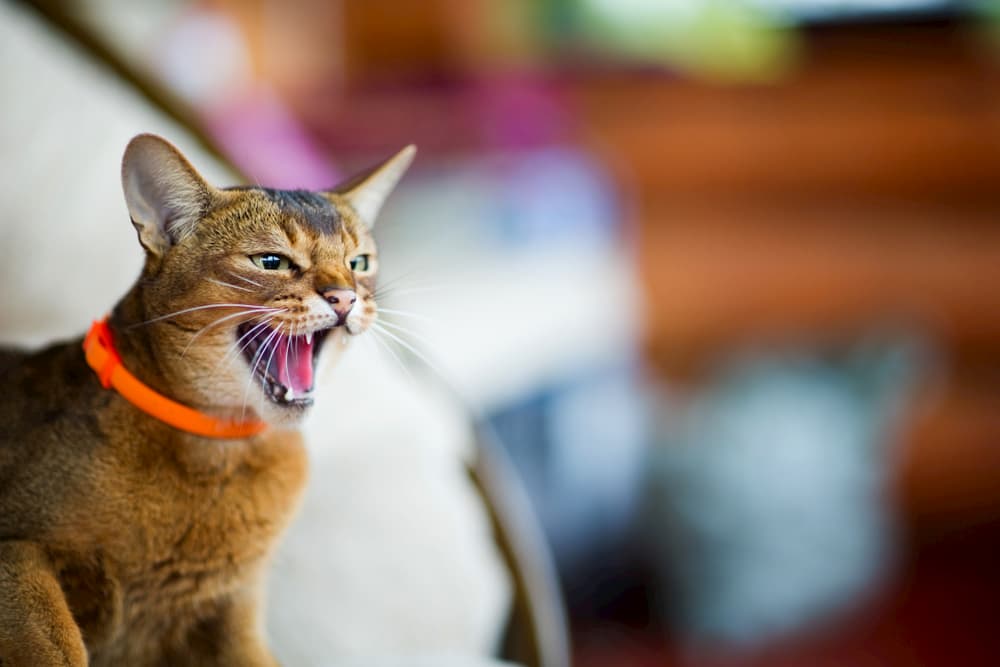 Cat hissing is a warning, reminds Demos. “This means you do not want to push the interaction any further—so no touching, no petting, no picking them up,” she says. “Generally, hissing is the last warning you will get prior to physical contact such as a swat, or a bite. So find ways to de-escalate the situation. Stop making direct eye contact, back away, don’t try and touch or pet this cat.”

Bennett recommends giving the cat time to settle down, and providing an escape option. “If a cat feels there isn’t any choice, that’s when aggressive behavior might be displayed,” she says.

Additionally, Bennet explains that it’s important to never punish a cat for hissing or you’ll increase your feline’s fear and aggression.

How To Stop a Cat From Hissing 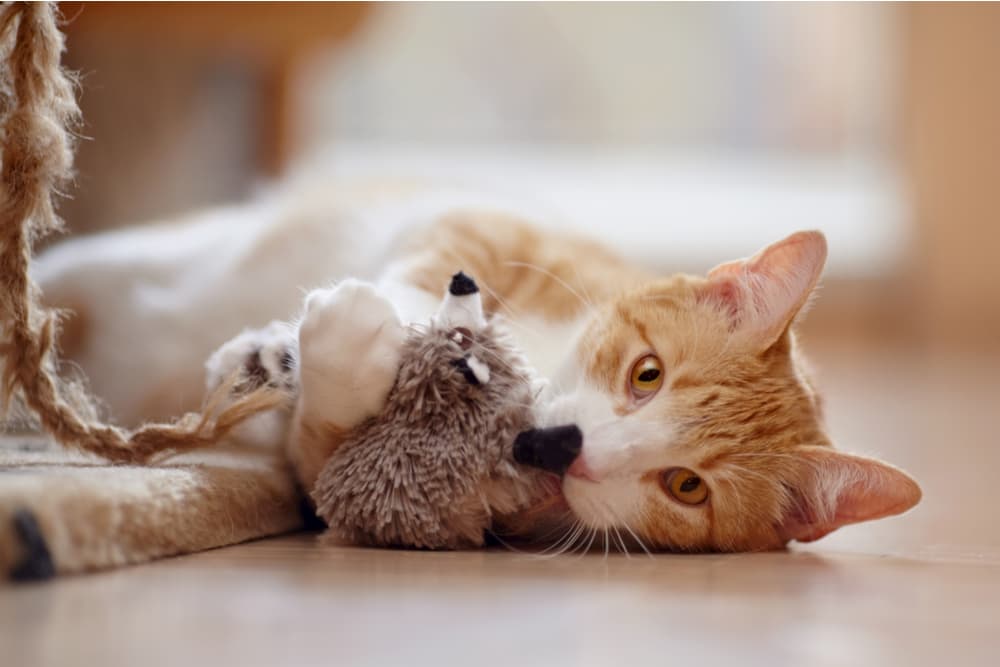 Rewards like toys, treats, or canned food can sometimes help relieve the anxiety and stress associated with cat hissing, says Demos. “Try to do this at a distance, not up close and in the face of any cats involved in the situation,” she says.

Additionally, if you have a multi-cat household make sure each cat has their own bowls, toys, and space. “Give them separate dishes to eat from, separate toys to play with, and preferably, in separate rooms or at least out of visual range,” adds Demos.

How To Prevent a Cat From Hissing

Bennett says cat hissing often occurs because a pet parent isn’t paying attention to other signals that indicate possible discomfort. “Pay closer attention to your cat’s body language and also, provide choice when it comes to interaction so your cat never feels backed in a corner.” 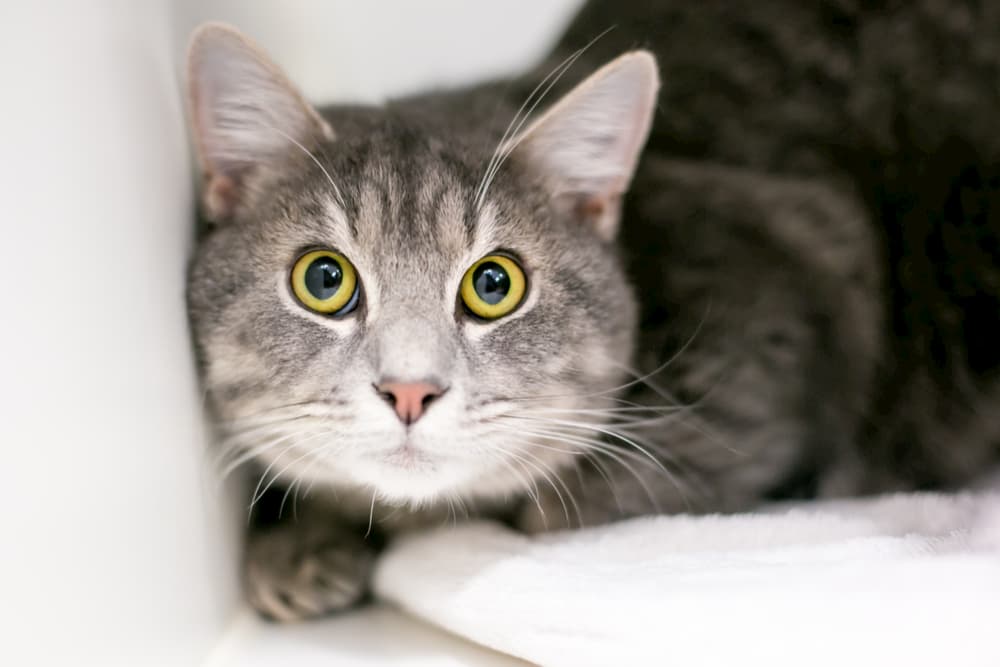 A cat who hisses frequently at people or other pets may be very anxious, says Stelow, who is board-certified in veterinary behavior. “This anxiety should be addressed so that the cat feels more comfortable in its environment,” she says. “A visit to the vet or a veterinary behaviorist should be the first stop.”

If cats frequently hiss at each other, it’s possible to improve their relationship with behavior modification. “But owners should be aware that they may never actually get along,” Stelow adds. “Aggression can arise suddenly between cats that have been fine together for months or years.”

Regardless of the circumstances, excessive hissing is a sign of fear, Stelow says. “This should not be overlooked and a cause and solution should be found.”

Cat Hissing: When to Worry 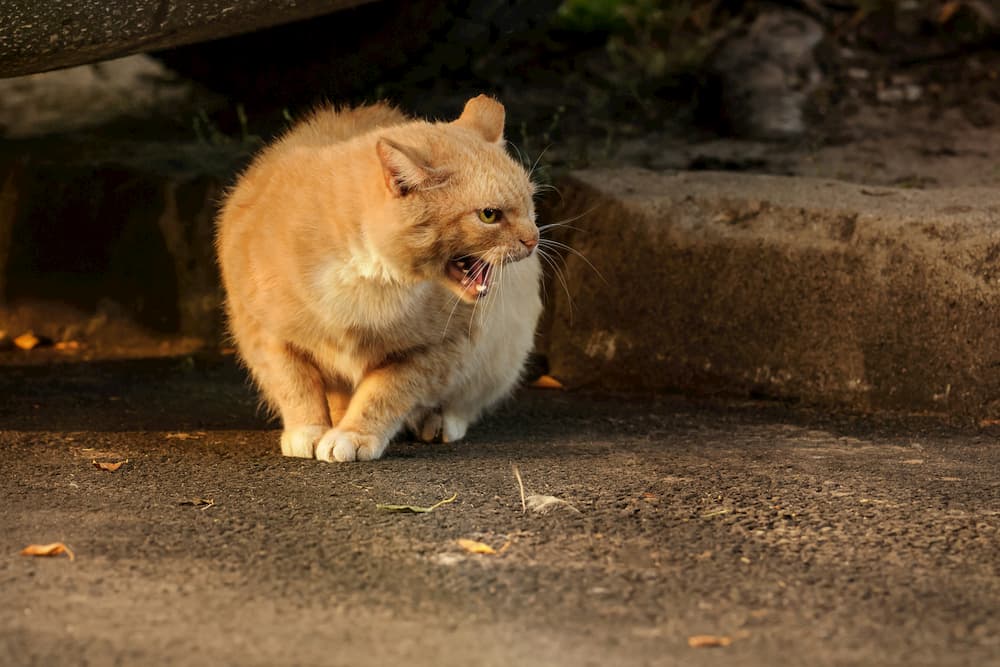 A cat who hisses frequently should be evaluated by a veterinarian to rule out internal pain or discomfort, says Gibbons. “An animal behaviorist may be consulted if the hissing is determined to be from psychological origin.”

And of course, this applies to signs of obvious distress. “If your cat appears to be in pain, have an injury, or is at risk of injuring another pet or person in the house, don’t hesitate to seek immediate help,” adds Demos.

Other signs that could indicate that the hissing may be due to a medical problem include the following, according to Gibbons.

A cat who normally doesn’t hiss, then suddenly starts up may be a cause for concern, says Demos. “The first step is generally to try and get a video whenever it comes to unusual or new behaviors,” she says. “That way you can show your vet to get their specific thoughts on what is happening.”

If you’re in doubt about what the hissing means or you see behavior that’s out of the ordinary, check with your veterinarian, advises Bennett. “Any change in a cat’s behavior or normal routine should be viewed as a potential red flag.” 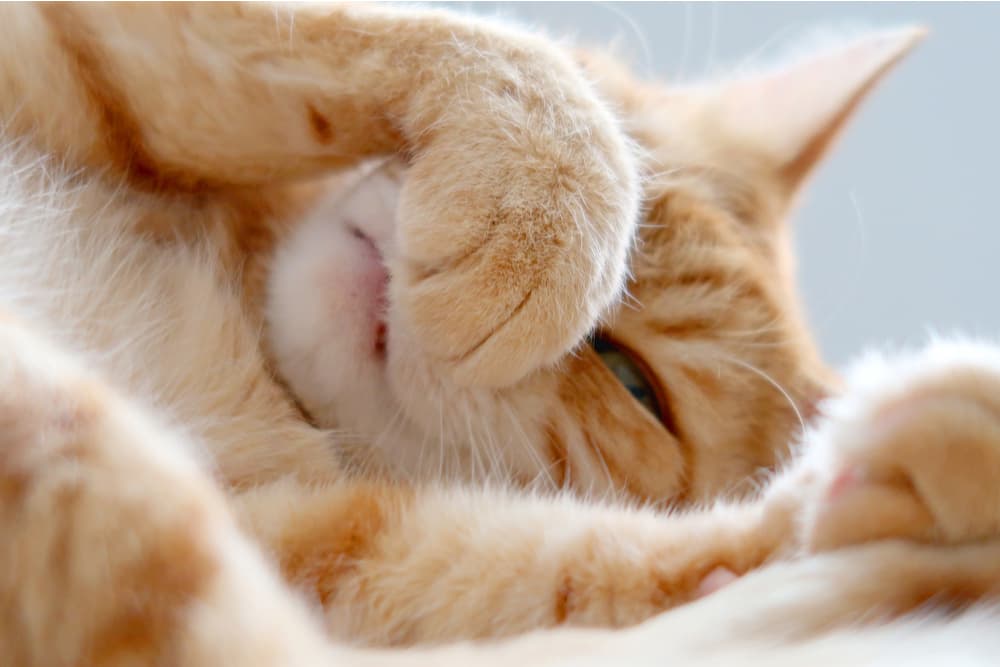 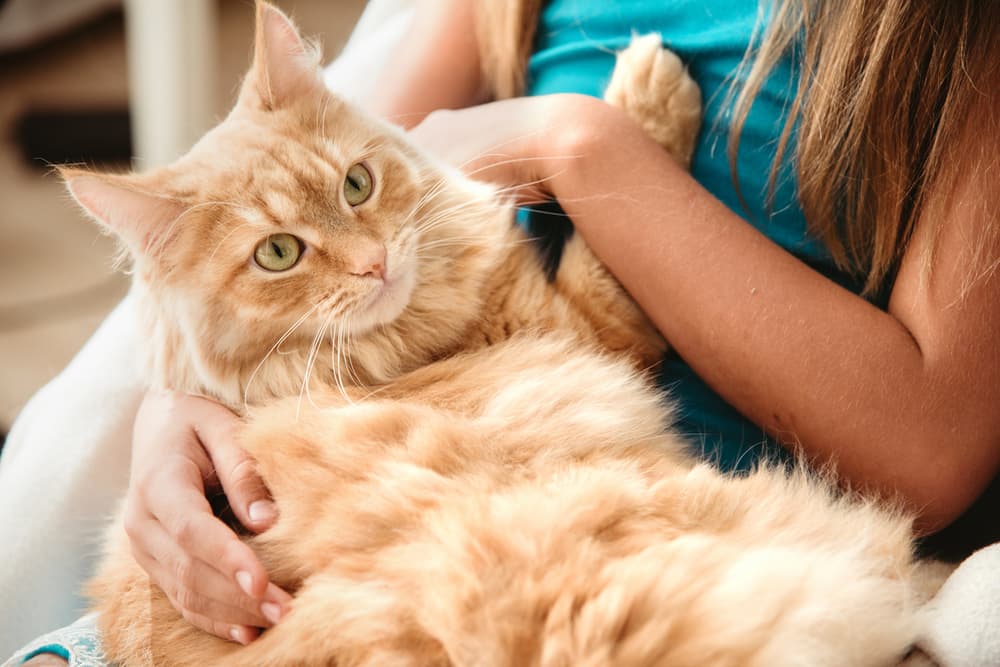 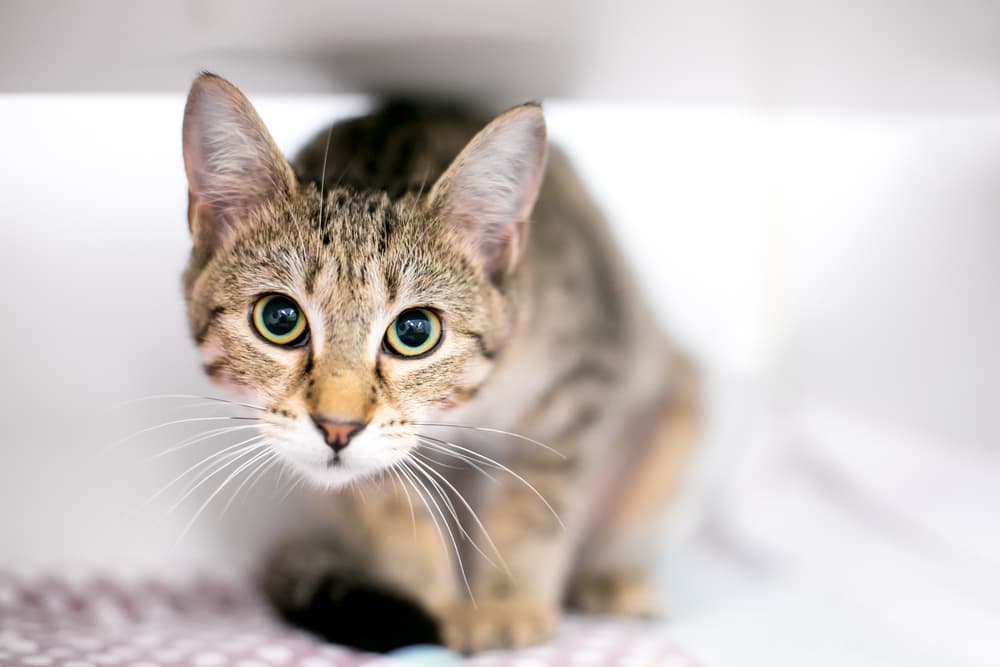 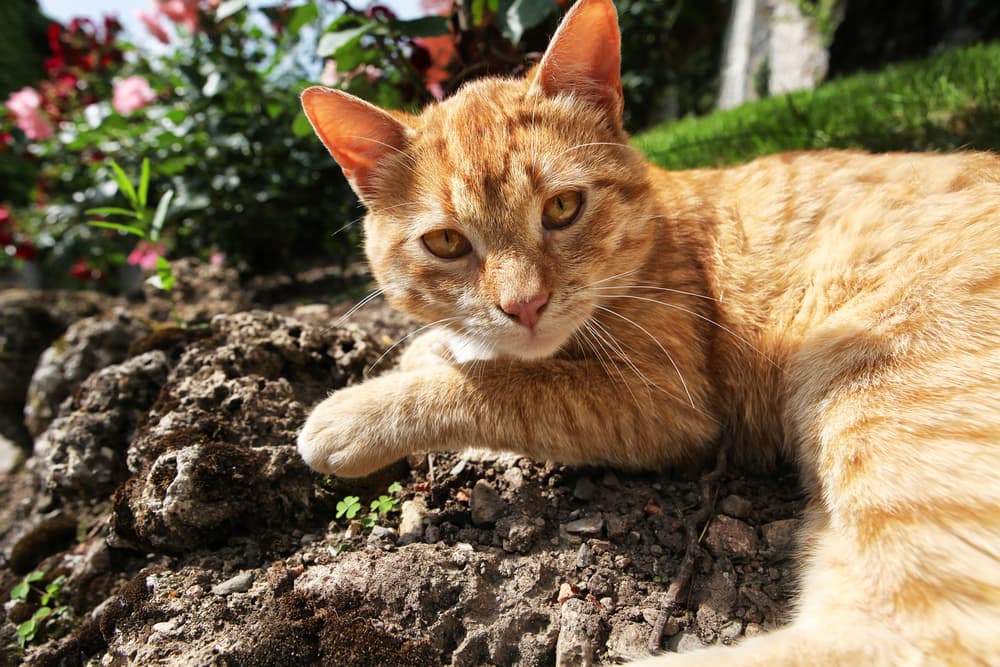 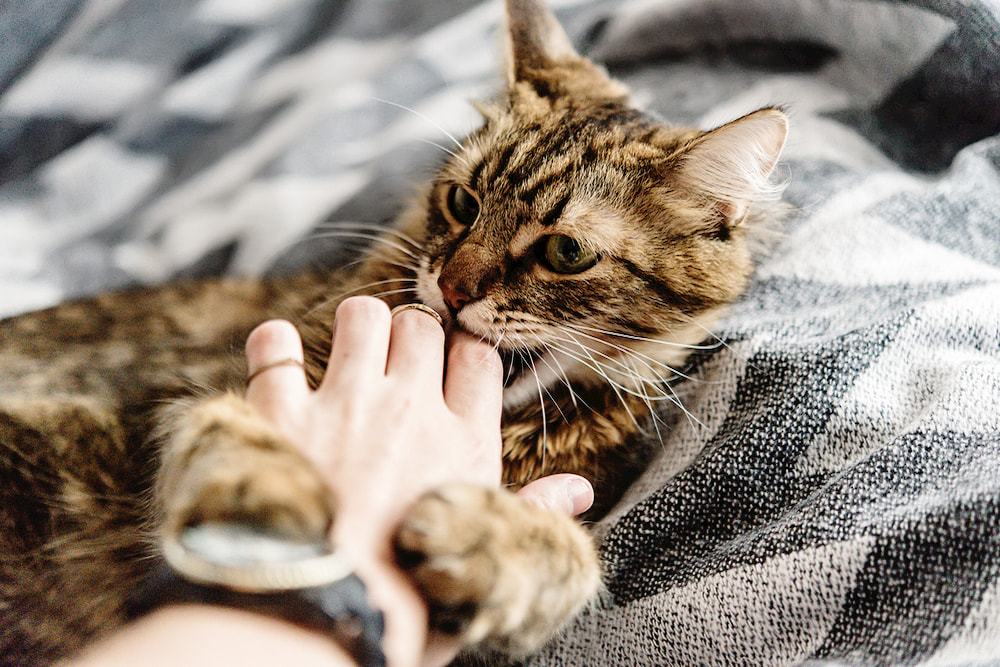 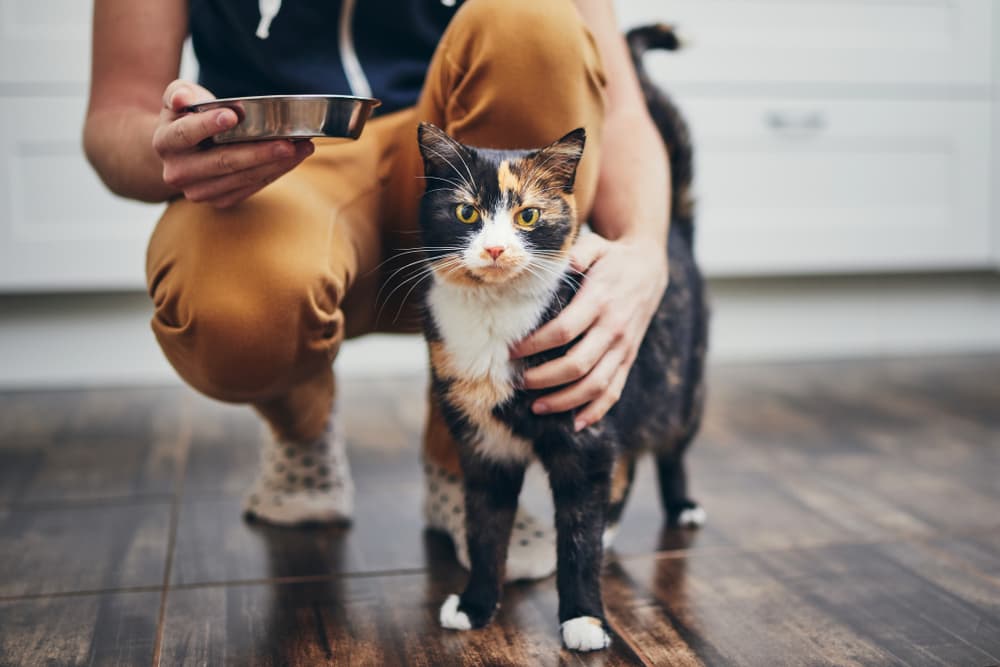